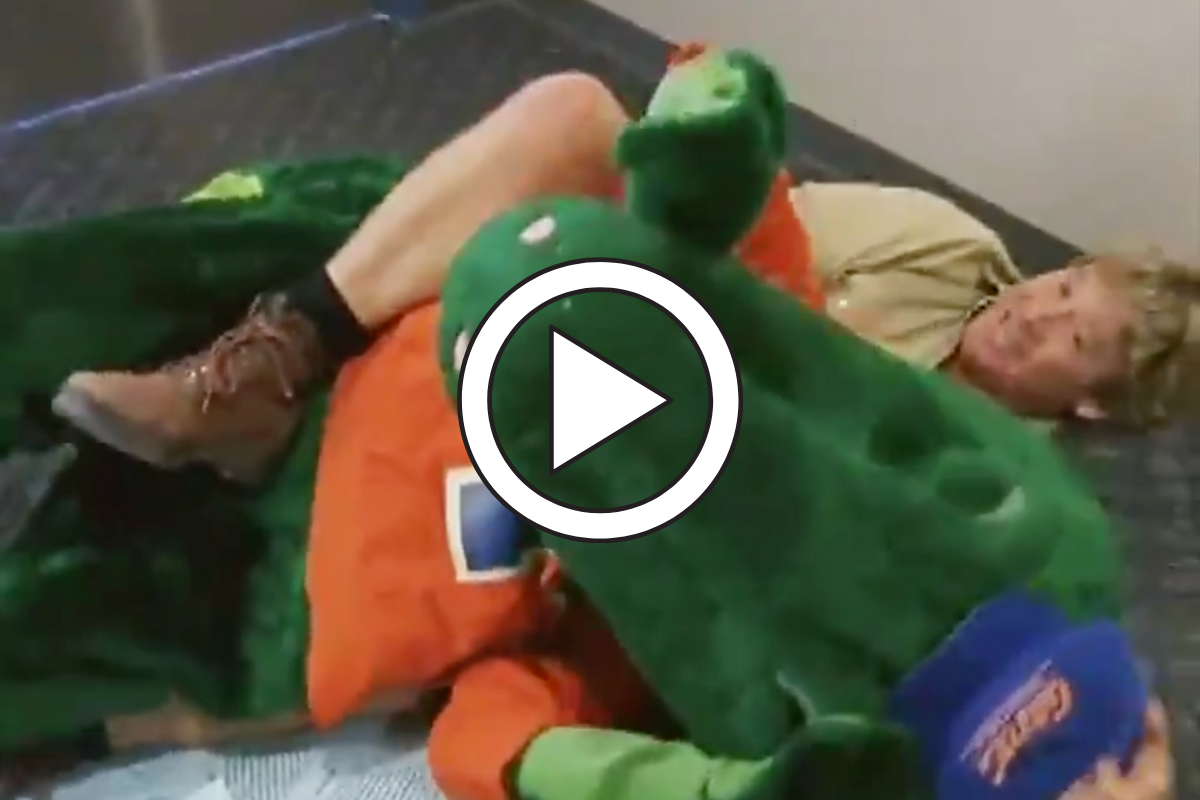 Remember Steve Irwin? I mean, how could you ever forget “The Crocodile Hunter” who championed animal conservation and education alongside his wife Terri for decades, while handling dangerous animals the rest of us wouldn’t consider touching?

Even today, the Irwin name lives on through his children, Robert and Bindi Irwin, as well as numerous parks and zoos. An asteroid was even named Crikey in the Australian’s honor. I watched Irwin bring an alligator on the Tonight Show with Jay Leno and laughed at the sheer size of that man’s cajones.

But through all of Irwin’s glorious work, no moment was as perilous as when he took on a 6.5-foot tall alligator named Albert.

Alright, so it wasn’t a “real” alligator. But that doesn’t mean Albert, the official University of Florida Gators mascot, doesn’t have a nasty bite if you cross him.

In one of the more famous “This Is SportsCenter” commercials, Irwin chatted about his TV airtime on ESPN alongside anchor John Anderson. Suddenly, as the elevator opens, Irwin springs into action when the blue and orange Florida Gator walks out. Irwin wrangles the beast while shouting, “Isn’t he gorgeous? I’ll have him subdued any minute now.”

“I’ll catch up with you later,” Anderson says, leaving The Crocodile Hunter to his work.

Hands down one of my favorite ESPN commercials ever.

On September 4, 2006, Irwin was filming a documentary in Queensland when a short-tail stingray “propped on its front and started stabbing wildly with its tail,” according to a witness. One of the strikes pierced Irwin’s heart and caused him to bleed to death. Video of Steve Irwin’s death was later destroyed.

The news shocked the world as the seemingly invincible animal lover was killed in a freak accident. His memorial service was held at the Australia Zoo with thousands in attendance. Steve Irwin was 44 years old.

In 2020, the University of Florida’s Twitter account saluted Irwin’s iconic commercial on what would have been his 58th birthday.

Today would have been Steve Irwin’s 58th birthday, so let’s celebrate him by watching him wrestle his pal @AlbertGator on @SportsCenter. #GoGators pic.twitter.com/y2dIUPlWgb

There are conservation and animal wildlife experts who came as a result of Irwin’s passion and courage, but there will never be another like him.