There is only one Tim Tebow. Love him or hate him, you can't deny he has a way of captivating people like few other figures in sports can.

Whether it be his "promise" speech that fueled the Florida Gators to their 2008 National Championship title or kind of saving a life in a minor league baseball game or even starring in a controversial anti-abortion Super Bowl ad, Tebow has an undeniable aura that people just can't seem to get enough of one way or the other.

A main reason Tebow -- despite all the good he's done in the world -- is so polarizing is because he's so outspoken in sharing his Christian faith that some of his detractors classify it as too shove-it-down-your-throat.

Never was that more evident than in the 2009 BCS National Championship game between Florida and Oklahoma. Tebow wrote a Bible verse, "John 3:16," in eye black beneath his eyes for the game -- a practice that was later banned by the NCAA in 2010. Then, 90 million people googled the verse that reads, "For God so loved the world that he gave his one and only Son, that whoever believes in him shall not perish but have eternal life."

Here's where it gets weird, though.

RELATED: Tim Tebow's Net Worth: How Faith & Football Made Him a Millionaire

Exactly three years after Tebow shared his message with the world, he inadvertently did it again during his first NFL playoff game with the Denver Broncos against the Pittsburgh Steelers in 2012.

Besides leading Denver to an overtime win -- thanks to a game-winning 80-yard pass to Demaryius Thomas -- he invoked some pretty surreal numbers relating to the biblical line he repped in '09.

Before making his way to the postgame press conference, Tebow explained he was stopped by a public relations person who began explaining to him what just occurred.

"'I don't think you realize what happened. During the game you threw for 316 yards, your yards per rush were 3.16, your yards per completion were 31.6, the ratings for the game were 31.6, the time of possession was 31:06.' During the game, 90 million people had already Googled John 3:16 and it was the number one thing trending on Facebook and Twitter. A lot of people will say it's coincidence. I say big God." 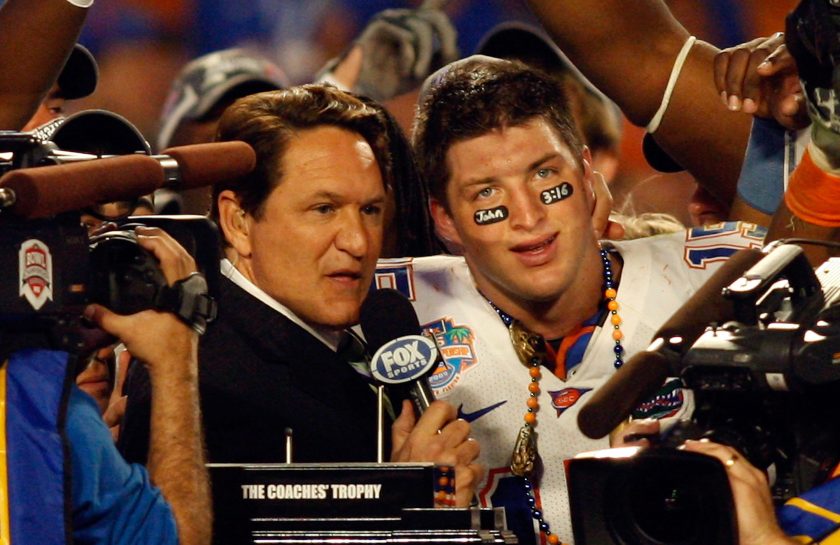 Now, was this just a random coincidence? Was it humans searching out those numbers to fit a narrative? Or was it some sign of divine intervention? That's up to you to decide.

As for Tebow, his background makes his existence something of a miracle in itself. His parents were Baptist missionaries in the Philippines before his mother, Pamela, contracted amoebic dysentery and fell into a coma. This caused complications in the pregnancy. Doctors advised her to have an abortion. She gave birth to Tim in August of 1987.

The 34-year-old grew up in Jacksonville, Florida, before excelling in sports and using his platform to share his message. Regardless of what you believe, it's hard to argue some of the details of this story don't raise your eyebrows a little bit.