Trevor Lawrence a Florida Gator? Let’s Cry Over What Could’ve Been 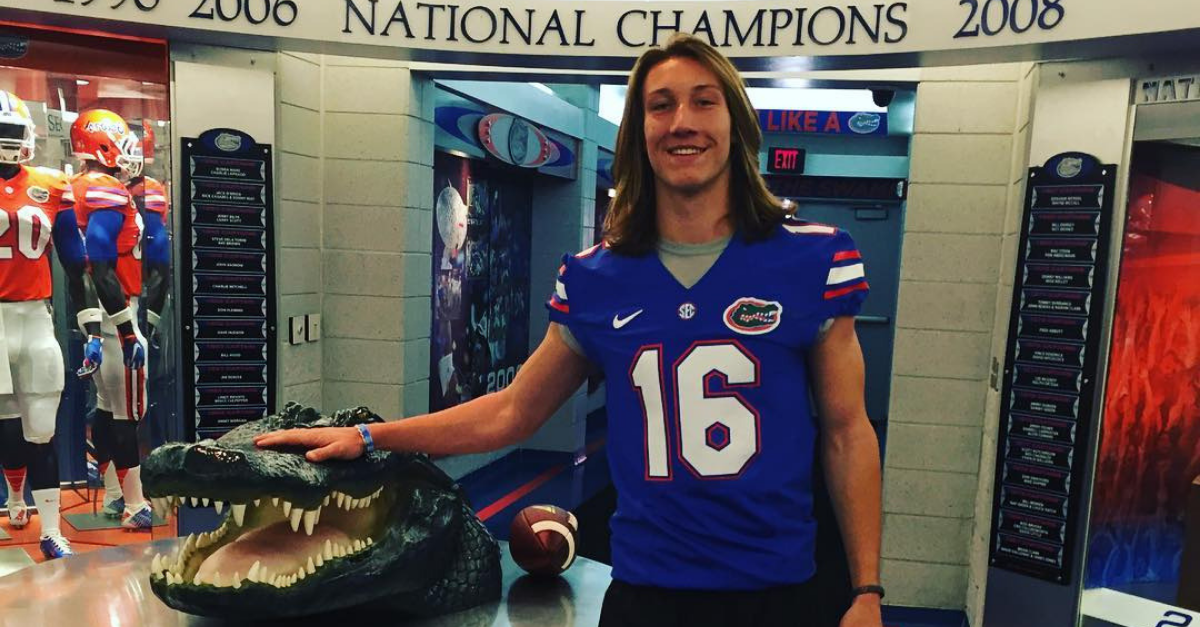 Clemson quarterback Trevor Lawrence is one of the hottest names in college sports. The Tigers’ wunderkind became the first true freshman quarterback to start and win a national championship game since Oklahoma?s Jamelle Holieway in 1985. He dismantled the Alabama Crimson Tide to the tune of 347 passing yards and three touchdowns, which resulted in a 44-16 beatdown in the CFP Championship Game’s latest installment of the Alabama-Clemson rivalry in Santa Clara, California. As a sophomore, he’s back in the national title game and STILL hasn’t lost as a starting quarterback in college football.

Lawrence was already topping 2021 mock drafts long before his breakout performance, and if NFL teams aren’t salivating over his arm, accuracy and poise, they probably weren?t watching the game. He?s been called Peyton Manning “except he?s more athletic with a better arm.” He?s everything you dream of in a starting signal caller, and he almost went to the University of Florida.

OK, maybe the Gators were never one of his top college football choices. But it was clear back in 2016, when Lawrence was rated 247Sports‘ No. 1 overall prospect in the 2018 class, that Florida wanted him. They offered him a scholarship, and he even visited Gainesville during UF?s orange and blue spring game in April of 2016. And he wore a freaking jersey.

Oh, the heartbreak. Florida fans have been waiting for a quarterback to take them back to national prominence since the Tim Tebow days. And no, half a season of Will Grier doesn?t count.

Lawrence ultimately chose between head coach Dabo Swinney’s Clemson Tigers and the Georgia Bulldogs, the two schools closest to his hometown of Cartersville, Georgia. But can you imagine? How much better would Florida be if Lawrence was throwing passes instead of Feleipe Franks or Kyle Trask?

Part of me also thinks Lawrence and UF wouldn?t have been the right fit, though. He could?ve similarly flopped in The Swamp the way former top quarterback prospect Jeff Driskel did. Instead, his name was filed in the “QBs Florida Missed Out On” folder alongside Lamar Jackson, Teddy Bridgewater, Jacob Eason and Justin Fields.

?They are going in the right direction, which obviously it looks like it,” Lawrence said of the Florida Gators three years ago. “[Florida has] coaching stability.”

Uh yeah, about that. Florida went 4-7 in 2017, and Jim McElwain was fired along with the rest of the coaching staff before Dan Mullen took over.

One thing?s for sure about Lawrence: he would?ve had Florida?s best hair by far. Punter Tommy Townsend is a close second, but Lawrence?s beautiful locks belong in a Pantene commercial. I mean, take a look and tell me you wouldn?t wear that mane as a wig.

What I also took from his jersey photo: his jersey number. Not many great players have come through Gainesville wearing No. 16. Wide receiver Freddie Swain wore it in 2018, but I?m sure he wouldn?t have minded giving it up. Sigh, I guess we?ll have to settle for more Kyle Trask touchdown passes for now.

Lastly, go ahead and scroll back up to check Lawrence?s facial expression in that Gator gear. Now look at his expression here:

I mean, it doesn’t get any better…

This article was originally published January 9, 2019.