Brock Bowers has never been the biggest player on the football field, though a 6-foot-4 frame weighing in at 230 pounds is nothing to scoff at. But he's always been one of the most athletic.

The 2022 John Mackey Award winner, which is given to college football's top tight end, is undoubtedly the bonafide star of the Georgia Bulldogs football program. His 726 receiving yards and six touchdowns (plus another three rushing) leads a team that is undefeated and on the verge of capturing the NCAA's first back-to-back national championships since Alabama from 2011-12.

Yet again, Bowers' freaky athleticism, blazing speed and rangy catch radius will be on display when Georgia takes on Ohio State Saturday in the Peach Bowl College Football Playoff semi-final game. What's wild is that he might not even be the most athletic person with the last name Bowers inside Atlanta's Mercedes-Benz Stadium.

That's because Brock Bowers parents put together quite the sports family.

Brock Bowers Has Elite Athleticism in His DNA 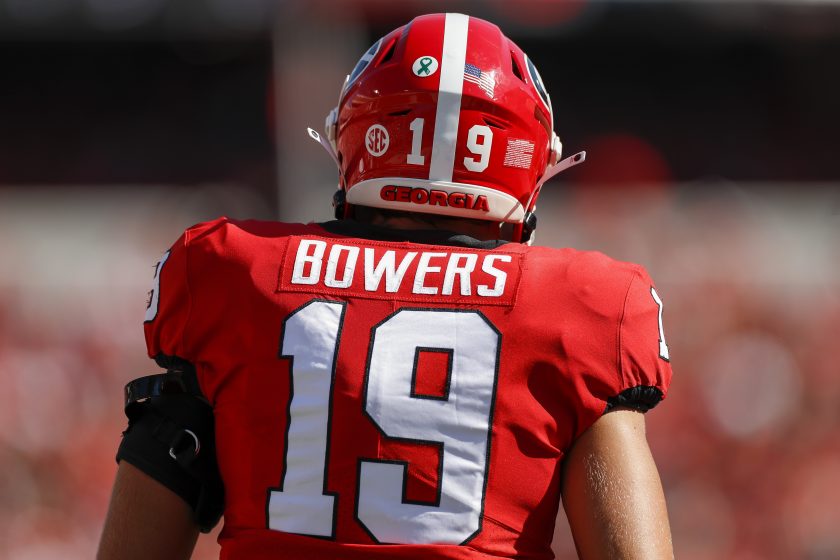 Bowers grew up a West Coast kid. He was raised in Napa, California, where he blossomed into a four-star recruit. Brock Bowers parents are DeAnna and Warren Bowers, whose names might not mean anything to you unless you're familiar with Utah State athletics.

First, there's pops. Warren was an All-Big West center for the Utah State Aggies in the '90s. Then, you have who some in the family might consider the best athlete in the family.

This didn't make our story on #UGA tight end Brock Bowers, but too good to not share:
Both Brock's parents were college athletes & his sister played college softball. Asked his dad how competitive they were ... told this great story about *taunting* other families at LegoLand ?? pic.twitter.com/mo323caKsR

DeAnna Bowers was a four-year starting pitcher at Utah State, which is where she met Warren, and she's just one of seven players in school history to ever earn All-America honors. She even helped the Aggies reach the NCAA Tournament in 1992 and 1993 and was inducted into the Utah State Athletics Hall of Fame in 2016. One local newspaper even referred to her as a "living softball legend."

One of just 7 @USUSoftball players to earn All-America honors, DeAnna Earsley-Bowers was a four-year starting pitcher and helped the Aggies earn back-to-back trips to the NCAA Tournament. She still holds a spot on every pitching record list.#WomenWednesday | #AggiesAllTheWay pic.twitter.com/flspvTsLp3

Even Warren admits he gets a little annoyed when people bring the Hall of Fame fact up.

"It's relatively irritating because it gets brought up a lot," Warren told the Atlanta Journal Constitution. "Everyone thinks someone brought everything to the table, and it wasn't me. I'm reminded of that a lot, by a lot of people."

That probably isn't all true, because Warren stands about the same height as his star tight end son. It was a genetic recipe for the college football gods, clearly.

Those genes also produced Brock's sister, Brianna Bowers. She played softball at Sacramento State, where she was an honorable mention all-Big Sky Conference selection as a true freshman after hitting .333. Injuries derailed her next two seasons and she didn't appear on the school's roster last season.

Bowers could've continued the family legacy at Utah State -- they offered him a scholarship back in July 2019 -- but he had bigger things in store for him.

Three years later, Bowers, quarterback Stetson Bennett and head coach Kirby Smart are hoping to do the seemingly impossible. Maybe then Brock Bowers will be considered the undisputed best athlete in the family.