Brock Bowers is not like other tight ends. Sure, he has great size for the tight end position with a 6-foot-4, 230-pound frame, but what separates Bowers from his peers is the impact he made in his first year in Athens.

Take a look at this: Bowers had more receptions, receiving yards and touchdowns than NFL studs Kyle Pitts, T.J. Hockenson, Travis Kelce and George Kittle had during their entire freshman years. COMBINED. Freshmen don't do that.

In his sophomore season, Brock Bowers has yet again become a top offensive option for the Georgia Bulldogs while continuing to establish himself as the best tight end in the country.

RELATED: How Did Stetson Bennett Earn His "Mailman" Nickname?

Arizona State, Auburn, California, LSU, Michigan, Nevada, Notre Dame, Oregon State, Penn State, Tennessee, UCLA, USC and Utah State were all aiming to recruit Bowers, but the offer the Bulldogs made was too enticing. Clemson was involved in the recruiting process as well, but the Tigers never formally reached out.

The four-star tight end was a key member of head coach Kirby Smart's 2021 football recruiting class. UGA finished as fourth-best bunch in college football with only Alabama, Ohio State and LSU ranked ahead. But as Texas A&M head coach Jimbo Fisher found out in 2022, just because you have a top recruiting class, doesn't guarantee success.

In this video, you can see tight end Brock Bowers' athleticism on display. He ran a 4.55-second 40-yard dash, and he can get past linebackers with ease. He blocks well, but his real calling is as a route-runner.

For the final three seasons of his prep career, Bowers played for Napa High School in California. He first showed up on the radar of college football coaches in his junior year, when he posted 1,098 receiving yards and 14 touchdowns, which were both school records. 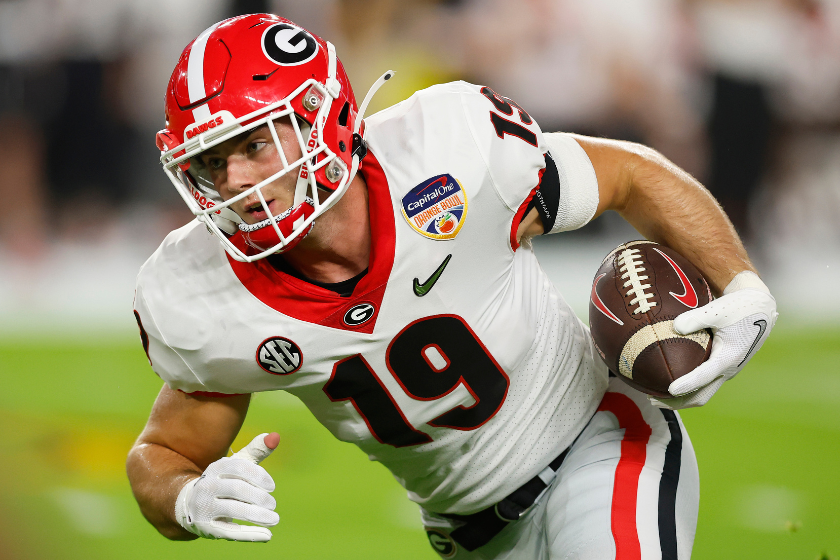 Brock Bowers was poised to be special at the University of Georgia. We didn't anticipate he would be this special this quickly. The trust in Bowers was apparent from the first play from scrimmage against Clemson, when he caught a seven-yard pass from quarterback JT Daniels. It was only a glimpse of what was to come.

Through his first four games, Bowers led the team with 18 receptions, 272 receiving yards, four receiving touchdowns and one rushing touchdown. The true freshman tight end immediately turned into a favorite target for JT Daniels and Stetson Bennett due to his size, athleticism and reliability.

Just look at that speed on his 88-yard touchdown against UAB.

His performance on the field have teammates singing his praises, per The Macon Telegraph:

"He's a freak athlete who can do anything on the field," safety Christopher Smith said.

Bowers was sure to make the freshman All-American team and added  SEC Freshman of the year, First-team All-SEC honors to his 2021 resume.  And to top it all off, Bowers won the John Mackey Award, given to the nation's best tight end. Oh, and then there's the 2022 National Championship he helped Georgia win. There are good seasons, great seasons and then there's Brock Bowers' 2021 season.

Georgia fans are ecstatic they have at least two more years of Bowers. The rest of the SEC? Not so much. They're hoping Bowers declares for the NFL Draft early.

This post was originally published on December 1, 2020, but was updated after Bowers began solidifying himself as the country's best tight end.