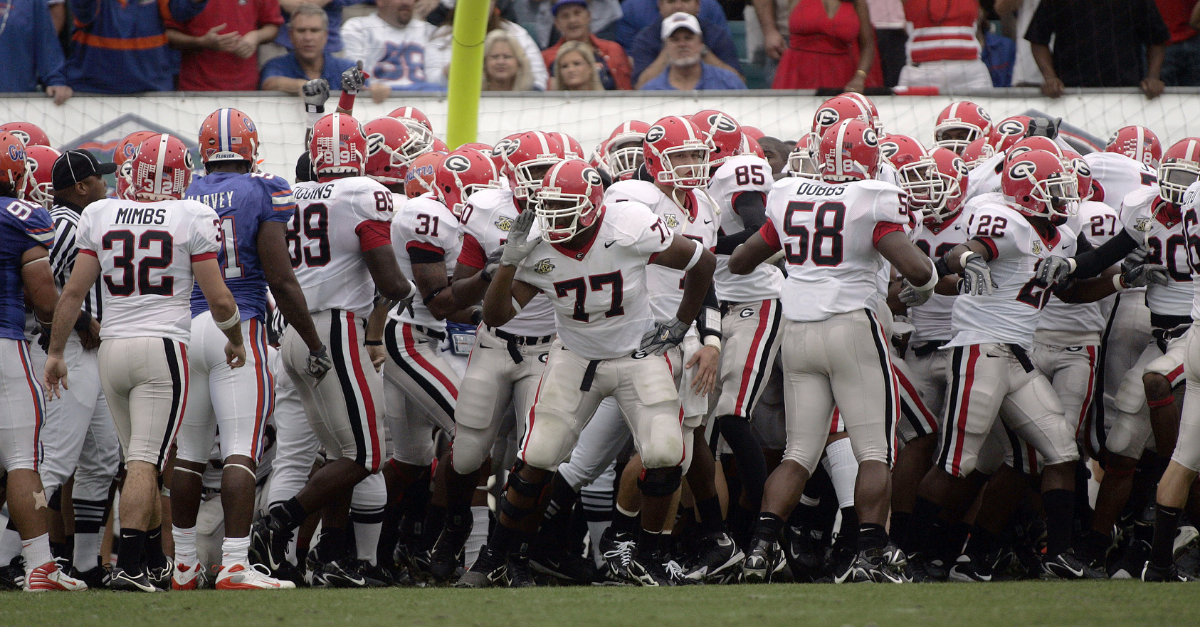 Back in 2007, the World’s Largest Outdoor Cocktail Party was anything but one of college football’s best rivalries. From 1990 through 2006, the Florida Gators had beaten the Georgia Bulldogs 15 of the 17 times they played each other. The annual rivalry game in Jacksonville was getting a little lopsided, but former Georgia head coach Mark Richt had a plan to get his team fired up and ready to turn the tide.

Early in the first quarter, Georgia running back Knowshon Moreno leapt into the end zone for the game’s first touchdown. It was a huge momentum boost for the Dawgs, but it didn’t end there. Before the game, Richt instructed his team to go wild in celebration after their first score, thinking only the 11 players on the field would take part. Suddenly, 70 Bulldogs stormed the field and went nuts in the end zone, which drew more flags than the Daytona 500.

Georgia received two unsportsmanlike conduct penalties and kicked off from their own 8-yard line, but in the end, it was absolutely worth it. The UGA faithful went absolutely bananas as the 20th-ranked Dawgs went on to knock off the ninth-ranked Gators, 42-30.

Matthew Stafford tossed three touchdown passes while Moreno rushed for a career-high 188 yards and scored three touchdowns of his own, but none were bigger than his first score. The planned celebration went further than Richt anticipated, and he later apologized to both the SEC and the Florida Gators for the celebration in Gainesville.

“Again, I was expecting the 11 players on the field to be doing the celebrating, not for the bench to clear as it did.

I understand that the entire team running on the field created the potential for an altercation and that excessive celebration is not in compliance with the Southeastern Conference sportsmanship policies and expected standards. My only intention was to create enthusiasm.”

Florida quarterback Tim Tebow struggled for much of the game, completing 14 of 22 passes for 236 yards, but he was sacked six times on the afternoon by Georgia’ defense.

However, the Gators did not forget about what happened and steam rolled Georgia the following season, 49-10, for the second-worst loss of the Georgia-Florida series all time.

Moments like this make college football rivalries great, but Georgia might stand the tallest for their awesome celebration as Urban Meyer and his University of Florida team helplessly watched from the sideline.

This article was originally published March 15, 2019.

READ MORE: Georgia?s All-Time Starting 5 Would Score on Anybody and Everybody