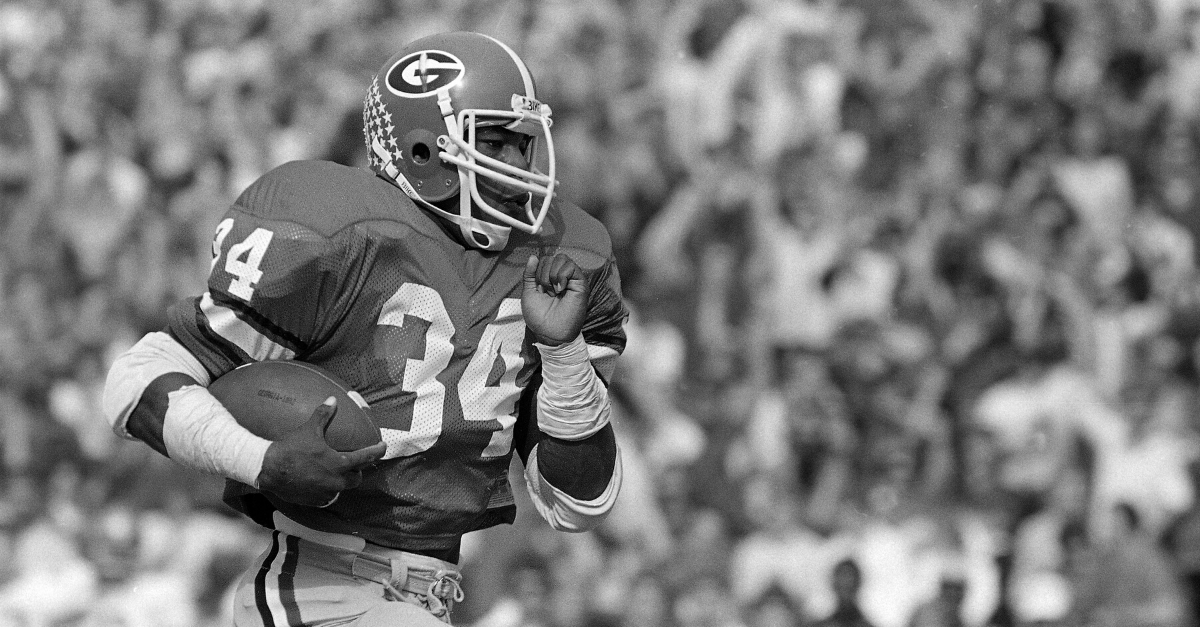 The Heisman Trophy is reserved for only the elite players who come through college football. While some Heisman winners end up ranking as the worst quarterbacks in NFL history, others go on to have Hall of Fame careers at the next level in addition to their success in college.

While he’s not an NFL Hall of Famer, former Georgia Bulldogs running back Herschel Walker was a man amongst boys playing in Athens, and he beat out perhaps the most impressive class of finalists ever assembled to run away with 61-percent of the vote to win the 1982 Heisman Trophy.

Coming off a season in 1981 where Walker put up 1,891 rushing yards, 20 total touchdowns and LOST the Heisman race to USC running back Marcus Allen, the Wrightsville, Georgia product entered the 1982 season as the clear favorite to win the trophy as a junior.

Despite suffering a broken thumb during a practice in August, Walker still managed to play in every game for the Georgia Bulldogs as they rolled everybody on their way to an undefeated regular season, their third-straight SEC title, and a chance to play Penn State in the Sugar Bowl for the national championship. The Dawgs would lose that game, 27-23.

In the process, Walker showcased why he was the best player in college football racking up 1,752 rushing yards and 17 total touchdowns on his way to finally winning the Heisman Trophy after finishing top-3 in the Heisman voting all three seasons he was at Georgia — Walker is still the only player in college football history to accomplish that feat.

Who did Walker beat out to win his Heisman Trophy? How about Stanford quarterback John Elway, SMU running back Eric Dickerson, Penn State quarterback Todd Blackledge, and Pittsburgh quarterback Dan Marino, all of whom where seniors while Walker was one year younger than the rest of the field.

The greatest player in school history left the Georgia football program the following year after being a three-time First-Team All-SEC selection, earning three-straight consensus All-American honors, and being named SEC Player of the Year three years in a row.

By all accounts — from Walker carrying the Dawgs to the competition he beat out to finally claim the Heisman — that 1982 season was absolutely dominant and makes a strong case as the greatest Heisman season in history.

Due to NCAA rules barring players who hadn’t finished their senior year from entering the NFL Draft, Walker left Georgia the following spring to star for three seasons in the United States Football League playing for the New Jersey Generals football team — he casually scored 61 touchdowns during his first three years of pro football.

After being claimed by the Dallas Cowboys due to the USFL failing, Walker would make two-straight Pro Bowls in 1987 and 1988 before the most lopsided trade in NFL history.

Walker’s NFL career is mainly remembered for the “Herschel Walker Trade,” where the Minnesota Vikings traded five players in six draft picks to the Dallas Cowboys to get the 1982 Heisman Trophy winner. The iconic trade launched a Cowboys’ dynasty that spanned three Super Bowl titles and produced several Hall of Fame talents, while Walker would go on to play for the Vikings, Philadelphia Eagles and New York Giants over the next eight seasons.

He would only rush for more than 1,000 yards one more time before retiring in at the end of the 1997 season with the Cowboys.

The College Football Hall of Fame running back parlayed his football fame into a mixed martial arts career at the age of 50, which isn’t hard when you do 5,000 sit-ups and 5,000 push-ups every day as a kid.

His legacy might be tied more to what a single trade did for the NFL, but to forget what Herschel Walker did during his college career playing for the coach Vince Dooley at the University of Georgia is a disservice to his greatness.

This article was originally published December 4, 2018.