Herschel Walker is the greatest running back in University of Georgia and SEC history. More than 5,000 rushing yards, an NCAA national championship and the 1982 Heisman Trophy Award (when he brought Uga the dog to the ceremony) are just a few of the football player's collegiate accomplishments.

While you may remember that Walker was a United States Football League star or the centerpiece in the worst trade in National Football League history, you may not know he was an Olympic bobsledder, professional MMA fighter and reality TV show guest. Like his days as a running back, Walker is a versatile man of many talents and athletic gifts.

Walker has certainly taken advantage of those. From becoming the highest-paid running back in both the USFL and NFL to owning three separate companies, Walker has built a sizable net worth not limited to just football contracts.

Let's take a look at how he built his fortune.

Born in Augusta, Georgia to Willis and Christine Walker, Herschel grew up in Wrightsville, Georgia. He was a three-sport star at Johnson County High School, where he was valedictorian of his class and won the first Dial Award in 1979 given to the nation's high school scholar-athlete of the year.

He committed to the University of Georgia and helped the Bulldogs win a national championship in 1980 en route to winning three-time All-American honors, the 1982 Maxwell Award, the 1982 Walter Camp Award and three-time SEC Player of the Year.

That three-year career was worthy of the College Football Hall of Fame. He married college sweetheart Cindy DeAngelis Grossman in 1983, had one child, and divorced in 2002.

Walker signed with the New Jersey Generals on a three-year, $5 million deal in 1983. The USFL had team salary caps of $1.8 million but Generals owner J. Walter Duncan found a loophole and signed Walker to a personal services contract that incumbent owner Donald Trump would later take over.

Walker was an instant superstar in the USFL. He set the professional single-season rushing record of 2,411 yards in 1985 and scored 61 touchdowns over three seasons. The record-setting back signed a four-year extension that would've kept him in New Jersey through 1989 had the league not folded.

That's when the Dallas Cowboys drafted him in the fifth round of the 1985 NFL Draft in hopes he'd sign with them. Dallas signed him to a five-year, $5 million deal that included a $1.4 million signing bonus. He went on to make two Pro Bowls with America's Team.

The American football player's bank account grew even larger when the Cowboys traded him to the Minnesota Vikings in 1989 for a boatload of draft picks that birthed Dallas's 1990s dynasty teams.

? Oct. 12, 1989: The Dallas Cowboys trade Herschel Walker to the Vikings for 5 players & 7 picks and win 3 NFL titles in the next 6 seasons pic.twitter.com/MyFMMTNoYb

Owner Jerry Jones had to convince Walker to leave the Cowboys, though, and paid a hefty price to do so: $1.25 million in cash, two cars and a house in Edina, Minnesota, all of which came out to about $2.5 million.

Walker, who as of 2014 owned four houses in various cities including the gifted one, told the St. Paul Pioneer Press in 2015 he never thought Jones would agree to the demand:

"I didn't want to go, so me and my agent at the time, Peter Johnson, threw out a bunch of ridiculous stuff. We figured if we asked for a rocket ship, they weren't going to give us that. So we asked for houses and cars and all sorts of junk. We really didn't want the stuff. I didn't care about the money. We just threw it out because we thought they'd say no. And then Jerry agreed to it. He called our bluff."

Walker was never a great fit with the Vikings, and he signed a multi-year deal with the Philadelphia Eagles in 1992 worth an estimated $700,000 before joining the New York Giants for one year and ending his career with the Cowboys.

Over his 16-year NFL career, he likely earned more than $15 million. He reportedly now lives in Westlake, Texas.

Yay! Got my hands on a retro Adidas cut off Herschel Walker tee from 1983. Badass. @HerschelWalker #MyMan ??? pic.twitter.com/epBJscynW2

Walker said coming out of UGA that if he played in the NFL he wanted to play in New York or for the Dallas Cowboys to maximize his endorsement opportunities. He went to the USFL instead and signed a $1.8 million endorsement deal with Adidas, a four-year, $6 million deal with Trump and a five-year, $500,00 deal with Franklin Sports.

McDonald's reportedly also had an endorsement deal with Walker as well. In addition to Walker's salaries, these endorsements made him one of the sports highest-paid athletes.

In honor of the Winter Olympics opening, we bring you Viking RB Herschel Walker?s bid to win Olympic gold in the 1990 Bobsled competition. @HerschelWalker #vikings pic.twitter.com/lcT0TzbFde

Still in great shape at 47 years old thanks to a ridiculous push-up and sit-up regimen, Walker signed a multi-fight MMA contract with Strikeforce in 2009 to be a professional mixed martial artist. Though the terms of the deal were unknown, he went 2-0 in the ring with defeats over Greg Nagy and Scott Carson.

While still an NFL player, Walker competed in the 1992 Winter Olympics for the United States of America's bobsled team. He competed in the two-man event as a the team's pusher but ultimately placed ninth.

From mixed martial arts to the olympics (did you know he was actually a great sprinter as well?) and even TV, Herschel has done it all.

Herschel Walker stopped by the office today. We could tweet all day about how impressive he is, a true renaissance man. pic.twitter.com/HiUzxQmR

Walker's business ventures are a far cry from the horror stories of athletes blowing their earnings. The devout Christian owns three companies -- a chicken business that he calls "essentially a mini Tyson Foods", a drapery business, and a promotions company that works with Fortune 500 companies.

Though it's unknown just how much money Walker makes from these ventures, he told Fox Business that he employs more than 800 people throughout the South. 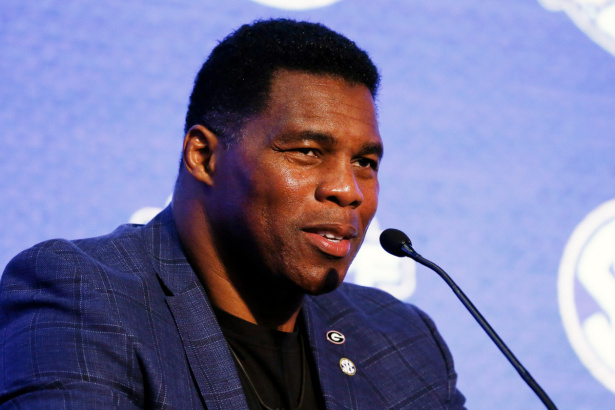 There's a lot to unpack in Walker's life as a professional football player and beyond those days. Clearly the former three-time All-American running back has never been afraid to take risks and dive into new adventures.

Walker's estimated net worth in 2021 is $12 million, according to Celebrity Net Worth. He's likely worth much more than that with his business ventures, however.