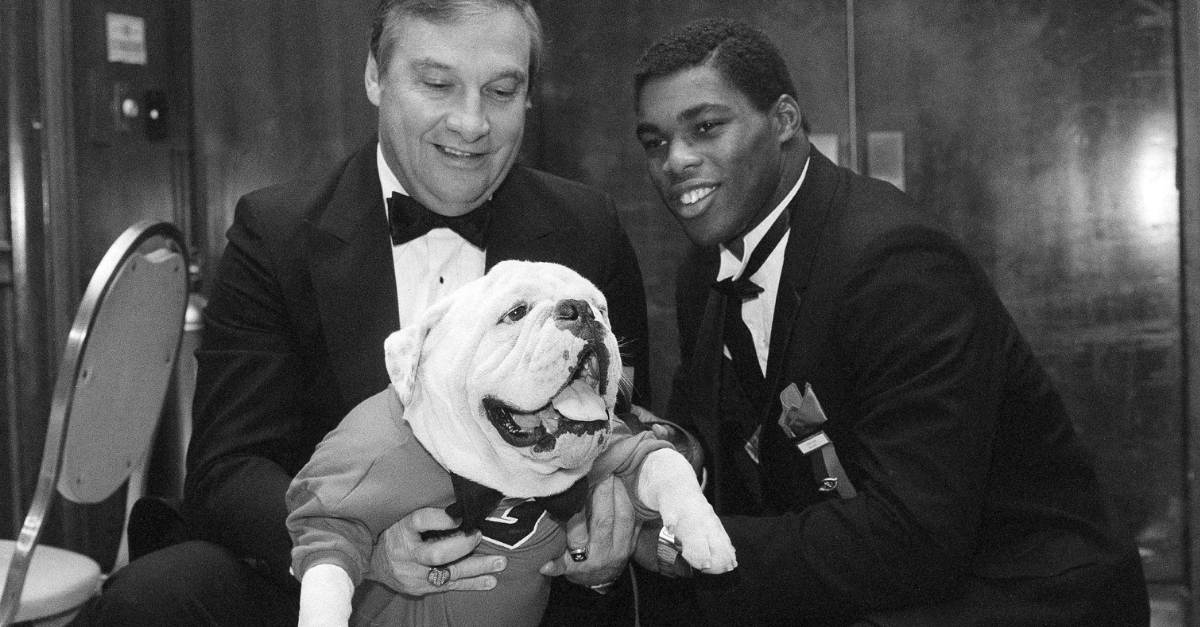 There may not be a more beloved mascot in all of sports than the University of Georgia?s ?Uga?. Since 1956, the wrinkly and adorable all-white English bulldog known for its red jersey and spiked collar has become a national treasure while roaming the sidelines of Georgia Bulldogs games at Stanford Stadium in Athens, Georgia.

In total there have been 10 Ugas ? all owned by the Frank W. “Sonny” Seiler family of Savannah, Ga. ?, and they?re all near and dear to Bulldog fans? hearts. Take for example when the entire state of Georgia freaked out over Uga X?s safety when Bevo, the Texas Longhorns’ 1,600-pound live mascot, charged at the 60-pound dog before last year?s Sugar Bowl between Georgia and Texas.

Uga?s history is a rich and sometimes glamorous one. Uga V, who began his tenure in 1990, rose to fame after gracing the cover of Sports Illustrated in 1990 and playing the role of his father, Uga IV, in the Clint Eastwood film ?Midnight In The Garden Of Good And Evil.? He?s still the only mascot to appear on the front of the magazine.

But maybe the coolest moment where Uga owned the spotlight was during the Heisman Trophy Banquet in 1982, when he shared the red carpet with one of the best running backs in college football history.

Herschel Walker was accepting his 1982 Heisman Trophy award in the Downtown Athletic Club in New York on Dec. 9, 1982. But what?s a special night like that without man?s best friend to accompany you? Photographers loved it, snapping pictures of the Heisman Trophy winner and the scrunchy-faced bulldog, who appropriately wore a black tie over his red shirt.

Uga is still the first and only mascot to ever attend the banquet. Maybe no other live mascot has returned because Uga stole the show from the Heisman winner.

Walker’s Heisman-winning season was the end of a legendary career at Georgia. On top of leading the Bulldogs to a National Championship in 1980, the three-time All-American and star out of Wrightsville, Georgia’s Johnson County High School, tallied more than 5,000 rushing yards and 52 total touchdowns and was enshrined in the College Football Hall of Fame. He finished in the top three in Heisman voting each of his three seasons.

A star during a brief three-year stint in the United States Football League (USFL) with the New Jersey Generals, Walker set the single-season pro football rushing record of 2,411 yards in 1985. He left for the NFL and played for the Dallas Cowboys alongside 1976 Heisman-winning running back Tony Dorsett in 1986.

Walker was also the centerpiece of what some dub the worst trade in NFL history in 1989. The Minnesota Vikings, looking to make a Super Bowl, traded away eight draft picks and five players for Walker and little else. The deal gave way to the Cowboys’ 1990’s dynasty that won three Super Bowls. Walker played just a few seasons in Minnesota before signing with Philadelphia in 1992.

As for Uga IV, he served as Georgia’s mascot from 1981 to 1989 and attended a bowl game every year during his tenure. The Bulldogs posted a 77-24-4 record during that time, making him one of the winningest Ugas ever.

How did the legend of Uga come to be? In 1956, Sonny Seiler and his wife, Cecilia, received the first Uga as a wedding gift. They took him to a regular season game and he was an instant hit. Head coach Wally Butts caught wind of the pup?s presence and asked Seiler for him to be the official mascot.

As Seiler describes in his book, “Damn Good Dogs!: The Real Story of Uga, the University of Georgia’s Bulldog Mascots,? a friend named Billy Young came up with the idea for Uga?s name, a play on the school?s abbreviation.

Although Uga IV died in 1990, he and past Ugas are immortalized at Sanford Stadium. Each beloved mascot is buried in a marble vault with their own personalized epitaph. Before each game, flowers are placed in their graves. This process is unique in college football, as Georgia is the only major college that buries its mascots in the confines of the stadium.

Uga may be the cutest live mascot, but he?s not the only one in college football or even the SEC. LSU has the intimidating Mike the Tiger. The Tennessee Volunteers have Smokey the bluetick coonhound. Even Division II North Alabama has a pair of lions ? Leo III and Luna ? that live on campus and sometimes attend games.

All we can ask from the NCAA is to let every Heisman-winning football player bring their live mascot to the ceremony, if their school has one. Could you imagine Jameis Winston riding in on Renegade the horse or Robert Griffin III traipsing to the podium on Joy the black bear? At least Herschel Walker understood.

This article was originally published May 10, 2019.