Quarterback is one of the most difficult positions to play in professional sports. The National Football League is notorious for chewing up and spitting out lower-tier quarterbacks faster than they can open the playbook (sorry about it, Brogan Roback). It's a demanding position that requires relentless individual preparation in order to be the field general on game day.

No quarterback makes it to the NFL by mistake. You can call it bad coaching or unfortunate circumstances playing for horrible teams, but in some cases, things just go awry. Regardless if they had a rocket arm, were college football standouts or were billed as dual-threat game-changers, some guys can't hack it in the pros. 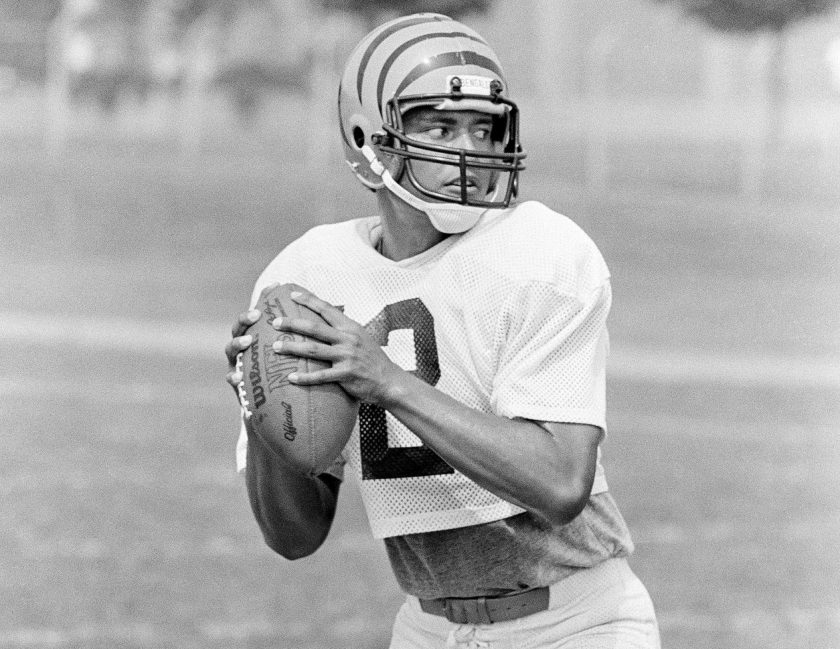 The "Throwin' Samoan" lands first on this list as one of the biggest draft busts at quarterback of all time. Selected third overall in the first round of the 1979 NFL Draft (the same draft that produced Phil Simms and Joe Montana), Thompson's college career was far more prolific than his professional one. At Washington State, he set numerous Pac-10 records and finished as college football's all-time leader in passing yards at the time.

In the NFL, he never won more than two games in a season as a starter and had a pro football career completion percentage of 53.1. Thompson was out of football after six seasons. 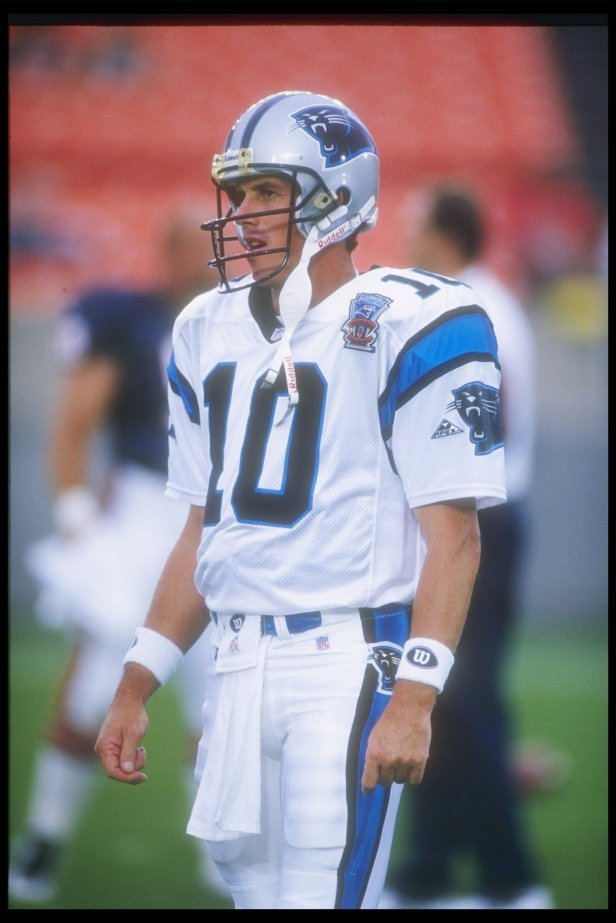 One of the longest-tenured NFL quarterbacks on this list, Trudeau played 10 seasons in the NFL. In college playing for Illinois, he set the NCAA record for most consecutive pass attempts without an interception (215). In the NFL, he threw an interception once every 23 throws. Trudeau's most famous fail was his rookie season, when he started 11 games for Indianapolis and managed to lose all 11 of them.

To his credit, he did manage to put together a decent season in 1989, winning seven games and having his only season with more touchdowns than interceptions. He's a mid-level bust being a second-round draft pick, but Trudeau is the ultimate "eh, he's just Jack" type of player.

Phipps is only quarterback on this list with a winning record, but the third overall pick in 1970 is here for one reason: Return On Investment. Phipps was originally drafted by the Miami Dolphins, who then traded him to the Cleveland Browns. And who did the Browns give up? Future Hall of Fame wide receiver Paul Warfield, who went on to be a member of two Super Bowl teams in Miami.

Phipps did quarterback two NFL teams that had combined records of 19-4, but when you throw nearly twice as many interceptions as touchdowns, and complete less than half your career passes, your teams are winning in spite of you... 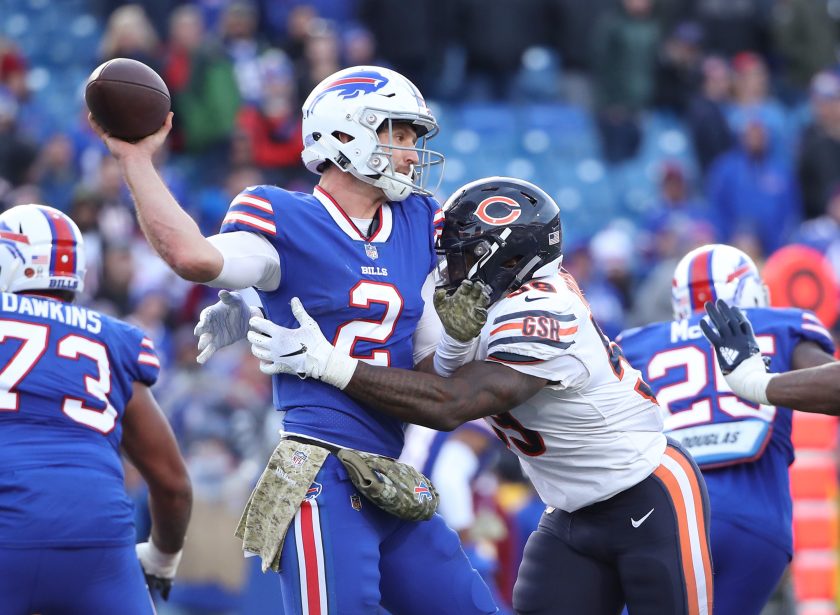 That Nathan Peterman still has a job will always be mind-boggling. In an age where throwing the football has never been easier (just ask older guys like Joe Namath), Peterman somehow managed to be the laughing stock of the NFL during his infamous five-interception game in 2017. His season-by-season QBR looks like this: 12.4, 8.0, 24.3 and 1.3. Yet the Chicago Bears currently employ him in 2022. Nathan Peterman definitely deserves a spot on this list, but you've gotta give him credit for somehow sticking around. Maybe he's just a tremendous locker room guy. 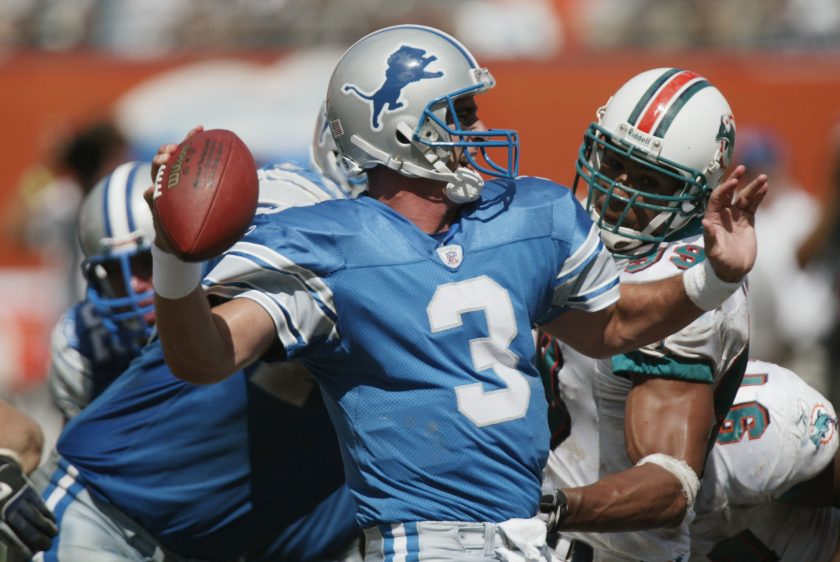 One of the biggest "what if" stories in this countdown is the Oregon Ducks product, Joey Harrington. One of the Ducks' most prolific offensive players of all-time, Harrington was buried on a poorly managed and coached Detroit Lions team for the first four seasons of his career. Still, when you're selected third overall, you have some responsibility to carry the franchise that selected you.

Harrington led the NFL in 2005 with 22 interceptions, and he only once finished a season with more touchdowns than picks. After his Lions career fizzled out, he became a journeyman backup for three different franchises before leaving football for good in 2009. 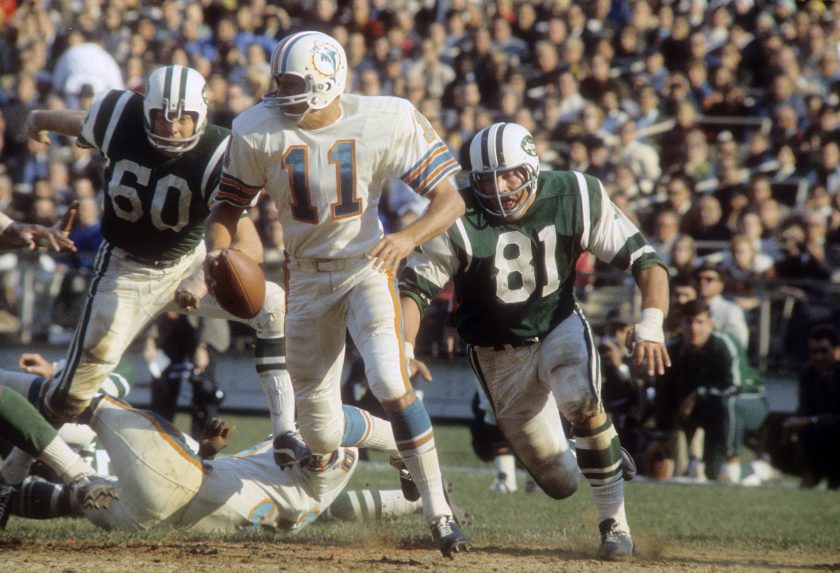 A member of the Kentucky Wildcats Hall of Fame, Norton was drafted second overall in the 1966 AFL Draft to play for the Miami Dolphins. While the passing game wasn't as developed as it is today, Norton helped set the standard for exactly what not to do as a quarterback. He once went 7-of-26 for 43 yards and five interceptions in a 32-7 loss to the Houston Oilers.

The only game he appeared in for the Green Bay Packers was actually the highest rated game of his career, completing 3-of-5 passes for 64 years and a touchdown. I guess you might as well go out with a bang? 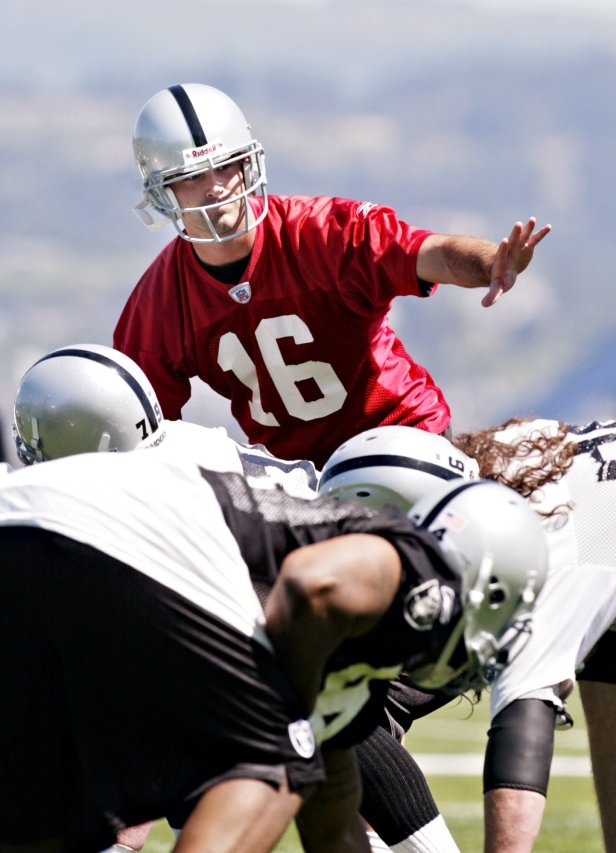 Do you know the song "Lose Yourself" by Eminem? The one that starts:

If you had one shot or one opportunity
To seize everything you ever wanted
In one moment
Would you capture it, or just let it slip?

Well, Andrew Walter let it slip. The former high school All-American and All-Pac 10 quarterback at Arizona State started eight games as a rookie in 2006. He threw 13 interceptions and fumbled the ball 13 times while leading his team to a 2-6 record. Walter was out of football after three seasons. The next year, the Raiders drafted JaMarcus Russell, who you'll be meeting later in this list... 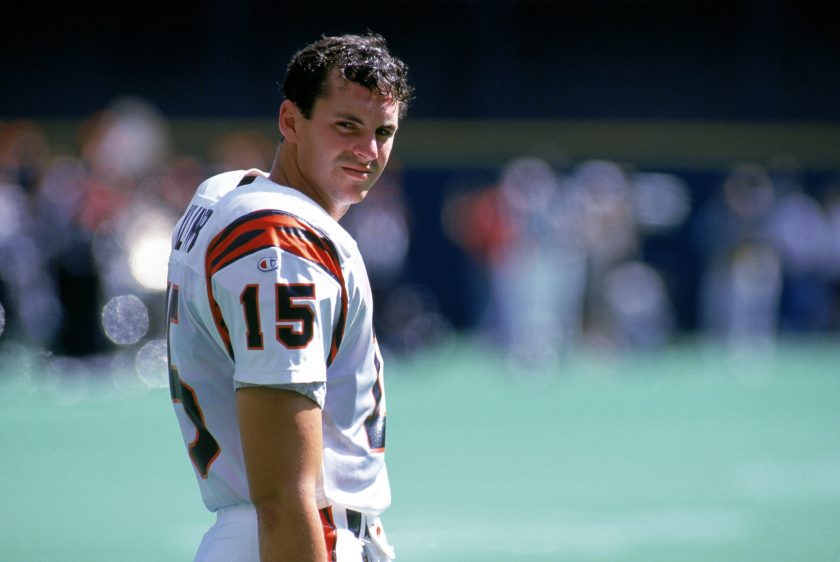 One of college football's most decorated passers, the University of Houston product once threw 11 touchdowns in a game, set the record for most yards in a game (716), and set the single-season record for touchdown passes by throwing 54 in only 11 games.

Sadly, college success didn't translate for Klingler, who was the sixth overall pick in 1992. He played on four horrible Bengals teams, then was sent to where quarterbacks go to die in Oakland. An elbow surgery in 1994 ultimately limited what he could do, and he was out of football by 1998. 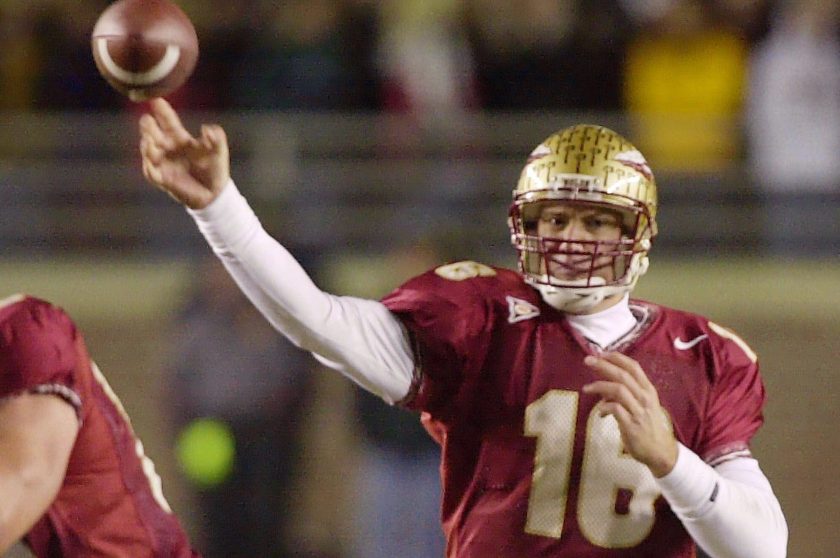 RELATED: The NFL Failed Charlie Ward, And The League Missed a Legend

The oldest Heisman Trophy winner in history -- he was 28 winning it at Florida State -- Weinke actually started his professional career playing baseball for the Toronto Blue Jays, making it up to the Triple-A level before jumping back to football. However, none of that success translated to the NFL for the Seminoles' great.

Weinke won his first start with the Carolina Panthers as a rookie, then managed to lose 17 consecutive games as a starter, including a gap between starts that spanned from 2002-2006. Sometimes, wisdom and age just doesn't help you out. 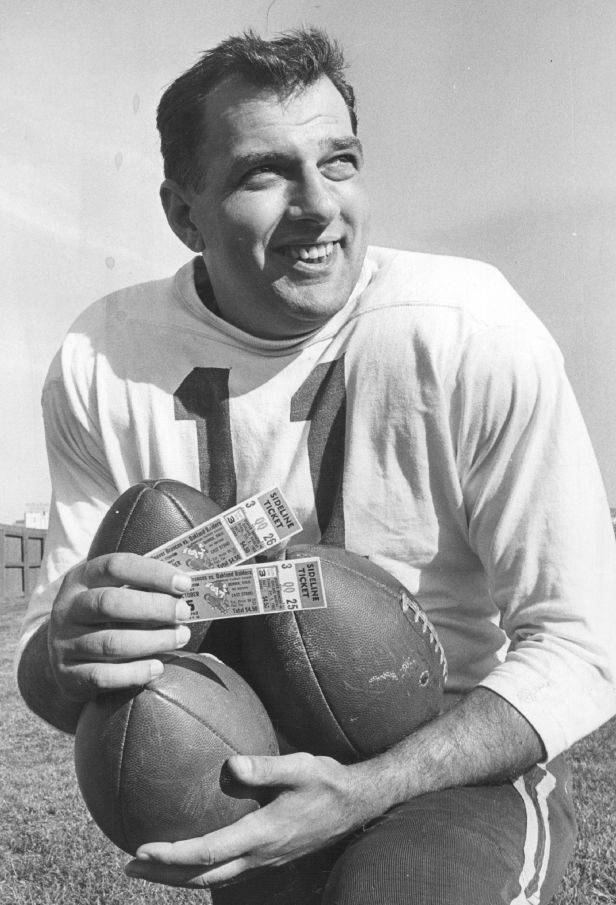 The ninth-overall pick in 1949 has one of the strangest careers in professional football. After throwing 18 touchdowns and 39 interceptions in four seasons with three teams, Tripucka took his talent to Canada and played in the CFL for eight years. Then in 1960, he returned to join the Denver Broncos in the expansion American Football League. That season, he led the league in completions, attempts, yards and threw a Broncos franchise record 34 interceptions (the third most in a season in league history).

He was also somehow named the Pro Bowl in 1962 despite a 6-7 record and throwing 25 more interceptions. Stranger still, his No. 18 jersey was retired in Denver, then un-retired so Peyton Manning could wear it, then it was retired again. 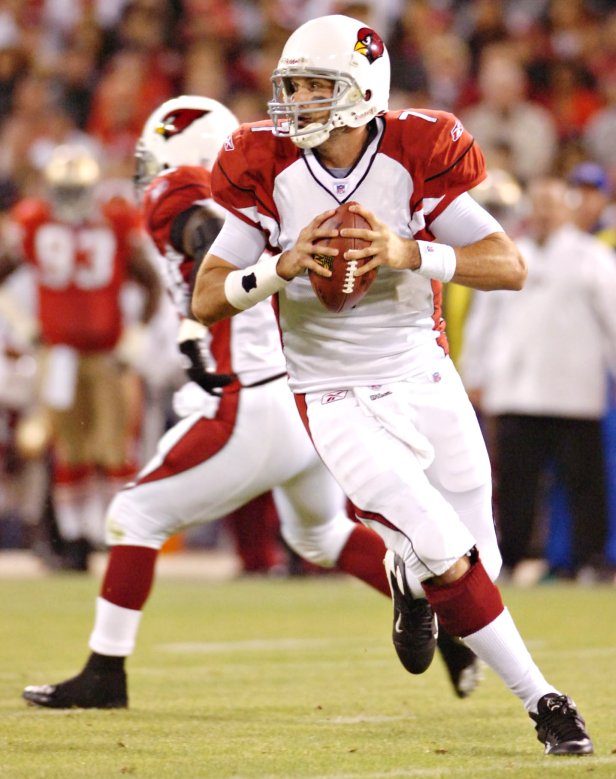 One of college football's greatest passers was the golden boy from California, Matt Leinart. A highly-touted recruit from high school powerhouse Mater Dei, Leinart is more famous for his college achievements at USC and remembered as the glass man in the NFL.

Three season-ending injuries ended the 10th-overall pick's year in an eight-start window, and the southpaw was ultimately was out of football by 2012. To make matters worse, Leinart was brought in for workouts with the Buffalo Bills in 2013. He was beaten out for the job as Buffalo's fourth-string quarterback by Thad Lewis. At least he held out for that six-year, $51 million contract as a rookie, right? 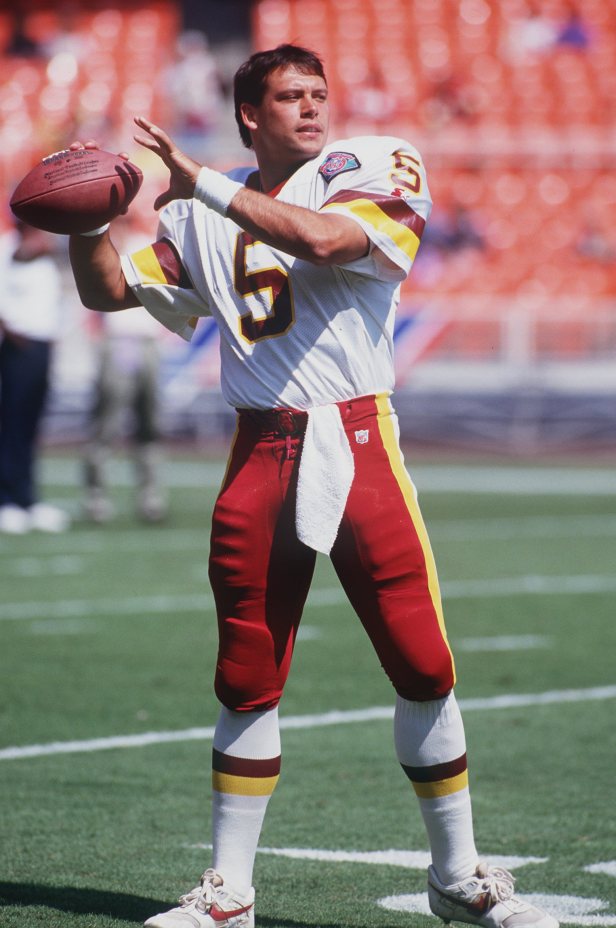 The 1993 SEC Player of the Year coming out of Tennessee, Shuler was heralded as Washington's quarterback of the future when they selected him third overall in 1994 and signed him to a seven-year contract. Well, things didn't go so well for Shuler, as he started his career with a 1-7 record as a rookie and was eventually replaced by seventh-round pick Gus Frerotte after two terrible seasons.

A nagging foot injury forced Shuler out of football after a two-touchdown and 14-interception season playing for the Saints. Football wasn't his calling, but Shuler went on to serve as a member of the House of Representatives for North Carolina's 11 District.

McQuilken wasn't a long tenured quarterback by any means, but what he accomplished across 26 games and seven starts is downright forgetful. The third-round pick from Lehigh University has a career 17.9 passer rating and one of the worst touchdown-to-interception ratios in league history.

He completed 39.7 percent of his passes and threw one pick for every NINE passes he let fly. His NFL career somehow spanned seven seasons before he retired and tried his luck with the Washington Federals in the United States Football League. He threw seven touchdowns and 14 interceptions during their 4-14 season in 1983. 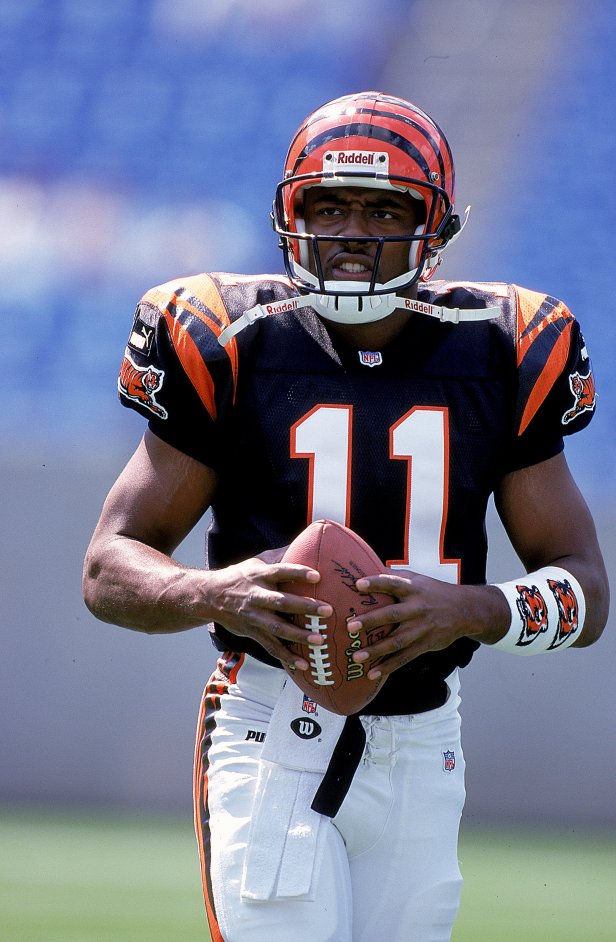 The third-overall pick in 1999 never had the mental fortitude to keep pace with his physical talent. Smith scored a 16 out of 50 on the NFL-administered Wonderlic Test -- a score of 20 is considered a person of average intelligence -- and you need at least a 10 to be considered literate.

Smith's professional football career lasted four seasons in the NFL before he tried his hand with the Frankfurt Galaxy of NFL Europe, and later had stints with several teams in the Canadian Football League. One of the biggest busts in NFL history probably should have stuck with professional baseball. 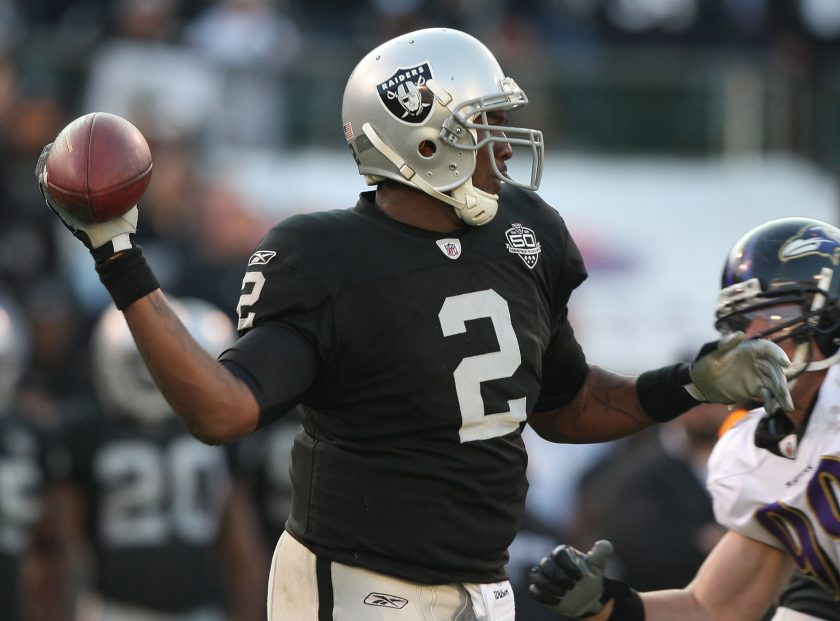 Considering the former LSU Tigers quarterback held out for a $61 million contract with $32 million guaranteed, this is easily the worst quarterback to ever get paid. Russell threw 23 career interceptions and fumbled 25 times over his three professional seasons. Regularly showing up to training camps out of shape and overweight, it was reported that Russell once came to Raiders camp north of 300 pounds. The first-overall pick in 2007 was bounced from the league and attempted a few comebacks, none of which resulted in Russell getting a job in the NFL again. 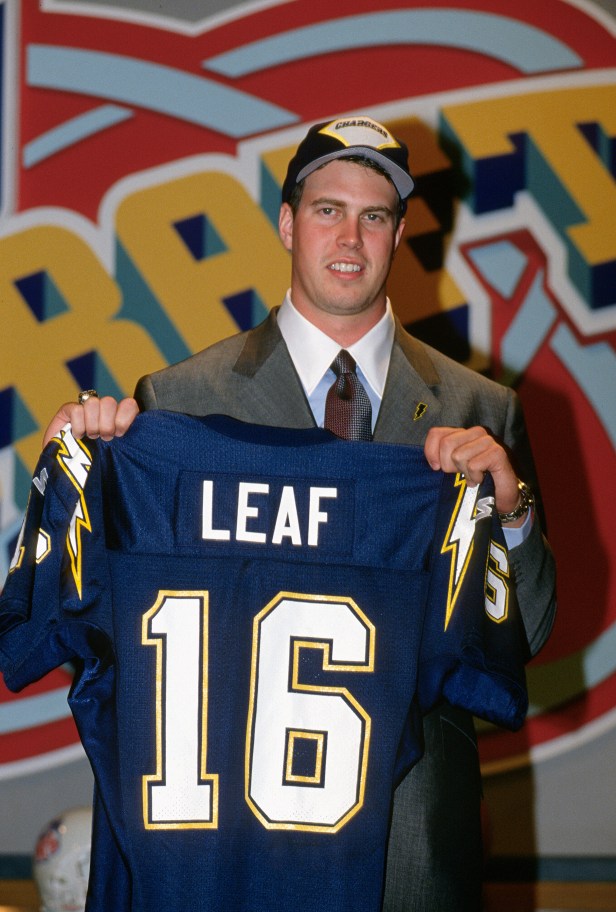 A star at Washington State University, Ryan Leaf ranks as the biggest draft bust in NFL history. That's amplified past our friend JaMarcus Russell, because many people thought it was a toss-up between taking either Leaf or Peyton Manning at No. 1 in the 1998 NFL Draft. Leaf played three horrible seasons for the San Diego Chargers, regularly got into verbal altercations with members of the media and coaching staff and was out of football because of it. Only once in his career did he have a passer rating above 100, and he completed an abysmal 48.8 percent of his passes.

When you're as highly touted and physically gifted as Leaf, and you take your career in that kind of direction? You're the worst quarterback in NFL history.

This article was originally published October 15, 2018, but we're always looking for new terrible quarterbacks to add to add to this list.