Anyone who knows football remembers the name JaMarcus Russell. The former No. 1 overall pick is considered to be one of the biggest busts in NFL history.

Russell will always be remembered for what he didn't do in the NFL, but it may surprise people to hear that not only is he still involved with football, but even attempted to make a comeback on two different occasions. But what is the former Oakland Raider up to now?

As one of the top-rated players in the country and the all-time leader in passing yards for the state of Alabama, quarterback Jamarcus Russell decided to leave Mobile and play his college football career with the LSU Tigers football team as a part of the 2003 signing class.

He got his first playing time as a sophomore in 2004 and played in 36 games over three seasons. He threw for 6,625 passing yards, 52 touchdowns and 21 interceptions. He threw an epic game-winning touchdown in a football game after Hurricane Katrina in 2005. After the 2006 season, when he passed for 3,129 yards and 28 touchdowns against just eight interceptions, he became one of the top prospects headed into the 2007 NFL Draft.

His Sugar Bowl performance in 2006 wowed scouts, earning the game's MVP against Notre Dame. He did the same in his Pro Day at LSU to solidify himself as the top quarterback in college football. 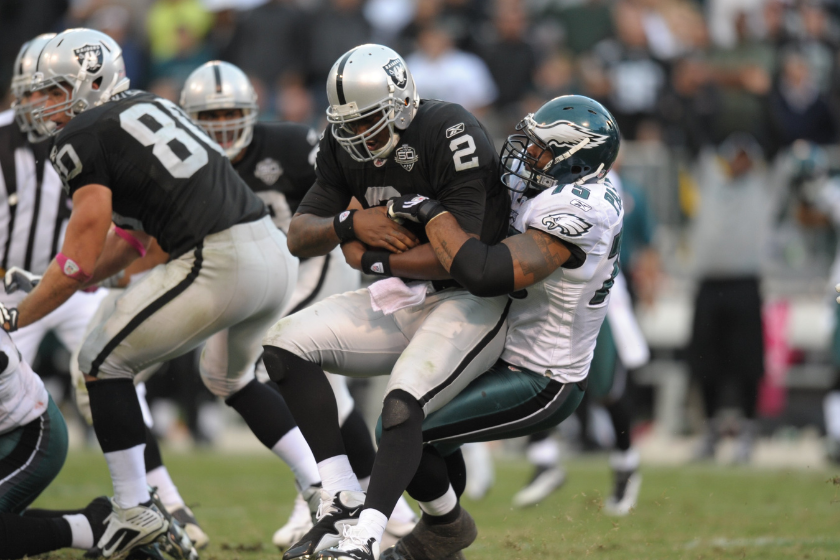 RELATED: Donald Trump Lost Out on $5.5 Billion By Not Buying The Dallas Cowboys

Even though former Oakland Raiders head coach Lane Kiffin was more interested in wide receiver Calvin Johnson out of Georgia Tech, owner Al Davis overruled him to select Russell with the first-overall pick in the 2007 NFL Draft's first round.

Russell's career with the team didn't start well, though, with Russell missing training camp as a rookie due to a holdout over a contract dispute. But the franchise saw that year's first pick as the Oakland Raiders quarterback of the future, and eventually signed him to a six-year deal worth $68 million.

Oakland would have been smart to go with Johnson instead of Russell, and it wouldn't take them long to figure that out. In three NFL seasons with Oakland, Russell appeared in just 31 games and was the starting quarterback for just 25 of those, winning only seven games. He passed for 4,083 yards, 18 touchdowns and 23 interceptions.

His career passer rating was a horrendous 65.2 and his QBR, which is a score out of 100, only reached as high as 32.5 and dropped to 19.5 after his third season. His completion percentage was awful as well, completing just 52.1 percent of his throws throughout his career.

He also had issues off the field. One of the biggest stories to come out of his career was when he was given game film to watch at home from the Oakland (now Las Vegas) Raiders. The film was a test from his Raiders coaches to see what he thought. Russell returned the following day claiming to have watched it, not realizing the tapes were completely blank.

During the JaMarcus Russell days, Raiders coaches didn?t believe he was watching film.

So they gave him blank tapes.

The next day, he came in saying he watched ?blitz packages.?

Again, they were BLANK.

His work ethic was continuously questioned due to his weight and inability to learn the NFL game, and those questions seemed to be his true downfall since he had all of the physical tools to be a successful quarterback, including his incredible arm strength.

His final game came against the Baltimore Ravens in 2010, but during the offseason, the team traded for Jason Campbell from the Washington Redskins and released Russell shortly after. He hasn't been signed by a team since, not even by the Bears or Browns.

Incredibly, he made a whopping $39 million during his three-year pro career.

Where Is JaMarcus Russell Now?

JaMarcus Russell came in to check on the Tigers. #ForeverLSU pic.twitter.com/16zLmtgIMA

JaMarcus Russell is here at Texas A&M. He played for Jimbo Fisher pic.twitter.com/T9I2NkgWcK

Even though he has attempted to make multiple NFL returns in 2013 and 2016, the 35-year-old Russell didn't have any luck. He once said in an interview that he would even return to an NFL team if it meant playing for free.

Russell ultimately gave up on his NFL quarterback comeback, but he's not out of football. Since 2018, Russell has spent the last years as the quarterbacks coach at Williamson High School, his alma mater in Alabama. Perhaps one of the football players to roll through Williamson can reach the same heights as Russell and be a No. 1 pick.

This guy, former Williamson QB and now assistant coach JaMarcus Russell, has received a lot of nominations for the Mt. Rushmore of Alabama HS football. Have you made your nomination? #alpreps #foleyshowdownhttps://t.co/7BncPWWSrV pic.twitter.com/9bwNMaqJUH

The former No. 1 draft pick's professional career as an NFL player may have never panned out, but Alabama's all-time passing yards leader is at least teaching the next generation of football talent the right way to play the game he loves.

This post was originally published on July 27, 2019, but has been updated.