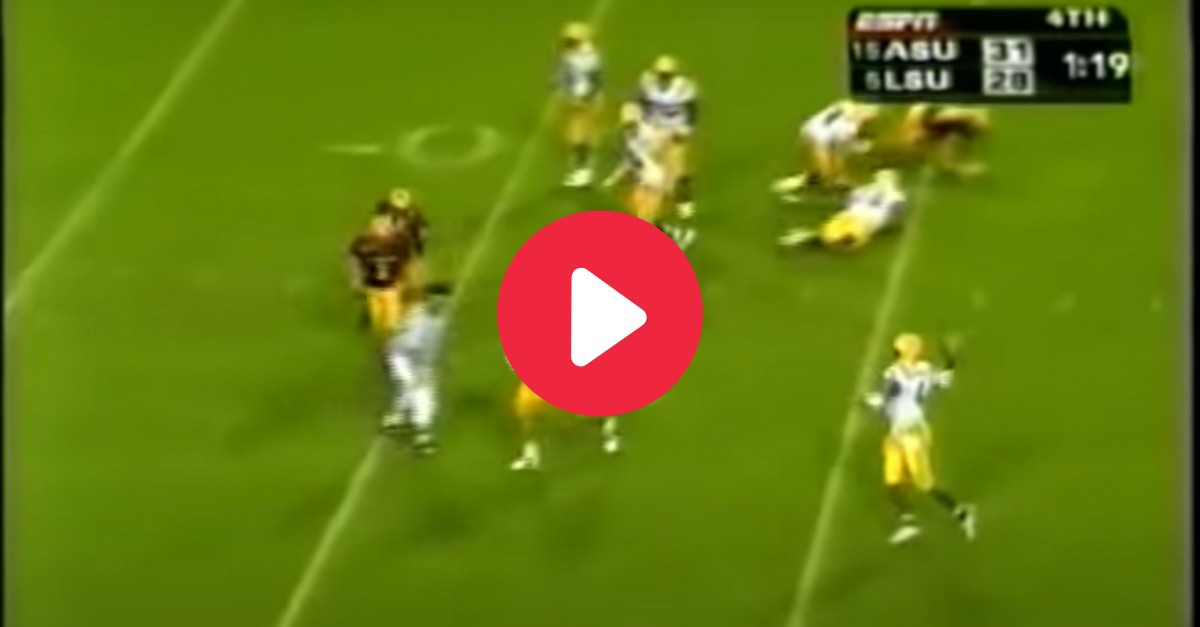 Fifteen years before Joe Burrow treated the college football world to his “Heisman moment”, another LSU Tigers quarterback cemented himself as the NCAA’s next great signal caller. Some call JaMarcus Russell the most talented college quarterback of all time. Some call the mobile, cannon-armed passer an all-time NFL bust.

When Hurricane Katrina hit the state of Louisiana in August 2005 and destroyed homes and displaced people from New Orleans to Baton Rouge, LSU fans needed a distraction. From the destruction. From the death. Russell provided that instantly in 2005.

Louisiana State University was originally supposed to play its season opener against No. 15 Arizona State at home. That quickly changed when the school opened campus up to hurricane victims. The NCAA then moved the game to Sun Devil Stadium in Tempe, Arizona.

This wasn’t any old season opener.

This was Les Miles’ first game as the Tigers head coach, and he was replacing a man who won 48 games in five seasons, including the 2003 national championship: Nick Saban.

In less than five minutes into The Mad Hatter‘s first game in Baton Rouge, he reached into his bag of special teams tricks. He called a fake punt with punter Chris Jackson and it worked to perfection, but it didn’t lead to points.

LSU found itself down 17-7 by the time the fourth quarter rolled around, a bleak sign for what could possibly be a very long season.

Then, things began to change. LSU’s Claude Wroten blocked an ASU field goal attempt and Mario Stevenson returned it for a touchdown. The Tigers nearly fell down by 13, but now they were within three. Almost immediately after, they blocked a Sun Devils punt and LSU cornerback Craig Steltz returned that for another score, giving LSU the 21-17 lead.

The rest of the quarter was a back-and-forth affair. ASU quarterback Sam Keller threw a touchdown, LSU’s Skyler Green and Joseph Addai teamed up to march the LSU offense downfield and score again. Down 31-28 with a few minutes to go, JaMarcus Russell was tasked with driving the length of the field and either winning the game or tying it up.

What do you think he did?

LSU’s offense began to stall on Arizona State’s 39-yard line. On fourth-and-10, Russell made not only the play of the game, but arguably the play of his collegiate career.

The 6-foot-6 Russell scrambled a bit before uncorking a throw off one foot. LSU wide receiver Early Doucet came down with it in the end zone just before falling out of bounds to complete the comeback. Whether Doucet had control of the ball all the way through the play is up to you, but referees ruled it a touchdown.

?I was thinking to myself, God put us in this position,? Russell told the New York Times. ?He got us this far and we just had to put a little extra hard work in.?

LSU needed one more stop on defense to put the game away, and it did.

Jimbo Fisher, then the LSU offensive coordinator, reflected on the play.

?It was such a big moment for everyone,? Fisher told the New York Times. ?It was the kind of moment that makes legends.?

The thrilling win, at least momentarily, lifted Louisianans’ spirits and paved the way for an 11-2 mark in Miles’ first season. LSU lost the SEC Championship game to the Georgia Bulldogs but defeated the Miami Hurricanes in the Peach Bowl, finishing No. 6 in the Associated Press final poll.

Russell would go on to have many terrific moments and games in Baton Rouge — like when he torched Notre Dame in the 2007 Sugar Bowl — before the Oakland Raiders selected him first overall in the 2007 NFL Draft. The Mobile, Alabama, native’s professional career may not have panned out the way LSU fans hoped, but they won’t ever forget his game-winning touchdown after Hurricane Katrina.

This post was originally published on May 19, 2020, but this moment deserves to be brought back to light.