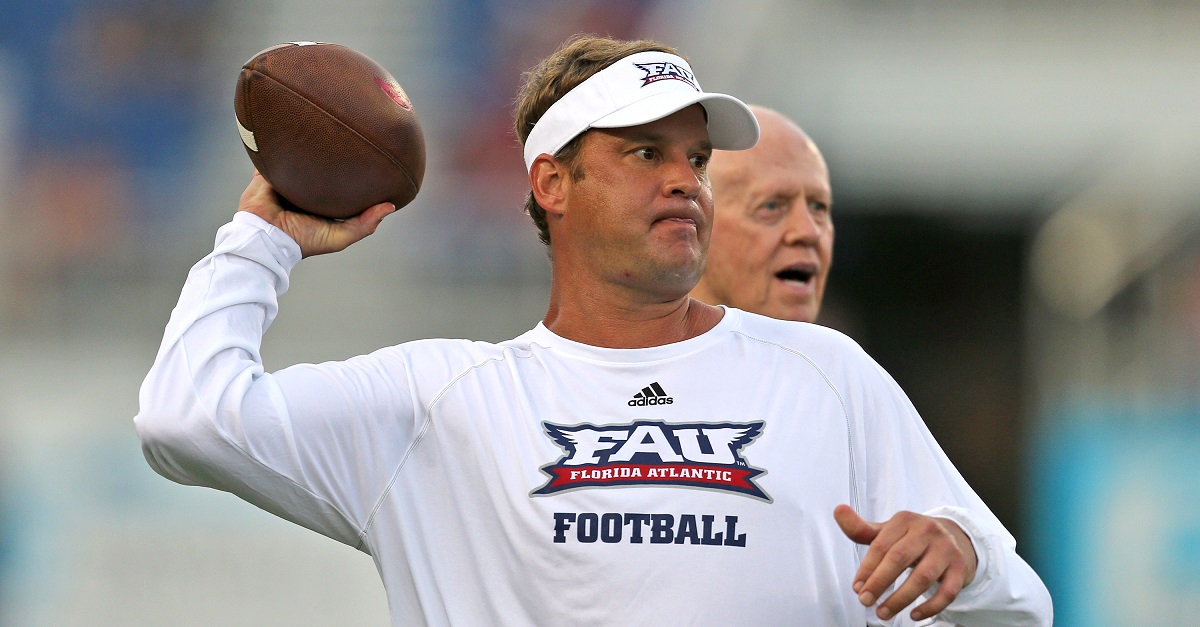 Florida Atlantic head coach Lane Kiffin has never been one to hold back his opinions on certain subjects, especially when it comes to the college football world. The former Alabama assistant has been very outspoken on things like quarterback Jalen Hurts, and he’s also made sure to poke fun at his former boss, Nick Saban.

This offseason, Kiffin addressed the NCAA Transfer Portal, which college football players are entering more and more in hopes of starting fresh at a new school. But what he said makes him look like a hypocrite for what he’s done in the past.

After former Alabama quarterback Jalen Hurts landed in Oklahoma, Kiffin tweeted, “Glad to see u being u again @JalenHurts smiling and enjoying life!” Not exactly a subtle jab at Hurts being benched and, as a result, unhappy his final season at Alabama, huh?

Kiffin has taken subtle jabs at Nick Saban in the past, too, but he’s said he has nothing but respect for his former boss. Kiffin even defended Saban when allegations of cheating came out last year.

coach Nick Saban: “I don’t yell at my assistants very much at all…” Are these real quotes? I don't get upset at my coaches much??🤥 We tell our players to control their emotions during the game bc when emotions go up decision making goes down but…. RTR https://t.co/EurFYX2hzw

He took to Twitter again with these comments after he appeared on the Colin Cowherd Show to talk about allegations that Saban cheats to get top-ranked recruiting classes.

“The best coach in the history of college football ever!! How can u say he’s overrated??? Coaches just hate on him bc he beats them on the field and out recruits them off the field!!”

Yep, Kiffin rarely holds back his opinions, but maybe this time he should have kept his mouth shut when it came to discussing the NCAA Transfer Portal rule. It certainly seems as if Kiffin is not a fan of this policy at all.

Kiffin said to the Palm Beach Post that the NCAA Portal rule is just a ?sexy thing to do.?

“I can get in this portal so I can get some attention ? we’re in a generation of just wanting attention no matter what ? so now, I can go in this (portal), get an article written about me, and get re-recruited because I don’t like exactly how something’s going.”

Excuse me? Did anyone else laugh when they saw comment?

The king of attention getting is talking about kids leaving their old schools for attention. Didn?t Kiffin do that when he left Tennessee in the middle of the night to join USC?

Or doesn?t Kiffin do that every time he opens his mouth about Alabama? Lane Kiffin has a right to his opinion, but he just looks like a hypocrite here. These kids have a right to transfer to another school if they are unhappy with their situation, just like Kiffin had every right to leave the places he has left high and dry in the past to pursue better opportunities.

But in this case, Lane Kiffin should literally stay in his lane when it comes to discussing the NCAA Transfer Portal.