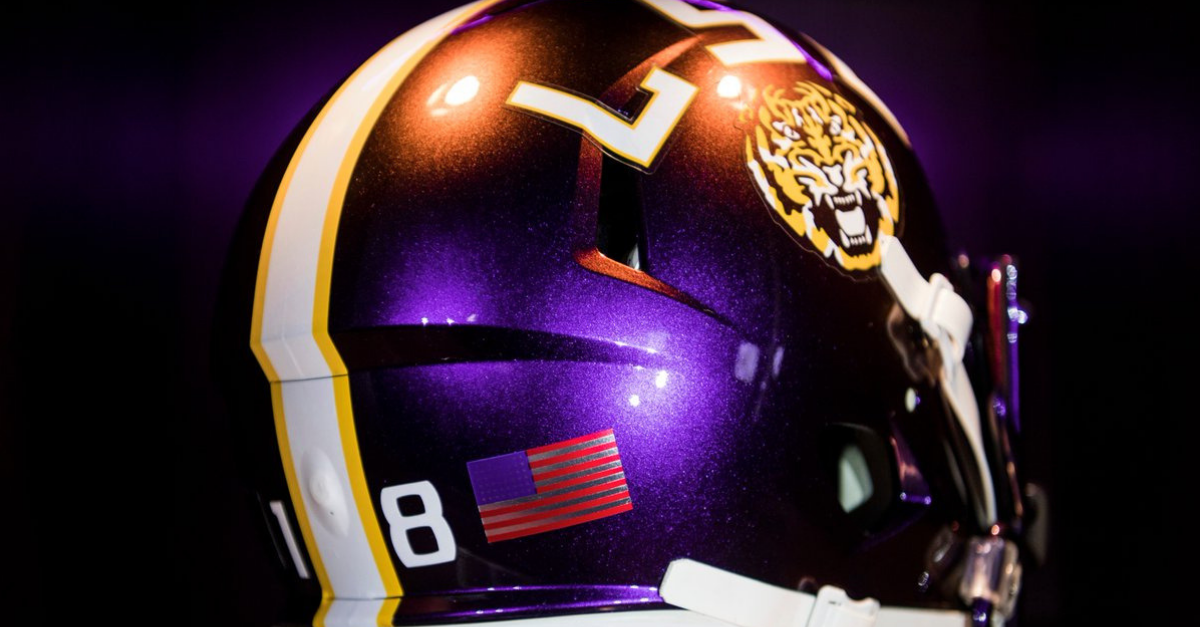 Aside from rivalry weekends, there is no game on a college football schedule quite like homecoming. It’s a time when alumni from across the country flock back to their alma mater to meet up with old pals, see what’s new on campus, and take in a college football game live in living color.

At Louisiana State University and the University of Missouri, both schools are setting up homecoming celebrations this weekend that call for a little something extra. Both football programs unveiled alternate uniforms for the occasion complete with helmets that are sure do more than just protect player’s head under the lights.

In a major SEC night game, the No. 5 LSU Tigers will host the No. 22 Mississippi State Bulldogs under the lights at Tiger Stadium.

When head coach Ed Orgeron’s team rolls onto the field, they’ll be wearing these insane two-toned, color-changing helmets that will shine purple in one light, but reflect gold when the stadium lights hit them just right.

Will be even better under the bright lights of Tiger Stadium… pic.twitter.com/8ppvEkmOrP

These sweet helmets and all-white jerseys are more than just a slight change for homecoming, though. The jerseys are honoring the “Silent Season” of 1918, when the LSU Tigers did not field a team because of the troops fighting in World War I.

The jerseys will not have nameplates, in remembrance of unknown soldiers who did not return home to Baton Rouge following that lost season. In addition, there are oak leaf patterns found across the jersey, which signify the oak trees surround LSU’s campus memorial of “The Unknown.” Completing the design is the bolded 1918 year on the back of every chrome helmet.

These are more than just show-stopping alternates. They’re a tribute to something greater than football in an awesome display of patriotism that’ll be showcased Saturday night.

It's more than a uniform.

We honor the 30 men, including Lawrence Brogan and James Hall who were football letter winners at @LSU before making the ultimate sacrifice in World War I. https://t.co/GkuKhiTe0d pic.twitter.com/4doh94KoU8

RELATED: Does the Worst SEC Uniform Belong to Your Team?

After rocking gold football helmets in their game against Alabama last week, Missouri (3-3) returns home to take on the Memphis Tigers (4-3) of the American Athletic Conference on homecoming in Columbia.

The Tigers used to wear the “Block M” on their helmets for decades before switching to the Tigers logo they wear today, but the addition of the rock texture and bold triple center stripe gives these a sweet added touch.

It’s a homecoming tradition to bring back this design, and when Missouri hits the field against Memphis, they’ll be doing so in grand style looking for win number four on the year.

With thy watchwords, Honor, Duty,
Thy high fame shall last.#MIZ #ShowMe 🐯🏈 pic.twitter.com/EDdLZG5ydl

College football is built on tradition, but sometimes bringing some new school style for the alumni returning home makes the games feel a little bit different.

They say “if you look good, you play good,” and Mizzou and LSU will definitely put that to the test this weekend.

READ MORE: LSU’s Student Chant is Not Safe For Work or From Tiger AD’s Temper