There are some guys who you can throw on any playing surface and they'll be successful.

Jared Mitchell is one of those guys. Mitchell was a wide receiver on the LSU football team and an outfielder on the LSU baseball team.

He won national titles as a member of both squads.

It wasn't a bad time to be on campus in Baton Rouge from 2007-09. More than a decade later, the dual success in the fall and spring is still alive.

It's important to pay tribute to the great ones like Mitchell who did both. That being said, what is Jared Mitchell doing these days? 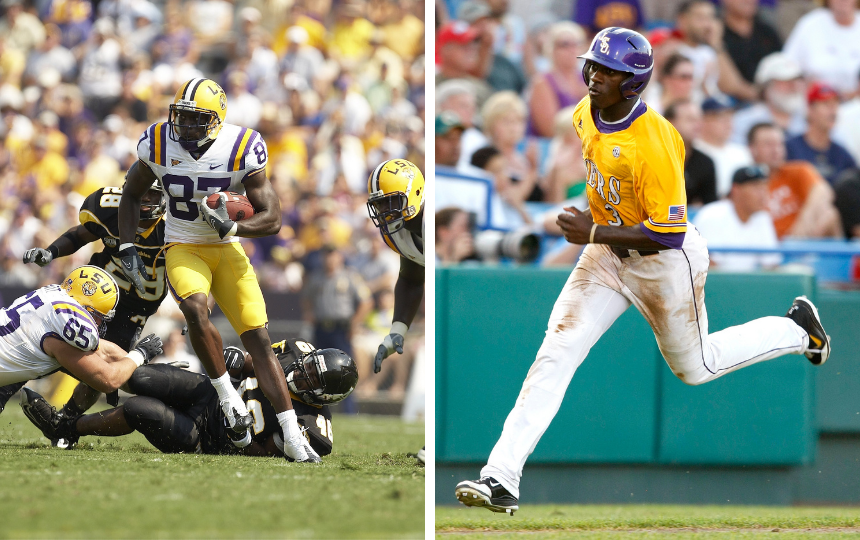 Mitchell was selected by the Minnesota Twins in the 10th round of the 2006 Major League Baseball Draft out of Westgate High School. The New Iberia, Louisiana native passed on the pros to play college football and baseball at LSU.

Under football head coach Les Miles, Mitchell was a pass-catcher. In three seasons, Mitchell caught 24 passes for 274 yards. He was also used as a punt returner during his sophomore season. That same year, LSU defeated Ohio State to win the 2008 BCS National Championship.

Mitchell also thrived as an outfielder on Paul Mainieri's LSU Tigers baseball team. The Bayou Bengals reached the College World Series in Omaha in Mitchell's sophomore and junior seasons. He particularly shined in the 2009 CWS.

Jared Mitchell and Chad Jones are the only two players in history to win a BCS national title and College World Series championship! pic.twitter.com/2lVfKmnzTr

The Tigers powered through the field and took down Texas in three games to capture the 2009 NCAA National Championship. Mitchell recorded a .348 batting average with a triple, two doubles, two home runs and seven RBIs in 23 at-bats in Omaha. He was more than solid with his glove, too, and won the 2009 CWS Most Outstanding Player Award.

The Chicago White Sox selected the LSU baseball player with the 23rd pick of the first round in the 2009 MLB Draft, two picks higher than Mike Trout.

Mitchell played for the Kannapolis Intimidators, Single-A Winston-Salem Dash, Double-A Birmingham Barons and Triple-A Charlotte Knights of Chicago's minor league system. An ankle tendon tear in his second season hindered his professional progress. He was released by the White Sox after five seasons.

He moved around to the Los Angeles Angels and New York Yankees, where he played for the Double-A Trenton Thunder, but he never made it to the big leagues. It looked like the outfield star was poised to make a comeback with the Cincinnati Reds after displaying his skills as a hitter in 2018. However, he was cut near the end of spring training and became a free agent.

Since then, he's played with the York Revolution, Sugar Land Skeeters and High Point Rockers of the Atlantic League of Professional Baseball.

The 2009 CWS Most Outstanding Player most recently played for the High Point Rockers of the Atlantic League of Professional Baseball.

He played for the Rockets in 2019 and resigned in 2020 before the coronavirus pandemic forced the league to cancel the season. He played for the Eastern Reyes del Tigre of the Constellation Energy League, a four-team league created as a result of COVID-19, in 2020.

The 33-year-old became a free agent at at the end of the 2021 season and appears to be enjoying his down time time with his family.

LSU fans will always hold a special place for the player who helped lead the baseball program to its sixth national title.