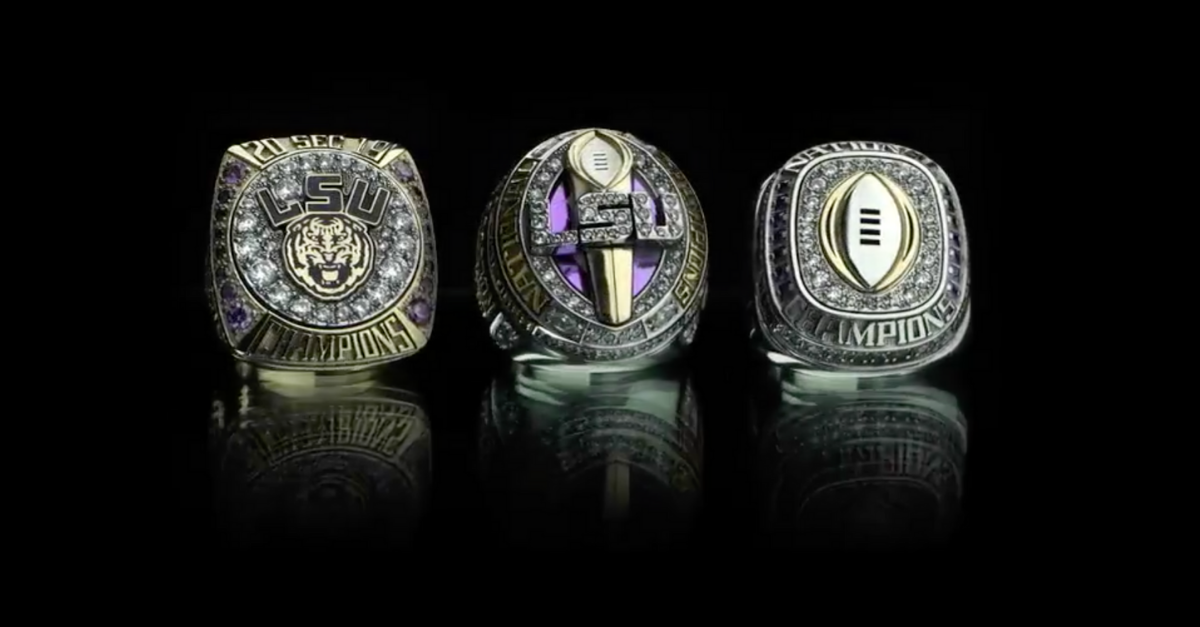 Before the clock ran out and the confetti started to fall, the LSU Tigers were preparing for the moment. They had already been fitted for a ring and were so confident the national championship trophy was going home to Baton Rouge. And that?s exactly what happened.

On January 13, 2020, LSU football took down Clemson Tigers to win the College Football Playoff in New Orleans. The Tigers finished the season a perfect 15-0 and many have already labeled them as one of the greatest teams of all time.

Quarterback Joe Burrow won the Heisman Trophy and set numerous NCAA and SEC records. The offense was flooded with talent. The defense had playmakers all over. There were no flaws. LSU head coach Ed Orgeron truly had a football team for the ages and now they all have multiple championship rings to show off.

Rings Fit For The Best Ever

One Team. One Heartbeat. pic.twitter.com/LoCDyA7m7U

To say Louisiana State University was ready for this unveiling would be an understatement. Derek Ponamsky, the special assistant to Coach O, assistant athletics director for equipment Greg Stringfellow and director of equipment Louis Bourgeois worked together on the design.

“We wanted to make sure that we included his thoughts,” Ponamsky said, “which all along were, ‘I want a badass ring.?”

Well, Coach O, you don?t have just one ring. You have three.

And as the social media caption puts it, they are ?Rings Fit For The Best Ever.?

Every single feature on the three rings was carefully thought of and executed. They are one-of-a-kind rings and bling you won?t find anywhere else.

The 2019 Championship Ring features 16 round cut purple stones representing LSU?s conference titles and the helmet logo on the front. One side has the team mantra ?One Team. One Heartbeat? along with the recipient?s last name, helmet and position or title. The other side features ?Geaux Tigers?, the SEC Championship Game final score and the SEC Championship trophy. The inside of the ring also features the scores of each SEC game, including Alabama, Auburn, and the conference championship game against Georgia.

The 2019 College Football Playoff Ring has purple stones and the CFP logo on the face, and the results from all postseason games on inside, including Georgia, Oklahoma and Clemson. One side features the conference championship recognition, and the other has the recipient?s last name, perfect season record and the championship game logo.

The 2019 National Championship Ring is obviously the crown jewel of the trio and different than any other ring made, even for the NFL?s Super Bowl champions.

“The rings we ended up with this time look like no ring that’s ever been done,” Greg Stringfellow said. “The national championship ring is the first time they’ve done a ring that shape and size in their history.?

With white-gold LSU stones on the yellow-gold rendering of the championship trophy, the ring features all three school colors: purple, gold, and white. It has 16 round cut stones, and four marquise cut stones for LSU?s four national titles. The inside of the ring features a ?Geaux Interlock? to represent the team?s togetherness and the ?LSU Standard of Performance.?

One side of the ring has the team mantra, the championship season, Geaux Tigers and Tiger Stadium. The other side has the LSU fight song, recipient?s last name, Louisiana logo, perfect season record and the position or title.

In all, there are three rings fit for the college football kings, and they are beautiful.

MORE: LSU?s 2020 Schedule Sets Tigers Up for Another Title Run