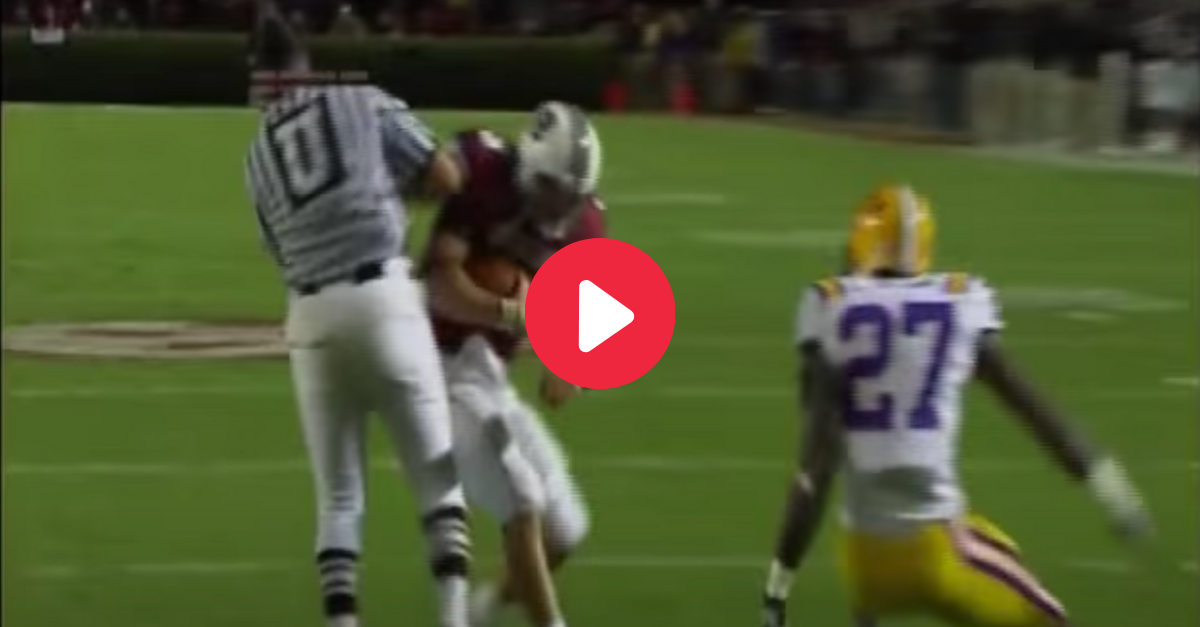 For better and for worse, a referee is always in the middle of the action. No matter the sport, it?s their job to be right there in order to make the proper calls. They generally stay out of harm?s way and aren?t usually involved in plays, but there are certainly some exceptions.

Perhaps no moment of referee interference is as famous as when the LSU Tigers hosted the South Carolina Gamecocks at Tiger Stadium back in 2008. It?s when the college football world was introduced (or reintroduced) to umpire Wilbur Hackett Jr.

Hackett, a former linebacker for the Kentucky Wildcats from 1967-70 and the SEC?s first African-American captain in any sport, was working that night in Baton Rouge when he gave Gamecocks quarterback Stephen Garcia a forearm shiver for the ages.

Late in the second quarter, head coach Steve Spurrier?s South Carolina team was rolling all over LSU. Carlos Thomas had just picked off Tigers quarterback Jarrett Lee and returned it 46 yards to give the Gamecocks another just to score just before halftime.

On the first play, with just over two minutes remaining in the second quarter, USC?s Stephen Garcia took the quarterback keeper, bounced out to the left and was looking to find the end zone. However, he was met by the forearm of umpire Wilbur Hackett Jr. before LSU defenders swarmed him to complete the tackle.

At first, it was hard to believe that a ref had just extended his forearm and laid out a quarterback, but that?s exactly what happened. Of course, some fans believe Hackett did it on purpose, but Southeastern Conference officials said he didn?t do anything wrong.

Spurrier didn?t think so, either. Neither did LSU head coach Les Miles, who even made fun of the situation.

Depending on who you ask, the play on ESPN was either hilarious or frustrating, but it didn?t stop the inevitable from happening. USC running back Mike Davis scored a touchdown, the Gamecocks took a commanding halftime lead, and LSU came back to win the game, 24-17.

Football players run into umpires more often than you think. Even LSU quarterback Joe Burrow did it on a run against Ole Miss during the 2019 college football season, which saw head coach Ed Orgeron and the Tigers win the College Football Playoff National Championship Game over Clemson.

Nothing quite compares to Wilbur Hackett Jr.?s forearm against Stephen Garcia, though. That moment was legendary.

MORE: NFL Ref Asked Steve Young to Date His Daughter? During a Game