It's been a wild NCAA college football Saturday in the SEC. We've already witnessed the No. 14 ranked Ole Miss Rebels upset the No. 7 ranked Kentucky Wildcats. Now we've got the Big 12's No. 17 Aggies of Texas A&M falling to the unranked Mississippi State Bulldogs.

The SEC's big dogs have been as advertised so far this season. Georgia and Alabama appear set to meet up with Ohio State and another mystery school in the college football playoff, but the rest of the SEC has been one dogfight. Auburn, Texas A&M, Florida and LSU are all battling in the basement, but today, Mississippi State took that battle into the spotlight.

This is the kind of wild game Texas and Oklahoma can look forward to. 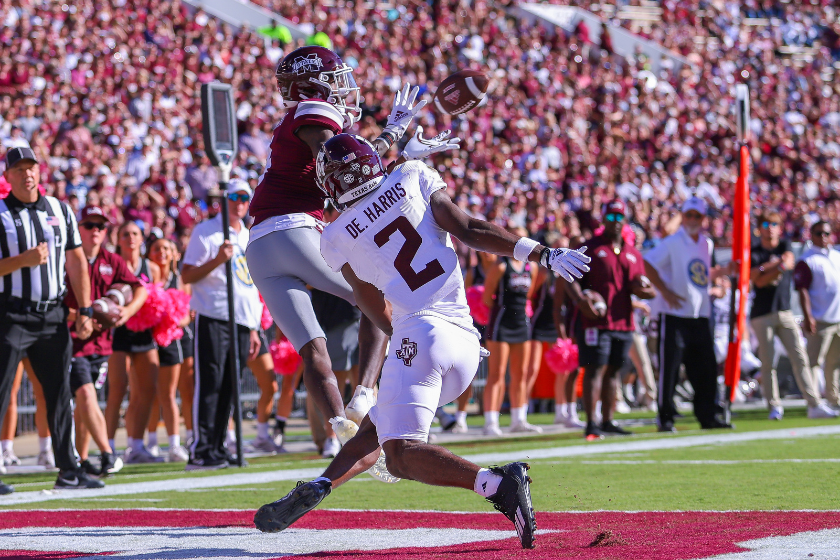 MSU head coach Mike Leach came into today's matchup at the bottom of the SEC West. They're 3-1 overall but 0-1 in conference play, having lost to the LSU Tigers back on September 17th. Aside from that, their offense has put up big numbers against its other opponents so far this season. They defeated Memphis 49-23, walloped Arizona 39-17, and blew out Bowling Green 45-14 last week. Quarterback Will Rogers III has thrown for 16 touchdowns and almost 1,400 yards so far this season, as he quietly continues becoming an all-time SEC record holder. Jimbo Fisher's Aggies enter the matchup on the heels of back-to-back victories over Arkansas and Miami.

The first quarter ended without either team putting points on the board. In the second quarter, MSU put up 14 points via two touchdown passes from Will Rogers. One went to wide receiver Caleb Ducking, while Rufus Harvey grabbed the other. That was the score as the teams headed to the locker rooms at halftime. While the first half was relatively tame, especially on the scoreboard, the second half would prove to be quite the opposite. The Aggies would take the second-half kickoff and put together a 14-play, 72-yard drive taking over 6 minutes of the third quarter. They only managed to come away with a field goal.

The Aggies defense came up with a fumble recovery on MSU's next drive, and put themselves in prime position to close the gap, taking over on the Bulldogs 25-yard line. Quarterback Max Johnson was unable to string enough plays together to get anywhere, and some costly penalties caused the drive to stall. With just over five minutes left in the third quarter, they lined up for a 44-yard field goal attempt. Kicker Randy Bond was hoping to smash it through the uprights to bring the Aggies to within one score. Instead, this happened:

MISSISSIPPI STATE BLOCKS THE FIELD GOAL AND RETURNS IT FOR A TOUCHDOWN!!! pic.twitter.com/s5Ux2ReOod

Cornerback Emmanuel Forbes came around the corner and blocked the kick. It was picked up by teammate Decamerion Richardson and returned for a touchdown. Rather than 14-6, Mississippi State opened their lead up to 21-3 late in the third quarter. The blocked field goal put the momentum firmly on the MSU sideline. Texas A&M managed to put a few points up afterward, but the Bulldogs answered each time, and then some. MSU dominated in the fourth quarter, putting the game out of reach. The final score was 42-21. Yet another upset in the SEC.

The Aggies will look to bounce back from this loss when they travel to face Alabama next weekend. But without Ainias Smith, the offense led by Max Johnson can't rely solely on running back Devon Achane. Jimbo Fisher needs answers, quick. If he can't find them, the Aggies will once again be ping-ponging in and out of the top 25 rankings.

Mississippi State will welcome Arkansas to Davis Wade Stadium at Scott Field, hoping to keep the momentum rolling after their latest SEC upset.

MORE: Ole Miss and Lane Kiffin Hang On to Upset the Kentucky Wildcats at Home in Oxford