It was one of the more anticipated matchups in college football this weekend, as the Kentucky Wildcats headed to Oxford, Mississippi, for a regular season showdown with the Ole Miss Rebels on ESPN.

The programs sit seventh and 14th in the rankings, respectively. Both teams came into the matchup undefeated and looking to make a statement in the SEC. Ole Miss is coming off a 35-27 victory over the Tulsa Golden Hurricane in their game last week, while the Wildcats knocked off the Huskies of Northern Illinois by a 31-23 score. But the win that put the Wildcats on the map was their upset victory against Florida, as Kentucky's defense kept Anthony Richardson in check.

Sportsbooks had Kentucky as a 6.5-point underdog heading into the matchup, with the over/under sitting at 55. A sold-out crowd of just over 64,000 at Vaught-Hemingway Stadium was treated to a thrilling back-and-forth football game that came down to the wire and featured a thrilling final few minutes. 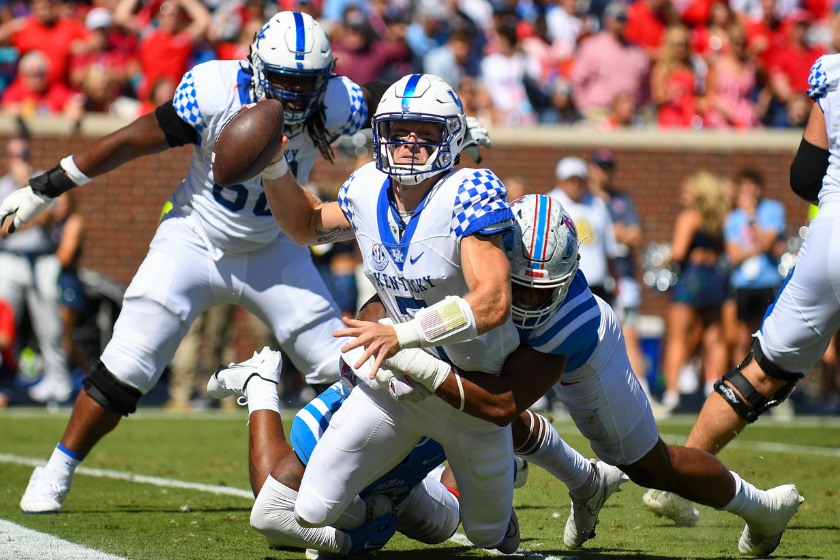 The two teams swapped possessions to open the game before Ole Miss found the end zone on its second drive to open the scoring. Former USC quarterback Jaxson Dart led the offense down the field on a 6 play, 65-yard drive that was capped off by a 4-yard touchdown run from Zach Evans. Mark Stoops' Kentucky Wildcats, led by quarterback Will Levis, welcomed back running back Chris Rodriguez, who had been suspended so far this season. They took the ensuing drive down to the Ole Miss 21-yard line before stalling out and setting up for a 39-yard field goal attempt, which kicker Matt Ruffolo missed.

Ole Miss immediately capitalized when running back Quinshon Judkins snapped off a 48-yard touchdown to put the Rebels up by 14, showing the world that Ole Miss' run game is for real. Kentucky would finally get on the board after an 85-yard kickoff return by Barion Brown set the offense up deep in Rebels territory. Two plays later, Chris Rodriguez would punch it in from 10 yards out. The extra point attempt was blocked by Ole Miss, making the score 14-6 as the first quarter came to a close.

The Rebels would extend their lead thanks to a safety and a field goal in the second quarter before Will Levis capped off a 70-yard drive with a 5-yard completion to wide receiver Tayvion Robinson. The Wildcats would go for two, but the attempt failed. Ole Miss would take a 19-12 lead into the locker room at halftime. The cats would add a touchdown in the third quarter, while Lane Kiffin's Rebels could only manage a field goal, closing the deficit to three points as the fourth quarter began.

Wildcats Fight Back, Come Up Short 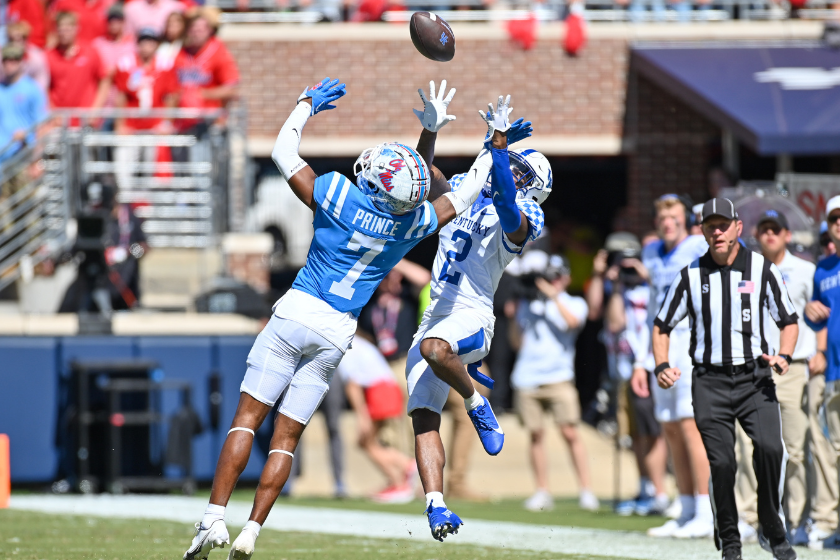 It would be a fourth quarter that quarterback Will Levis will likely want to forget. After getting the ball on downs near their own end zone, Levis would lead an 11-play drive that lasted over seven minutes and made it to the Ole Miss 19-yard line with just under three minutes remaining. On third down, Rebels linebacker Austin Keys forced a Levis fumble that was recovered by teammate AJ Finley, stopping the drive in its tracks. After the cats defense held Ole Miss to a quick three-and-out, they would get the ball back at their own 34-yard line with under two minutes remaining. Levis looked to have redeemed himself after completing a 51-yard pass to wide receiver Barion Brown that took the Wildcats to the Ole Miss 8-yard line with a chance to complete the comeback victory.

Unfortunately for Levis and Kentucky, the future NFL Draft pick would be sacked by defensive end Jared Ivey while dropping back to pass. A shift in personnel on Kentucky's offensive line allowed Ivey to knock the ball from Levis' hand as teammate Tavius Robinson dashed any hope of a victory for the Wildcats, cementing the upset victory for Lane Kiffin's Rebels.

Y?all! What a defensive play on the forced fumble by Jared Ivey and the recovery by @Taviusrobinson!! Literally game-changing as the Rebels beat No. 7 Kentucky, 22-19! #PartyInTheSip pic.twitter.com/xLnfdRfJqc

Depending on the outcome of the battle between Alabama and Arkansas, the Rebels may find themselves alone atop the SEC West. At 4-1, Kentucky football is proving that they are for real this season and will be a tough opponent in the SEC East. The real important question is how far back in the AP Top 25 will Kentucky fall? Tennessee looks like a lock to move into the No. 7 spot, as Lexington's favorite football team looks to drop back to the late teens with Texas A&M.