Before Alabama Crimson Tide head coach Nick Saban won any national championships or SEC championships at LSU and Alabama, he played defensive back at Kent State University. A young Saban even helped the Golden Flashes win the MAC Conference for the first time in 1972.

That being said, the 70-year-old grandfather is in no shape to put the pads on and try to cover a wide receiver. Don't get me wrong. His wife still makes him jog on the treadmill and he can dance a mean "Cupid Shuffle," but the guy had a freaking hip replacement, for crying out loud.

Lane Kiffin doesn't care. Leading up to Alabama's 2020 matchup against the Ole Miss Rebels in Oxford, Mississippi, he called out the coach he formerly served as offensive coordinator.

Who said Lane Kiffin vs. Nick Saban couldn?t be fun?

During Wednesday appearance on @dpshow, Kiffin noted that Nick Saban couldn?t cover him.

RELATED: Lane Kiffin's Impression of Nick Saban Cracked Everyone Up

That's Kiffin, who is 47, telling Dan Patrick on his radio show that a man 28 years older than he is, can't cover him. This is why I love the SEC and am so excited for Kiffin to be a part of the SEC West.

"I don't play and he doesn't play. We'd have better chances if that was the case. I don't think he can cover me," Saban told Patrick. "I was talking to him the other day I'm really worried about coach. He's elderly."

Don't think Saban didn't have an answer for that.

Nick Saban responds to @Lane_Kiffin comments about him being elderly, unable to cover him if he was a DB in a game. pic.twitter.com/unbo4bYPLx

Thank you to whoever asked Saban this question at his mid-week press conference, because it needed a response.

"I think he's probably right. I wouldn't disagree with him. I guess what I would ask is when he's my age what's he gonna be like?" Saban said as he cracked a smile. "It's a little bit of a disadvantage to be my age and have had a hip replacement, but I still pride myself in my ability to cover. I just don't think I could cover him."

This whole ordeal is hilarious and figures to be a main talking point during their matchup.  expect any surprises, though, because Saban previously improved to 20-0 against former assistants after beating Jimbo Fisher's Texas A&M Aggies in the season warped by COVID-19.

The Final Battle: The Only Thing That Really Counts 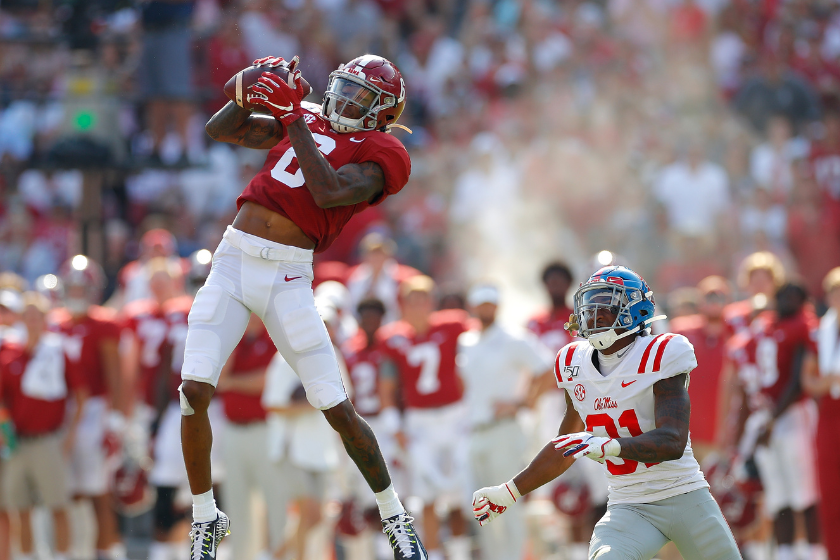 So what happened during the game? Well, Alabama fans can answer this one pretty easily considering the 2020 Crimson Tide went undefeated in 2020, on their way to a National Championship title. Saban's squad hung 68 points against Kiffin's Rebels, who did manage to score 48 of their own.

The stat sheet for this game is also hysterical. Both quarterbacks, Alabama's Mac Jones and Ole Miss' Matt Corral, threw for over 365 yards, with Jones tossing 417 total on the day. Ole Mis wideouts Elijah Moore and Kenny Yeboah amassed over 320 yards of offense through the air, while their Alabama counterparts, DeVonta Smith and Jaylen Waddle, hauled in 280 yards on 19 catches.

The offensive explosion didn't stop in the air. On the ground, Alabama's fleet-footed phenom, Najee Harris, rushed for over 200 yards and FIVE touchdowns against the Ole Miss defense. Alabama had difficulty stopping Ole Miss' ground attack as Jarod Conner and Jarrion Ealy put up a combines 248 yards, with both rushers eclipsing the century mark.

I know what you're thinking. Where there any defensive players playing in this game? Did Ole Miss and Alabama agree to field Pop Warner defenses just for one day?

Ole Miss would then go on a three-game losing-streak, finally stopping their skids against Vanderbilt, which is Vandy's only real purpose in the SEC. Lane Kiffin's first season wouldn't recover as the Rebels finished the season 5-5 in his first season as head coach. Alabama's 63 points would be the most Ole Miss would surrender all year.

It's All Water Under the Bridge... For Now 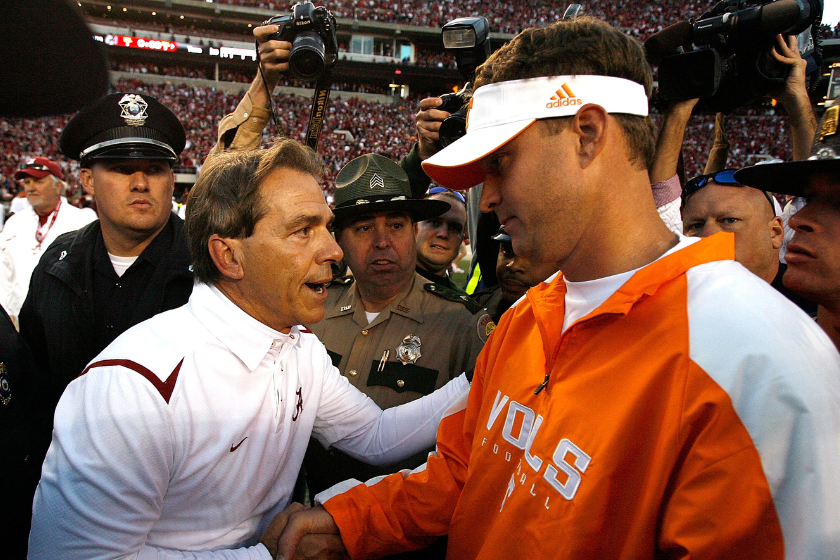 What if they settled their differences by guarding each other? I think just about any route Kiffin runs against the Alabama coach results in a touchdown, personally. I'm not sure social media is ready for that.

But then again we'll find out when Alabama and Ole Miss face off.

This article was originally published on October 8, 2020, and has been updated since.