The top coaching candidates to replace Butch Jones at Tennessee 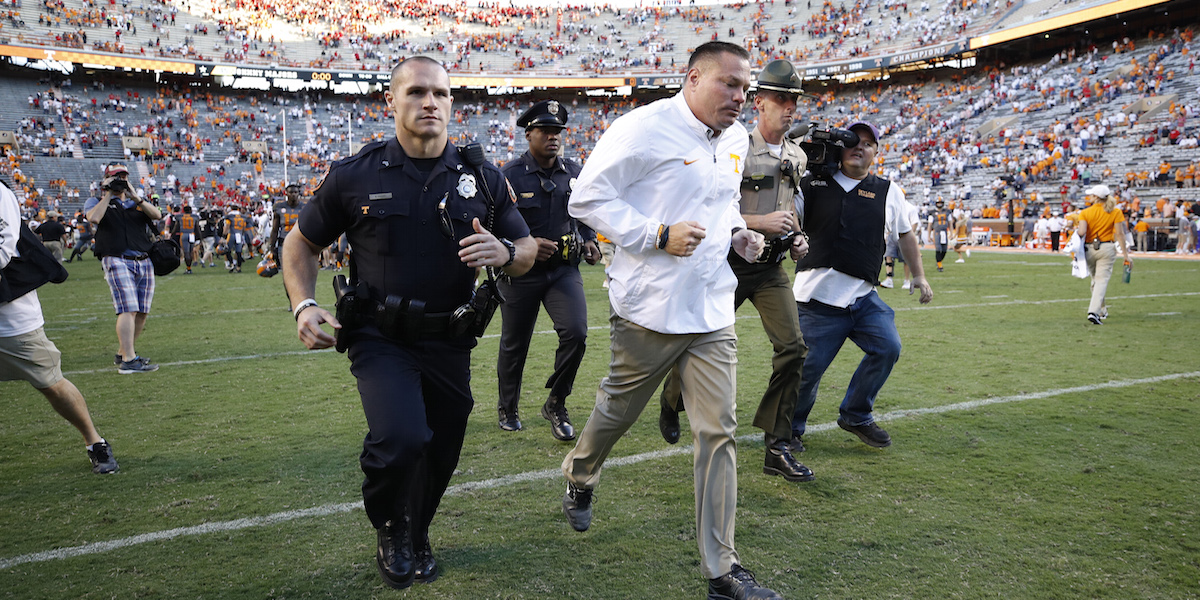 Several names have been linked to the Vols’ coaching position for weeks, but now that there is actually a vacancy, things will likely heat up in the coming weeks.

Here’s a look at the potential replacements for Jones in Knoxville.

Gruden?s past ties to the Tennessee football program have led Vol fans to believe that the former Super Bowl winning coach could possibly take over on Rocky Top.

The Monday Night Football broadcaster has also referred to the head coaching position at Tennessee as a ?dream job? on numerous occasions and expressed interest in coaching again, although he?s also downplayed the notion of coaching at the college level.

While many believe the Vols have no chance of landing the former NFL coach, the “Grumors” have continued to gain steam in recent weeks, including The Read Optional?s report that Tennessee offered Gruden ?over $10 million a year? to take over next season.

While his NFL coaching career left much to be desired, there’s no denying that Kelly was one of college football’s best coaches while at Oregon. The Ducks were consistently a national contender, made the inaugural College Football Playoff and quarterback Marcus Mariota became the school’s first Heisman Trophy winner during his tenure. He provides a big name and a perfect fit given Tennessee’s current roster. Put it this way, Kelly’s scheme is what Butch Jones’ would be if it was actually run correctly.

Scott Frost has already been linked to several upcoming coaching vacancies. Frost inherited a winless team upon taking over in 2016 and led Central Florida to a bowl game appearance during his first season, as well as an undefeated record in his first nine games in 2017.

While its more likely he’ll stay within state lines and join the Gators or return to his alma mater Nebraska, Frost is definitely a coach that is on the Vols’ radar.

Dan Mullen currently holds a 68-45 (32-38 SEC) head coaching record and has led the Bulldogs to seven consecutive winning seasons. In 2010, Mississippi State earned its first No. 1 overall ranking in program history and finished with a 10-3 (6-2 SEC) overall record, earning Mullen several coaching honors including the AP and Athlon SEC Coach of the Year awards as well as Maxwell Football Club Coach of the Year award.

If Tennessee can sway him away from MSU, it’s definitely worth looking into.

Jim Bob Cooter was a fan favorite as a backup quarterback during his time at Tennessee. Though the Fayetteville, Tennessee native has strong ties to the university, it’s likely that he’s being groomed for an NFL head coaching position, especially given his recent success as the Detroit Lions’ offensive coordinator.

For some reason, Bob Stoops’ name has been thrown out during the discussion of Tennessee’s upcoming coaching search. I personally believe that he chose to retire for a reason, which would prevent him from taking another job. Seriously, why would he leave a potential national contender like Oklahoma just because?

Les Miles has his supporters and his doubters, but there’s no denying his consistent success during his tenure at LSU. Miles led the Tigers to a national championship in 2007 and kept the program consistently in national contention for the majority of his run in Baton Rogue. Of course, there’s also the ties to the SEC and the Louisiana recruiting pool.