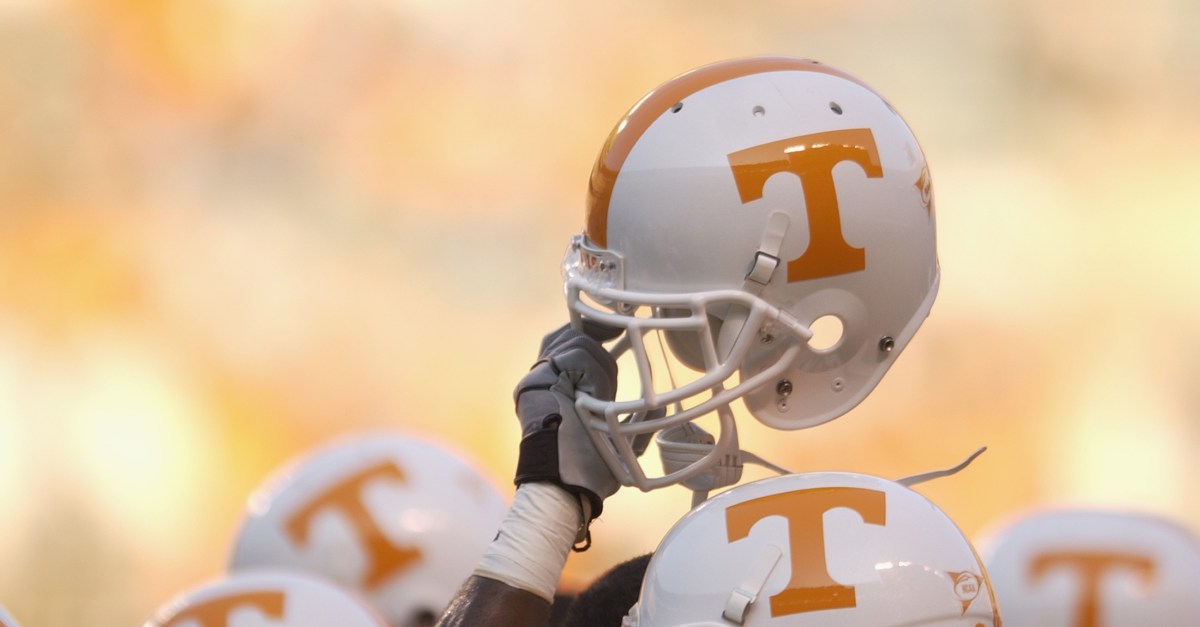 Elsa/Getty Images
KNOXVILLE, TN - SEPTEMBER 7: A Tennessee Volunteer holds up his helmet in the team huddle before the NCAA football game against the Middle Tennessee State Blue Raiders at Neyland Stadium on September 7, 2002 in Knoxville, Tennessee. Tennessee won 26-3. (Photo by Elsa/Getty Images)

Tennessee’s coaching search has become one of the most talked about storylines in college football.

After a tumultuous attempted hire of Ohio State defensive coordinator Greg Schiano on Sunday, UT’s athletic department turned its focus on Oklahoma State coach Mike Gundy, who decided to instead stay with his alma mater on Tuesday night.

Now, the Vols remain coachless and are still searching for answers. Here’s what we know about their search as of Wednesday morning.

WNML’s Jimmy Hyams reported that UT officials met with SMU coach Chad Morris in Dallas on Tuesday night after the reported deal with Gundy fell through.

Tennessee interviewed SMU coach Chad Morris Tuesday night in Dallas. Morris was a long time successful high school coach in Texas who was an assistant at Tulsa and Clemson before taking over at SMU. The Mustangs were 7-5 this season

SOURCE: #Tennessee has expressed interest in #SMU coach Chad Morris but there's been no interview.

Feldman also reported that despite UT having  “some interest” in Morris, it has instead turned its focus on Purdue’s Jeff Brohm, North Carolina State’s Dave Doeren and USC offensive coordinator Tee Martin.

Brohm holds a 36-16 overall record as a head coach. He went 30-10 (19-5) during three seasons at Western Kentucky, leading the Hilltoppers to three consecutive bowl game appearances and two consecutive first-place finishes in the Conference USA standings before taking over at Purdue this offseason.

Martin, who led the Vols to a BCS Championship in 1998 as the starting quarterback, has quickly risen up the ranks as a young assistant with a bright head coaching future, having been named as a Broyles Award semi-finalist on Tuesday.

Washington State’s Mike Leach is also a candidate that has reportedly piqued athletic director John Currie’s interest. However, Leach’s past lawsuit against Texas Tech following his termination is something that, according to Feldman, is difficult for Currie to overlook.

Am told #Tennessee AD John Currie's intrigued with Mike Leach but the WAZZU coach having sued his old employer is a tough one for him & the #Vols to get past.

Leach was terminated after being accused of ordering Adam James, son of former SMU standout and ESPN college football analyst Craig James, to stand in the equipment room near the Red Raiders’ practice facility after suffering a concussion.

Hyams also reported that Auburn’s Kevin Steele, who played linebacker (1978-79) and began his coaching career at Tennessee, is also expected to be on the Vols’ radar.

Steele has spent the majority of his career working as a defensive assistant, but also had a previous head coaching stint with Baylor from 1999-2002, which resulted in a 9-36 (1-31 Big 12) overall record.

It’s also worth noting that former Tennessee backup quarterback and current Detroit Lions coach Jim Bob Cooter is not a candidate for the job, as he will continue to pursue an eventual NFL head coaching job, according to NFL Network’s Ian Rapoport.

With the University of Tennessee job still open, worth noting that #Lions OC Jim Bob Cooter, a UT alum, would be a candidate. But he won’t interview and will focus on Detroit, I’m told. His eventual goal is to be an NFL coach.