Mike Gundy has made his decision on Tennessee head coaching offer 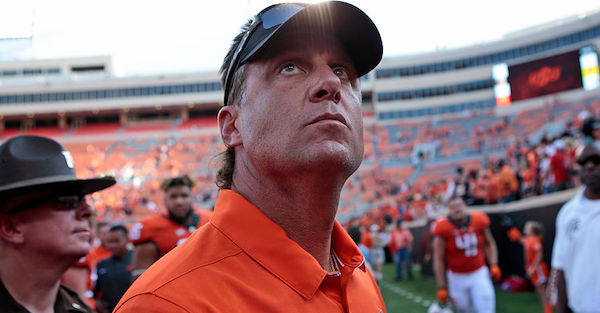 Gundy reportedly met with UT representatives in Dallas and turned down a 6-year, $42 million deal, opting to stay with his alma matter, according to McMurphy.

Sources: Mike Gundy has decided to remain at Oklahoma State. He met w/Tennessee officials Tuesday in Dallas. Gundy reportedly had a 6-year, $42 million deal from Tennessee, but will remain at his alma mater https://t.co/m1igbKIEpx

Gundy, an Oklahoma native and Oklahoma State alum, has spent the majority of his career working in his home state. He began his career as a wide receivers coach in 1990, switched to quarterbacks coach in 1991 and spent two years as offensive coordinator beginning in 1994.

After a season as Baylor’s PGC/QB coach and four seasons as Maryland’s PCG/QB/WRs coach, Gundy returned to the Cowboys as assistant head coach and offensive coordinator under Les Miles in 2001, before being promoted to head coach in 2005.

On Sunday, Tennessee reportedly reached a memorandum of understanding with Schiano, which led to protests on social media and UT’s campus by Vol fans, leading to a breach in the agreement.