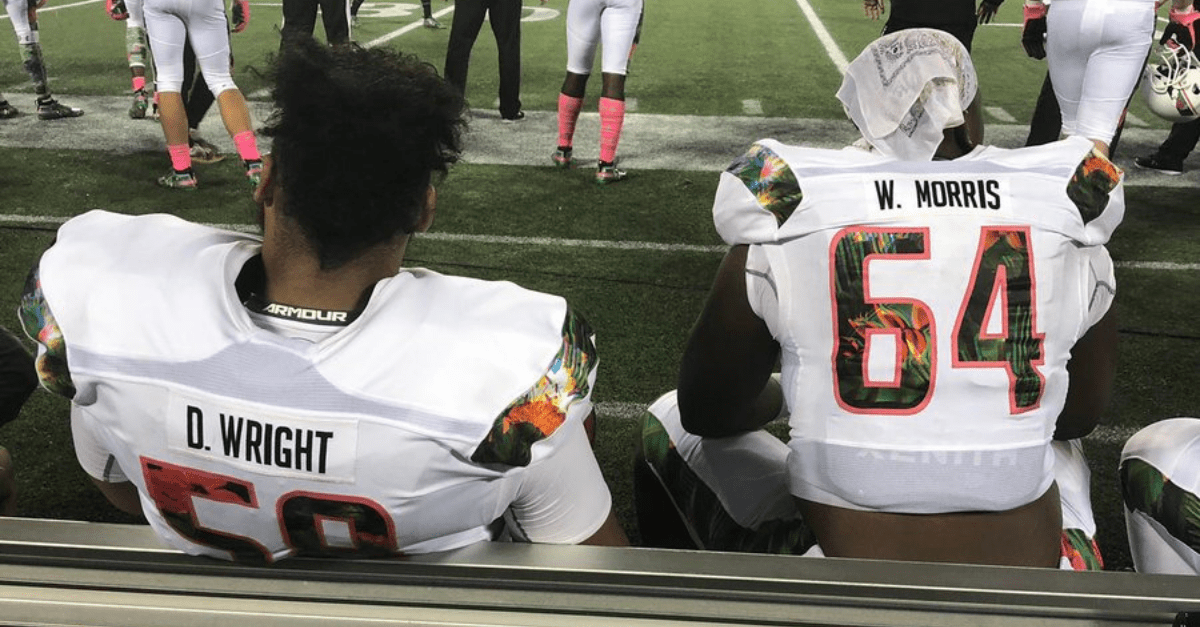 The 2018 college football season wasn’t kind to the Tennessee Volunteers. In head coach Jeremy Pruitt’s first year, the Vols struggled to do anything on offense, and they allowed 42.5 points per game in their seven losses. However, Pruitt and his Tennessee football staff still managed to have a top-25 recruiting class coming into last season. With what happened on National Signing Day in 2019, the Vols are turning heads all over college football with the talent coming to Knoxville.

Five-star offensive tackle Darnell Wright, rated as the No. 2 offensive tackle in the country, was the final piece of the Volunteers’ puzzle. On February 6, Wright unzipped his jacket at Huntington High School in West Virginia to unveil an orange and white Volunteers T-shirt, announcing his commitment to the University of Tennessee.

Entering NSD, Wright was the highest-rated player left in the country who hadn’t made his college decision, as most recruits committed during the NCAA Early Signing Period back in December. With massive offers from Alabama, Clemson, North Carolina, Tennessee and West Virginia, it took a little longer for the 6-foot-6, 320-pound tackle to choose.

Despite the West Virginia Mountaineers making a late push, it wasn’t enough to keep Wright in his home state. The mild-mannered mauler joins another five-star offensive tackle, Wanya Morris, at Tennessee as part of program’s highest-ranked recruiting class since 2015.

The Under Armour All-American was named First-Team All-State in West Virginia as a senior and junior, plus earned a second-team nod as a sophomore. Even as one of the most highly-touted recruits in the country ? and one of the best football players to come out of West Virginia since Randy Moss ? Wright’s quiet personality didn’t seem to enjoy the recruiting process.

In an article from The Herald-Dispatch, Wright talked about the buzz surrounding his recruitment, which involved people trying to “be a part of something that they’re not” and influence his decision. He kept a small circle and remained patient before committing anywhere.

“I don?t look forward to talking to anybody about anything ? especially people I don?t know. People expect you to want to be a part of that process and this kind of figure, but I don?t really care about it. That?s just not who I am, so it?s different to me. Everyone thinks it?s weird that I don?t want to talk about it.”

? Darnell Wright, via The Herald-Dispatch

Adding Wright as the top-player for Jeremy Pruitt’s program on National Signing Day is a huge deal. The Volunteers weren’t done, though, as they’d already inked another blue-chip talent before Wright’s announcement.

Earlier in the day, four-star outside linebacker Henry To’oto’o committed to the Volunteers over Alabama, Utah, USC and Washington. According to 247Sports, the 6-foot-2, 230-pounder is the No. 3 OLB in the nation and the seventh-best player in the state of California. His senior season at De La Salle High School in Concord (CA) saw his team reach the CIF Division state championship game where he proved just how impressive of a young man he really is.

To’oto’o broke his foot in practice the day before the state championship. Less than 24 hours later, he played in that game and made six tackles.

Not surprisingly, he won the multiple awards as Northern California’s defensive player of the year.

That makes a five-star offensive tackle, the toughest linebacker in the country, and another 21 players who will be heading to Knoxville in 2019. It’s safe to say that the Volunteers’ fan base shouldn’t expect to see many more 5-7 campaigns with the SEC-caliber talent they now have on this football team.