Look, Peyton Manning was and always will be one of the best quarterbacks in SEC history. What he accomplished in Knoxville -- all the trophies and school records that still stand -- can never be taken away.

But we need to talk about the new(ish) man on campus: Hendon Hooker. After transferring from Virginia Tech, Hooker burst on to the scene last year at Tennessee, throwing 31 touchdowns to just three interceptions while changing the course of the Volunteers program.

Three games into the 2022 season, the No. 11 Tennessee Volunteers have a score-at-will offense powered by a legitimate Heisman Trophy candidate that's making this writer wonder more than just, "is he the best quarterback Knoxville has seen since Peyton?" I'm curious if he'll be better than Peyton Manning was when his career is over. 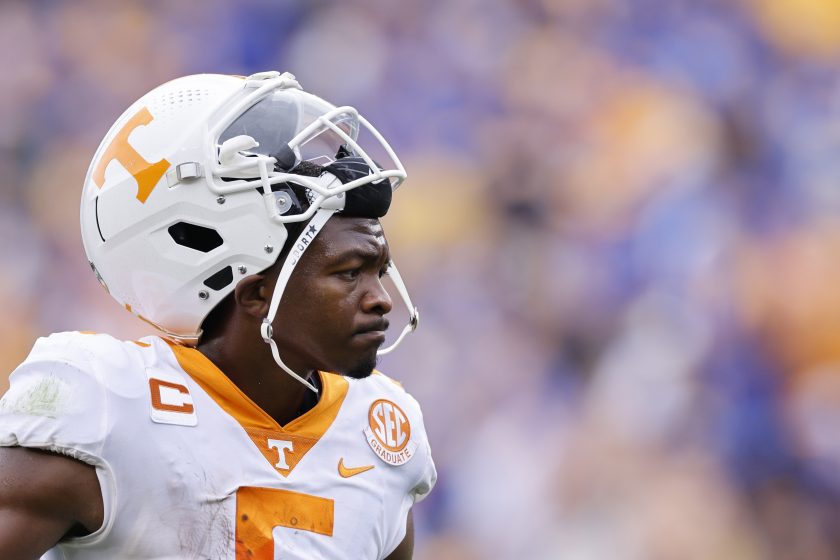 RELATED: Tennessee's "Running Through the T" Tradition is One of College Football's Best

Some old folks may have already stopped reading and said, "Yeah, right. He's nowhere near what Peyton was."

For that, we'll get real nerdy. Since becoming the starting quarterback for the Vols, Hooker has 42 touchdowns to his name and just two interceptions, as ESPN's Peter Burns pointed out on Twitter.

Stat that blows my mind....

Since becoming the starter for @Vol_Football:

And if you look into how he's changed Tennessee, it's apparent in their offense. Head coach Josh Heupel's uptempo, spread offense has been unstoppable this season. Tennessee is scoring 52 points per game (fourth in NCAA) and racking up 553.7 yards per game (third in NCAA).

Just how much of a change is this from the Tennessee of years' past? Before the arrival of Heupel and Hooker (who transferred from Virginia Tech the same month Heupel was hired), Tennessee ranked 108th in points per game in 2020. Yeah, there were 107 higher-scoring offenses than a behemoth SEC program.

Tennessee finished seventh in PPG last season, and it's clear Hooker is the engine of this supercharged Camaro as the Vols continue to shred defenses in 2022.

Here's a pretty good video from last year's game against Alabama showing exactly why an uptempo offense can give defenses fits:

Couple of examples from the (long) film study on Hendon Hooker (https://t.co/W9HJ2ueI2z). I think this is an example where the fast-pace of #VOLS offense helps get defenders a few steps out of position, which can mean everything (1/2) pic.twitter.com/NlsMme9TYQ

Hooker has the arm to make all the throws in the SEC. He's got wheels, too. If he plays as mistake-free as he did in 2021 this season, Tennessee has a legit shot to make some noise out of the SEC East even with the well-oiled Georgia Bulldog machine in the way. 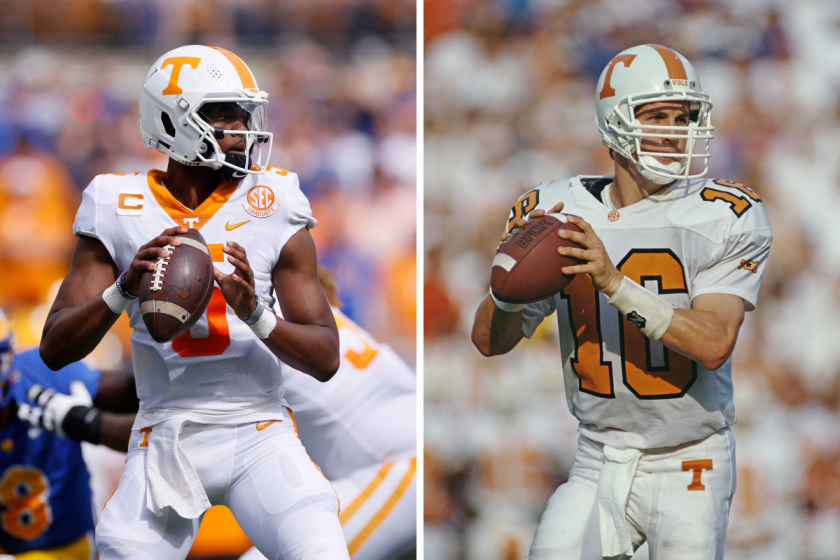 Like I mentioned before, Tennessee hasn't had a quarterback like Hooker since the Peyton Manning era. And there's a real case to be made that Hooker has been better.

In Manning's Tennessee debut -- against Mississippi State in 1994 -- he threw two interceptions in an upset loss. Hooker has thrown just two interceptions as the starter across two seasons. Of course, Manning did go 7-1 as a starter that season and won SEC Freshman of the Year, so things got better.

But even looking at both Hooker's and Peyton's passer efficiency ratings, Hendon holds the edge:

Hooker's 181.4 and 170.8 marks this season are a ton better than what Manning put up in his four years, though I have to give Manning some credit for the consistency. Hooker is also completing a higher percentage of passes.

Peyton owns the University of Tennessee football record book -- his 36 passing touchdowns in 1997 still stand as the school's single-season record and his 3,789 yards of total offense the same season are also a school record. But considering Hooker's 3,561 total yards last season, it's not unfathomable to think Hendon Hooker could overtake those records in 2022.

Another gold star for Hooker is his 15-straight games with a touchdown pass, something Manning never managed. Hooker also has a chance to accomplish something else Manning never did: beat the Florida Gators.

As ESPN's "College GameDay" comes to Knoxville for a Rocky Top showdown between Tennessee and Florida this weekend, UT fans likely can't help but think of the history. Tennessee has lost 16 of the last 17 matchups in this series. Its only win came in 2016 at home.

Peyton got three shots against Steve Spurrier's Gators as the starter, and he went 0-3. Hooker loss to Florida last season, but his team is clearly the better one this year.

With each game comes more expectations for Tennessee's Hendon Hooker, who could be selected in the first couple rounds of the 2023 NFL Draft. Even if he doesn't, he's already turned Tennessee around.