I've only been to the great Neyland Stadium once, and it was in 2016 for the Florida-Tennessee game. It was the epitome of college football and, more specifically, SEC football.

From the orange-and-white checkered sections of the stadium to hearing "Rocky Top" played by the band some 20,000 times, it was immediately clear to me when I sat down in the press box that the fans in Knoxville don't play around.

Like something biblical, the band makes a 'T' formation and parts down the middle. That's when the entire University of Tennessee football team, led by Smokey the dog, runs out on to the field right through the damn middle of that T. It's a staple in college football and one of the must-see traditions for visiting fans in Knoxville.

How Tennessee's "Running Through the T" Tradition Began 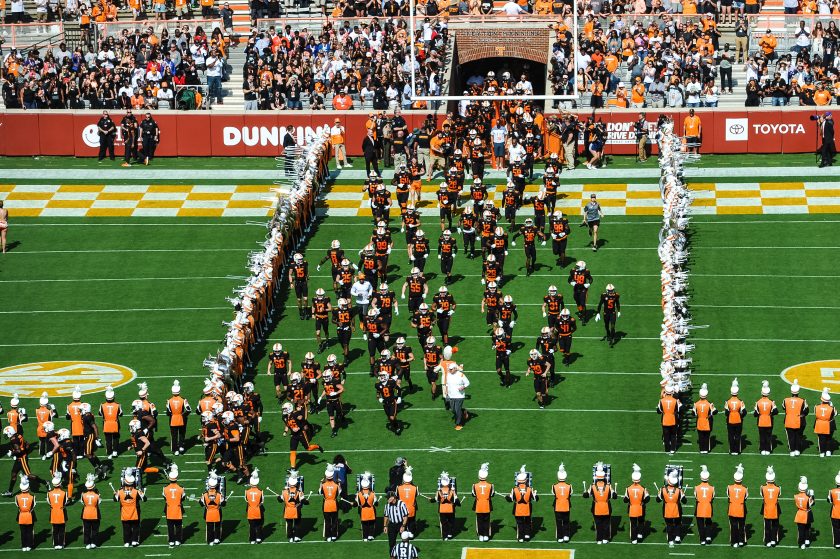 The tradition began with two men.

The first was former Tennessee men's basketball coach Ray Mears. Back in 1962, Mears would run through the 'T' before each home game. The first 'T' was a big, wooden one with swinging doors that was built by the school's student pep club.

A few years later, Doug Dickey -- the school's football coach who manned the program from 1964-69 and later was the athletic director from 1985-2002 -- introduced the tradition to the football field. Dickey approached the band's director and made it happen.

The first time Tennessee ran through the 'T' was on Sept. 18, 1965. The Vols beat Army, 21-0, and a tradition was born. More than 50 years later, the team still splits the letter and it's still just as electric.

"It is almost a gladiator type of moment. That's how I used to think of it," longtime Tennessee head coach Phillip Fulmer told NCAA.com. "You prepare for this battle you're going to have, being introduced and be acknowledged by the fans, led by cheerleaders and the band playing."

There's nothing like that roar of the crowd when the band splits and the T opens up.

The greatest entrance in college football.

Tennessee's "Running Through the T" tradition is an iconic one, and if you're ever in Knoxville for a game, make sure to get to your sets before the game. You don't wanna miss it.