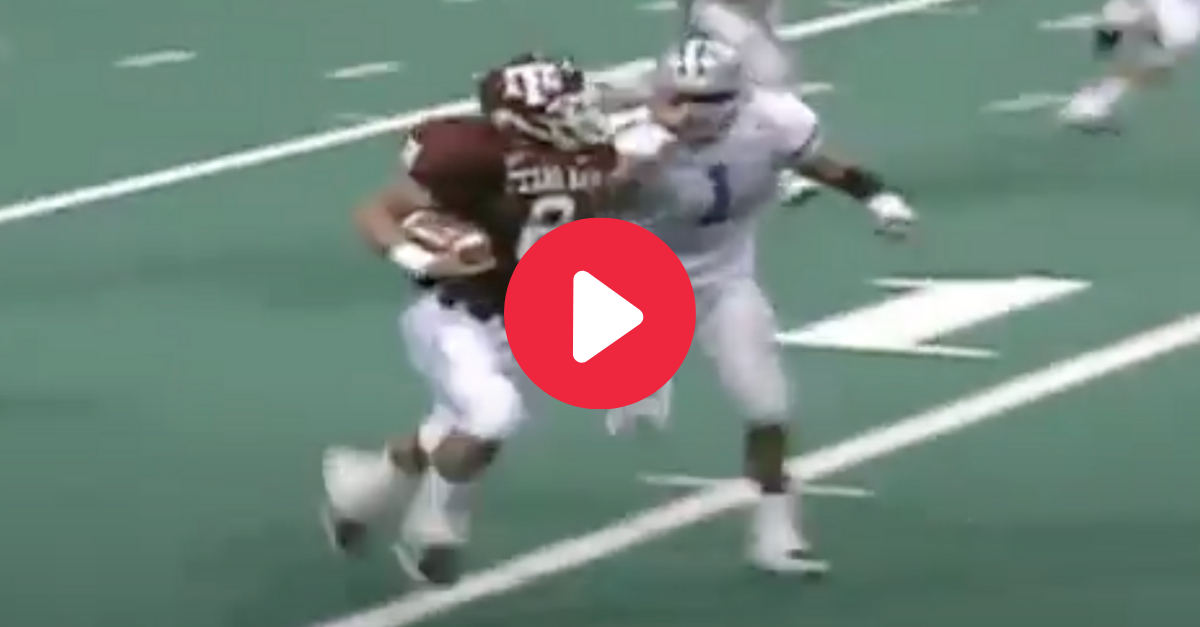 Every college football legend has one game. One game to make their name household. One game — heck, even one play — is all it takes for fans to think back and say, “this is the moment he proved how great he was.”

For Texas A&M University football, it isn’t hard to recall when the Aggie greats cemented themselves in school lore. Johnny Manziel garnered national attention when he took down No. 1 Alabama as a freshman in 2012. Mike Evans torched Auburn in 2013 for a school-record 287 yards and four touchdowns. Yet some Aggies, like linebacker-turned-fast-food-franchise-owner Dat Nguyen, were just flat-out dominant their entire careers.

But Nguyen did play for a team in which another Texas A&M Aggie legend was born: running back Sirr Parker, who should have his own statue outside Kyle Field in College Station after his improbable game-winning touchdown against Kansas State University captured TAMU’s last conference championship in the 1998 Big 12 Championship game.

The Aggies entered the title game 10-2. They had no shot at playing for a national championship, but they could play spoiler. The undefeated Wildcats came to St. Louis’ Trans World Dome boasting an 11-0 record. All that stood in the way of their first-ever national championship berth was coach R.C. Slocum’s Aggies.

Down 27-12, Texas A&M’s hopes looked bleak heading into the fourth quarter. Touchdown passes to Leroy Hodge and Parker, who also converted the game-tying two-point conversion knotted the game at 27-27 and sent it to overtime.

The two teams traded field goals in the first overtime, and K-State managed another three points via kicker Martin Gramatica with their second possession to take a 33-30 lead.

Third and 17. Texas A&M needed to at least convert a first down. The Aggies sit at their opponent’s 32-yard line. One touchdown and the game is over.

Parker motioned out of the backfield down toward the right sideline. He ran a quick slant and blazed past a Wildcat cornerback. He cut back outside and outran safety Lamar Chapman, who got his paws on him but couldn’t bring him down before crossing the goal line for the game-winner.

At the time, it was the Aggies first and only win over a No. 1-ranked team in school history. It just so happened to be for a Big 12 Championship, too.

What’s as unlikely as the play was that Parker was even healthy enough to play in the first place. The running back had a nagging hamstring injury all season and hadn’t been able to practice the week leading up to the title game.

So Slocum referred Parker to a friend’s doctor that performed what he called a “voodoo thing,” that the school’s training staff was skeptical about.

“Dr. Susan Grimshaw. It was strange what she did. But she could feel the energy in her hands. She dug her thumb into my leg. Then she had me hold a single ice cube on my leg until it melted. That was it. I was healed 100 percent. Everybody was calling her the ‘Voodoo Doctor.’ I still don’t understand what she did.”

TAMU went on to lose to Ohio State in the Sugar Bowl but finished the season 11-3 and No. 11 in the final Associated Press poll.

The only other time the Aggies have finished with 10 or more wins since 1995 was in 2012, when they went 11-2 thanks to Manziel’s brilliant freshman Heisman-winning campaign.

Parker’s legendary game was an awesome culmination of sorts. Born Sirr Eluan Parker in Los Angeles, California, Parker and his infant brother Donyea were abandoned by their mother, who struggled with alcoholism and drug abuse. They were raised by grandparents and later stayed with their aunt and uncle.

Despite Parker’s tough upbringing, he grew up in South-Central Los Angeles and went on to star at Alain Leroy Locke High School. There he won Los Angeles Times Player of the Year and earned Second-Team All-American honors from USA Today as a senior. He also won homecoming king and maintained a 3.9 grade-point average.

Schools like USC, UCLA, Washington and Notre Dame all eyed him, but Parker accepted a scholarship to play for Texas A&M in 1995 to be closer to Houston, where his brother was living with an aunt.

The 5-foot-10 speedster rushed for 2,000 yards, caught another 400 and scored 19 touchdowns. His junior season was by far his best as he totaled 994 yards from scrimmage and 10 touchdowns.

Sirr Parker with the game winning touchdown back in '98. #TBT pic.twitter.com/iPKYBQK7yJ

After not being taken in the 1999 NFL Draft, Parker bounced around the National Football League with the Cincinnati Bengals, San Diego Chargers and Carolina Panthers for a couple years. The American football player tried his hand in the Canadian Football League and Arena Football League and last played in a semi-pro league in 2006 and earned league offensive MVP.

Sirr Parker may not rank among the Manziels, Evans and Nguyens of A&M history and never saw success in the NFL, but on that December night in 1998, he became an Aggie legend.

MORE: ?McNeal to Porter? Ignited Aggies? Upset Over No. 1 Oklahoma