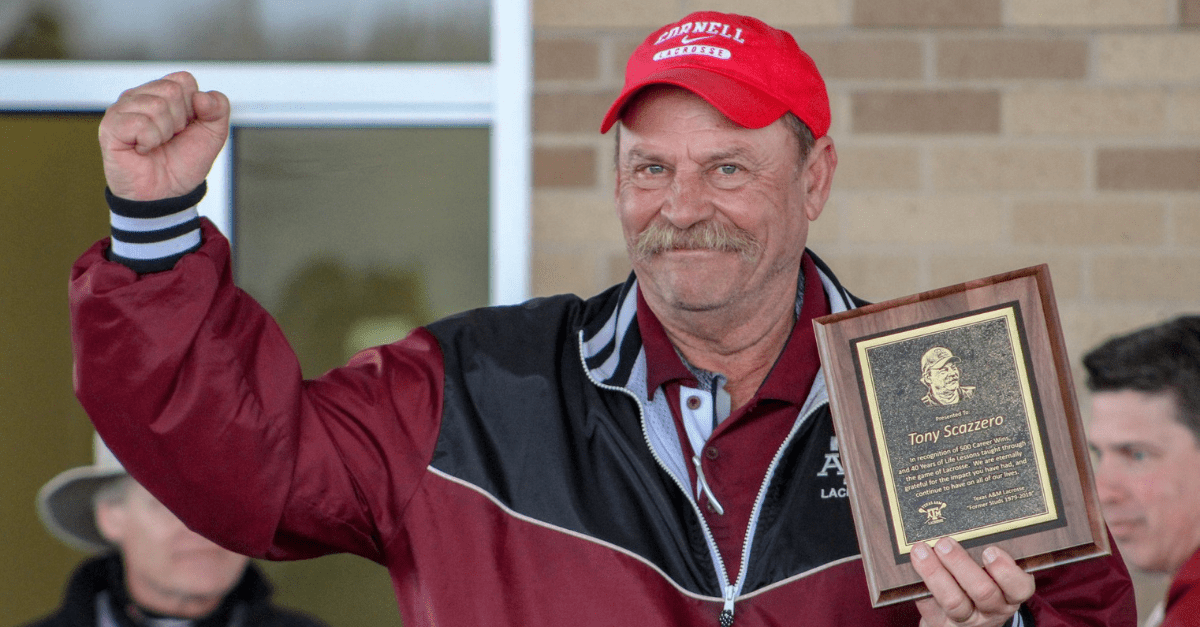 Not only did the Texas A&M Aggies men’s lacrosse team start their 2019 season undefeated, but head coach Tony Scazzero made history with win No. 500 after defeating the Texas State University, 15-8, in front of the home crowd at College Station.

The Aggies then added victory No. 501 for good measure the day after against their interstate rival Texas Longhorns, 12-11. Hopefully they can keep this magic going and ride this wave into a championship this season behind their legendary head coach.

Tony Scazzero took over as head coach of the Texas A&M lacrosse team in 1978, and his very first victory happened on April 8, 1978 against the Dallas men?s club. So yes, it was nearly over 41 years ago when the win total count started ? and with Scazzero’s recent knee replacement ? it looks like he may be able to win a few hundred more before he hangs it up.

.@TexasAggieLax coach, Tony Scazzero, secured his 500th career win this weekend over Texas State, and then went on to #BTHOtu for win #501! 👍 Thanks for all you’ve done for @TAMU & @tamusportclubs, Coach Scazzero!

Scazzero was always involved in sports, but his experience in lacrosse naturally turned him into a coach. He born in Elmsford, New York and attended Sleepy Hollow High School, a place where Lacrosse is a huge sport. Scazzero went on to become a Division I lacrosse player at Cornell University, and he also played semi-pro baseball and fast pitch softball.

Not only was he a player, but he was also active on the administrative side of the sport. Scazzero was the President of the Men’s Collegiate Lacrosse Association (MCLA) national club lacrosse organization and resigned in 2013. He was also honored in 2018 by the MCLA Coach of the Year.

Not caught on video: Him telling us all we did a really good job today and totally didn’t cuss at us for dumping water on him on a chilly/windy February afternoon pic.twitter.com/taFdKJhYCM

Some people may ask why 500 victories is such a big deal in college sports, especially at Texas A&M.  After all, there are other Texas A&M programs that have coaches with 500 wins. There are coaches in football, men’s and women’s basketball, and of course baseball that have reached this milestone. However, all of these sports have been played for decades, and there are far more regular season games that allow those win totals to add up more quickly.

All of these victories are great wins for the university and a testament to the excellence that Texas A&M performs at across all sports. In this stat-driven, number-crunching sports society we live in, it?s important to put into context how great of an accomplishment 500 victories are.

Congratulations to Coach Scazzero because in the sport of lacrosse with so few games being played, this is an amazing accomplishment.