It doesn't take a genius to know that you should never boot a kickoff to the opposing team's speediest, most elusive returner. If Devin Hester 2.0 is anywhere on the field, I'd kick it out of bounds before gifting him the ball.

Last night during an FCS game between the UT Martin Skyhawks and the Missouri State Bears, one kicker rolled with that logic. But when UT Martin kicker Tyler Larco kicked the ball to a 300-pound lineman on Missouri State, he found out the hard way that...a 300-pounder might just be the team's best kick returner.

*Sheds tear* It's just so glorious.

Suliafu is listed at 6 feet, 298 pounds, and when that near-300-pound body gets moving, you better get the hell off the tracks. The defensive lineman caught the kickoff at about the 20-yard line, and it was off to the races. He broke about 10 tackles, including this insane image of the whole team trying to bring him down: 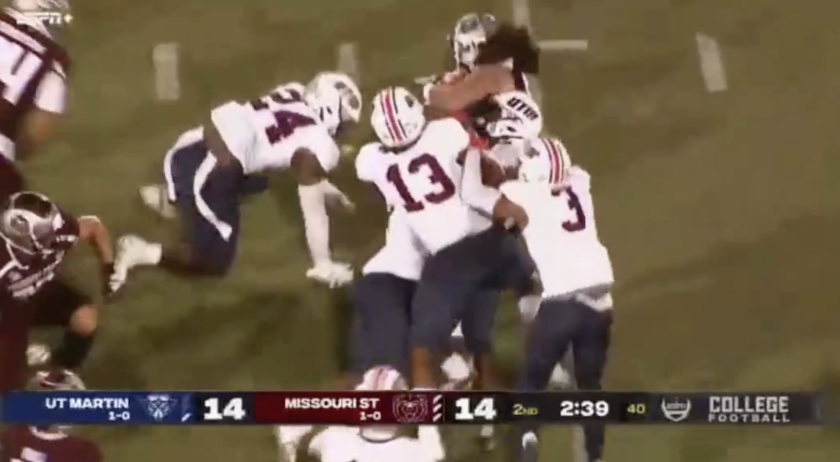 Yeah, he muscled his way out of that scrum. The big boy kept huffing and puffing his way past the 50-yard line before running out of gas. It was electric. You can even hear the crowd loving every single second of it.

Suliafu's return officially went down for 34 yards, but it felt like double that. The 300-pounder's return must have given his team momentum, because they drove down the field and scored a touchdown after that just before the end of the second quarter. Missouri State went on to win the game, 35-30.

The best part is that Suliafu has gone viral for kick returns before. Just this season in a game against Central Arkansas, the internet fell in love with his -4 yard return because he refused to go down. He even hurdled a dude!

This is the greatest -4 yard return you will ever see in your life. pic.twitter.com/nJScqKyjUE

After Suliafu's most recent return, Missouri State head coach Bobby Petrino (yep, that Bobby Petrino) had nothing but nice things to say about his big man.

"What a run, huh?" Petrino said. "That was awesome. But man, what a run. He came up to me after the game, he's the sweetest kid in the world and has the biggest heart and he gives me a big hug, and I said 'I can't believe it, man, they caught you from behind.' What a run. It was so much fun to watch and it fired up the whole team."