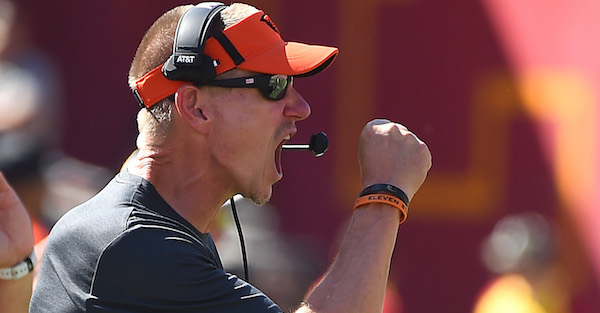 New SMU coach Sonny Dykes has his work cut out for him after watching his team give up 51 points in a bowl loss to Louisiana Tech, and Dykes reportedly has his sights set on a former head coach from the Pac-12 and Big 10.

According to Football Scoop, Dykes is “strongly considering” hiring former Oregon State and Wisconsin coach Gary Andersen as the defensive coordinator for the Mustangs.

Andersen resigned from Oregon State in October after starting 7-23 in 2.5 years in Corvallis. He was 19-7 in two years at Wisconsin, and he was 26-24 at Utah State.

Before taking the job at Utah State, Andersen was the defensive coordinator under Kyle Whittingham at Utah.

Dykes is an offensive guru, which means he would likely turn all of the defensive responsibilities over to Andersen.

Chad Morris left SMU for Arkansas, and Dykes is taking over after spending four years as the head coach at Cal. He was 19-30 at Cal, and he was 22-15 at Louisiana tech.

Andersen would certainly help on the defensive side of the ball. The offensive talent should be there for the Mustangs next season, but Dykes will need improvement from his defense if they’re going to continue building what Morris started.