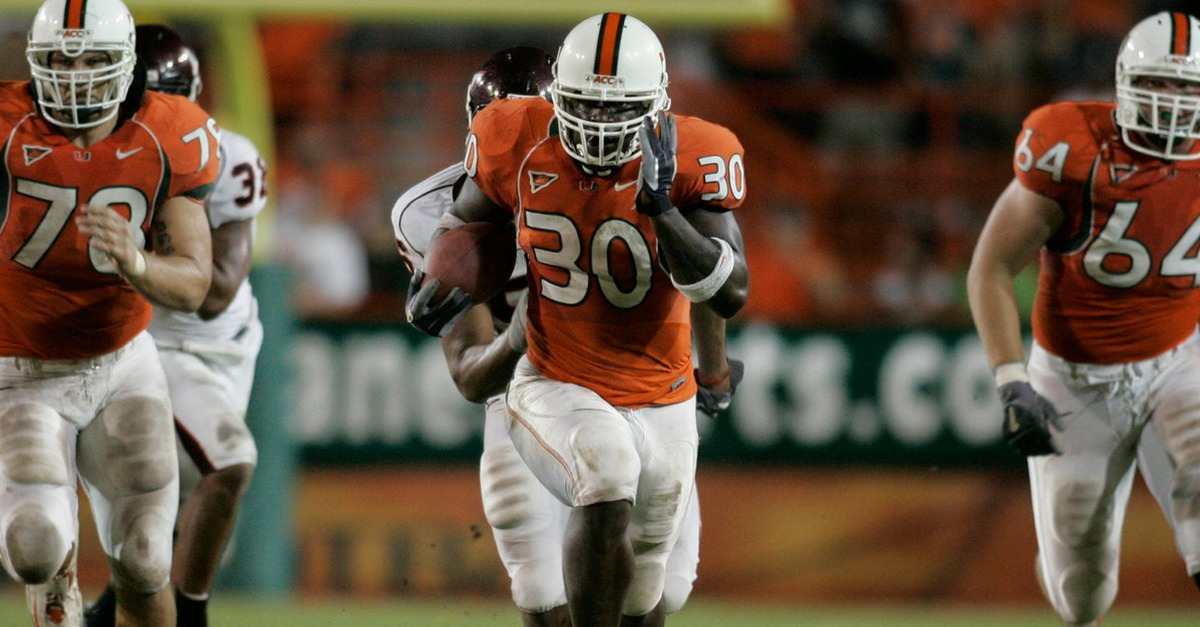 Tyrone Moss, who played for the Miami Hurricanes from 2003-06, died Thursday night, according to his former high school coach Steve Davis. Moss, who was dealing with an unspecified illness, was 33-years-old.

When Moss came to play at the University of Miami, he was considered one of the nation’s best running backs coming out of high school in 2002. Stepping onto the field in the wake of Miami’s early 2000s dynasty is no small task, but Tyrone Moss was up for the challenge.

Moss’ high school career is considered one of the greatest in Broward County history.

At Blanche Ely in Pompano Beach, Moss racked up for 7,407 career rushing yards and scored 108 touchdowns, both among the best in Broward County’s history.

According to the Sun Sentinel, Moss was named a Parade All-American and ranked among the top 100 players to ever play in the state of Florida.

Davis, who coached Moss at Blanche Ely, told the Sun Sentinel he was in “total shock” over hearing the news.

“He was, by far, the best player I’ve ever coached at the high school level. You had defenses and everybody that we played, all 11 guys knew he was going to get the ball. He’d still have 250 yards. You just couldn’t figure it out. My greatest moment was watching him in that state championship. He had over 200 yards. He was just incredible. He was a great football player, but he was a greater human.”

At the University of Miami, Moss continued his run of dominance, racking up 26 touchdowns in four seasons playing college football — his mark is still fifth all-time in Miami school history.

Despite a season-ending left knee injury, Moss was named first-team All-ACC in 2005. Marcus Vick, Calvin Johnson and Vernon Davis were fellow selections on that team.

One of our brothers was taken too soon.

Our thoughts are with Tyrone Moss' family and friends during this difficult time.

Former University of Miami running backs coach Don Soldinger told the Miami Herald of Moss, “Always smiling. Always. Great personality, just a pleasant guy. Good teammate. I wish he had pushed himself more. Of all the guys I coached, he should have played NFL football. He was a great talent.”

Injuries derailed the end of Moss’ playing career. After tearing his ACL towards the end of the 2005 season, Moss practiced with the Cleveland Browns during the summer of 2007, but was forced to retire.

He never played a snap in the NFL.

Honored for his personality and on-field ability, Moss will always be remembered as one of the best football players the state of Florida has ever seen, but more so for his character off of the field.

Moss’ cause of death is still unknown.