If you weren't aware, College Football made its return this week. Sure, there were a few games here and there during "Week 0," but this was the weekend when everyone really gets going.

The early slate of games got off to a slow start until Appalachian State got into a track meet with UNC and ECU came within a missed field goal of upsetting No. 13 NC State. By the time the evening games had gotten going, there were plenty of storylines being written.

One of the more prominent plays to come out of Saturday night slate of games took place at Camp Randall Stadium. It was there that the No. 18 Wisconsin Badgers of the Big Ten played host to Illinois State. 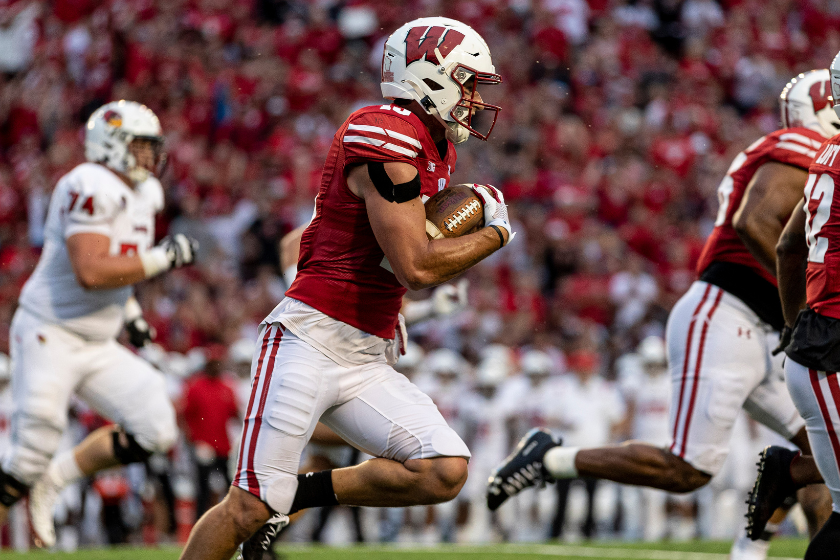 The Badgers and Redbirds exchanged rather uneventful drives to open the game. Illinois State punted after a 5 play, 13-yard drive that stalled after a sack from Wisconsin safety John Torchio on Illinois State quarterback Zack Annexstad. The Badger offense then went three-and-out after two short runs by Braelon Allen and a Graham Mertz incomplete pass. Once Illinois State got the ball back, the Redbirds would eat up almost nine minutes of the first quarter as they drove deep into Wisconsin territory, putting themselves in a position to open the scoring. That's when THIS happened:

That pick-six set the record for the longest interception return for a touchdown in school history. The 100-yard scamper to the end zone broke the previous record, a 99-yard pick-six by Joe Ferguson in a victory over Utah State back in 2017. Wisconsin rode the energy from that play into the second quarter, where they wasted no time setting yet another record.

Braelon Allen with the longest touchdown run in #Badgers history.

Only a minute and a half into the second, the latest product of the Wisconsin Running Back Machine, Braelon Allen bounced off of a couple of would-be tackles to break off a 96-yard touchdown run of his own. That run bested the previous record for the longest run from scrimmage when James White, who recently announced his retirement from the NFL, took one 93 yards for a touchdown against Indiana in 2013. By then, the floodgates had opened and Wisconsin wouldn't look back. At the end of the first half, the Badgers were up 17-0. They'd go on to shut out the Redbirds by a score of 38-0.

It was a dominant start to Wisconsin's season, albeit against a Division II opponent. Nonetheless, head coach Paul Chryst will look to build some momentum from this victory as they try to finish on top in the Big Ten West. The competition will only get tougher as they make their way through the schedule, facing opponents like Ohio State (who had a massive win against Notre Dame in Week 1), Iowa, Nebraska, Minnesota, Purdue, Penn State and Michigan State. Will any more records be broken over the course of the Badger season as they try to play their way into the College Football Playoff conversation? Time will tell to be sure.