The worst part about being a Nebraska fan is the hype. Since Scott Frost was hired in 2018, we enter each season thinking this year will be different. But, time and time again, we quickly learn it's not. Frost makes baffling coaching decision after baffling coaching decision, we false start on a crucial third down, we fumble when we have an opportunity to take the lead against one of the country's best teams late in the fourth quarter, we give up a game-changing punt-return touchdown after dominating the whole contest, we miss extra points, we punt backwards. If the Nebraska football program's foot was intact four years ago, it's been shot to obliteration.

At this point, I'm convinced Frost has a side career as an author and has been secretly writing "1,000 Ways to Lose a Football Game." His editors were shocked on how quickly he finished the first draft. The 1,001st or 10,000th -- I've lost count -- came in the third quarter against Northwestern at Aviva Stadium in Dublin, Ireland.

The Onside Kick Heard Around the World

Nebraska attempts the onside kick but Northwestern comes up with it pic.twitter.com/XRVWZ8owok

RELATED: Nebraska's Fumble Against Northwestern Gave Us the First Questionable Call of 2022

A new batch of Kool-Aid was brewed before the 2022 season. Boy, did it taste nice. Frost fired a majority of the offensive staff he brought with him from UCF and hired offensive coordinator Mark Whipple, who led Kenny Pickett to a breakout year at Pitt in 2021, and wide receivers coach Mickey Joseph, who helped develop NFL stars Justin Jefferson and Ja'Marr Chase at LSU. Under center, four-year starter Adrian Martinez transferred to Kansas State and Texas transfer Casey Thompson replaced him. Additionally, Frost hired Bill Busch to be the full-time special teams coordinator after what critics are saying was the worst special teams performance in college football history in 2021.

All these changes appeared to be paying off until the third quarter of the Week 0 game against Northwestern. Nebraska scored to take a 21-17 lead, forced a fumble on Northwestern's next drive, then scored another touchdown to go up 28-17. "This is great," we all thought. "We have the momentum. Let's keep it rolling."

But what Nebraska fans didn't know in those few seconds of happiness is that we were in the middle of our worst fear: Scott Frost making an in-game coaching decision. Instead of kicking off and making Northwestern earn their way back in the game, we gifted them a way back on a silver platter with a failed onside kick. No, this isn't Madden. Scott Frost really called a "gotcha" onside kick with nine minutes left in the third quarter that set up the Wildcats at Nebraska's 44-yard line. Five plays later, Northwestern scored a touchdown to cut the lead to 28-24. The momentum hopped on a flight back to Lincoln as running back Cam Porter crossed the goal line.

You can guess what happened next. Nebraska, a team who has little to no winning experience under Frost, faltered and Northwestern ended up winning the game 31-28. Being the marquee game of Week 0, college football fans all over the country couldn't comprehend the onside kick call.

That Nebraska onside kick might legitimately be the stupidest decision I?ve ever seen in a football game.

Onside kick because the Nebraska coaches are drinking the free beer just like the fans are.

Even former Husker running back Ameer Abdullah chimed in.

Man I?m typically closed mouth on my opinions on coaching, but that?s just poor complimentary football, you have to play the field position there. Regardless if we even recover that ball, it?s a horrible call. No way you can think you?re closing a game out in the 3rd quarter. https://t.co/ayr0Ge2qGE

For Nebraska Cornusker fans, it was nothing new. It was the cruel reality we drowned out with Kool-Aid over the past nine months. Frost unsurprisingly said he regretted the decision in his post-game press conference.

"I made that call, so it's on me," Frost said, per ESPN. "At that point in the game, I felt all the momentum was on our side. I thought if we [recovered] it, we could win the game. ... I felt like maybe we were the better team. You can't really foresee them scoring 14 straight and us sputtering after we played well to start the second half on offense.

"Those are excuses. If I had it over, I wouldn't have made the call."

Hindsight is a beautiful thing. What does this familiar loss mean for Scott Frost's future, though? 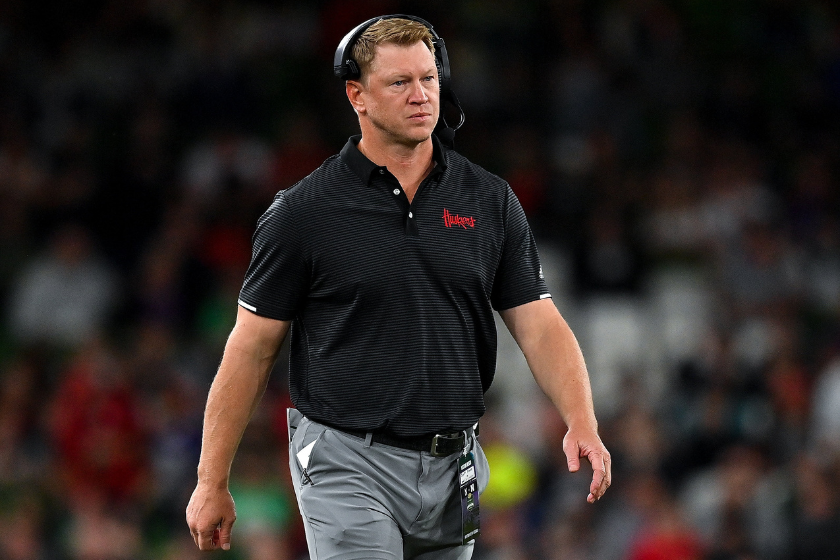 Now, can you boil a loss down to one play? No. Northwestern quarterback Ryan Hilinski picked apart Nebraska's defense, Nebraska couldn't stop the run and the Husker offensive line couldn't get a push. But, the onside kick call wasn't great!

So, the loss is Nebraska's ninth straight single-digit defeat and all but one of those losses (Ohio State last year) were by one score or less, bringing Frost's record in Lincoln to an unbelievable 15-30. Yes, a coach who has only won a third of his games still has a job in year five. That wouldn't be the case if this wasn't Scott Frost, and he wasn't coaching at his alma mater. Some fans were even calling for him to get "tarmac'd", a term made popular by Lane Kiffin getting fired by USC at an airport in 2013.

However, Frost's leash extends to the fingertips of Nebraska athletic director Trev Alberts. His margin for error is as small as the margin for success on the onside kick. Before the season, he would've kept his job by making a bowl. That might not be the case anymore and, frankly, the only gimme wins are against North Dakota and Georgia Southern. And I'm not even 100-percent confident about those! Who knows what could go wrong?

For Frost to keep his job, he needs to make some noise in the Big Ten. He needs to beat the likes of Wisconsin, Minnesota, Purdue and Iowa. The days of guaranteed conference wins are long gone. WE are the guaranteed win for other teams. I don't see him being retained without getting at least six wins with a couple of those coming against the aforementioned teams. Even then, I don't even know if fans will want to keep him around.

That feat will be much tougher than it sounds. If you need any evidence on what other teams think of Nebraska, take a look at this past weekend. Northwestern head coach Pat Fitzgerald played it as conservatively as possible late in the game because he knew that's all he needed to do. He knew Nebraska would beat themselves, and look what happened! The broadcast team even commended him for it.

Another storyline that will be telling of Scott Frost's coaching is how Adrian Martinez performs at Kansas State. Martinez was a stud when he first arrived on campus, but regressed over time. He couldn't stay healthy and progressively lost the confidence that made him a dynamic playmaker as a freshman. That being said, he still had his moments as an upperclassman despite having trouble taking care of the ball. My prediction is he has a great year for K-State and puts them in a position to compete for a Big 12 title -- some extra salt in the wound.

It's crazy to think a season is over after the first game, but that's the sentiment I feel around the Nebraska football team. Fans are finding excuses NOT to watch the game because we know we're setting ourselves up for disappointment. Who knows, there's a lot of football to be played. Maybe Scott Frost will make me eat crow and turn it around. I'm not getting my hopes up.