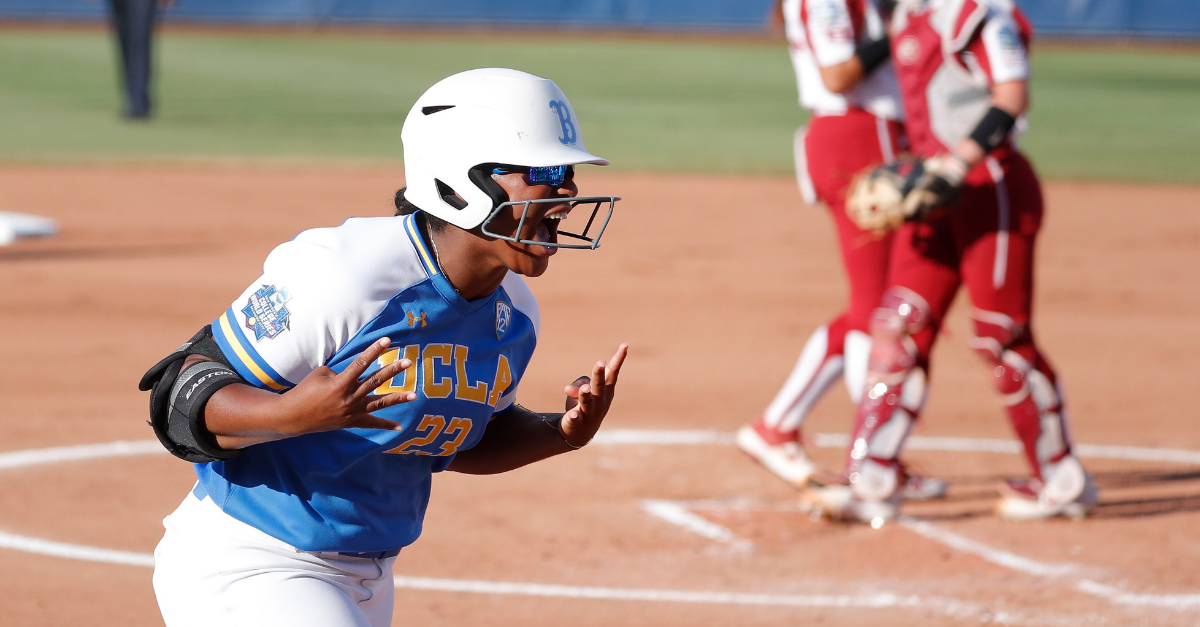 OKLAHOMA CITY (AP) ? After rolling past Oklahoma in record fashion, the Bruins now have to forget about it.

Rachel Garcia hit a two-run homer and gave up one run in five innings, and UCLA routed Oklahoma 16-3 on Monday night to take a 1-0 lead in the best-of-three championship series. The Bruins matched the Women’s College World Series single-game record for runs scored and earned the largest margin of victory ever for a championship series game since the three-game format started in 2005.

“Tomorrow is a completely different game,” Kinsley Washington, who went 4 for 4 and scored three times for UCLA, said. “This past game we just played has nothing to do with tomorrow’s game. We need to keep that mindset.”

Garcia, who threw 179 pitches on Sunday to earn the win against Washington, threw just 61 on Monday and rested the final two innings.

“Being able to have the ability to score the runs and not have Rachel be in the whole game was an ideal plan,” UCLA coach Kelly Inouye-Perez said. “It’s huge. A lot of things came together tonight.”

A day after hitting a dramatic walk-off homer, Garcia cranked one of UCLA’s four home runs against Oklahoma. The Bruins cranked out 16 hits against the Sooners, who entered the night leading the nation in earned run average.

“First, I have to give absolute credit to UCLA,” Oklahoma coach Patty Gasso said. “They cleaned our clocks. There’s no tiptoeing around it. That’s the bottom line. There’s nothing in our game that worked tonight. It’s very atypical of this team.”

Oklahoma (57-5) can still win its third title in four years with victories on Tuesday and Wednesday. Gasso expects that her team will learn from what happened on Monday.

“This game absolutely does not define us or our season,” she said. “This team is very resilient and that’s what we were trying to get out of the worst game we’ve played all season, on the biggest stage. Unfortunately, it happened that way. But it does not define who we are.”

UCLA’s Aaliyah Jordan hit a solo homer in the top of the first inning to open the scoring. Oklahoma’s Shay Knighten answered with a solo shot in the second.

With UCLA up 3-1 in the third, Oklahoma got two on with two outs when Jocelyn Alo drove one deep to right field that was caught near the warning track for the third out.

The Bruins scored again in the fourth when Washington doubled to score Colleen Sullivan, and in the fifth when Taylor Pack singled to knock Bubba Nickles in.

Grace Green hit a solo homer for Oklahoma in the bottom of the sixth to make it 11-2, but UCLA scored five more in the seventh.

It was a disappointing showing for the Sooners just 25 miles from campus.

“I told them not to read what people are going to be saying about us,” Gasso said. “Don’t get caught up into that. I think the thing that hurt them the most is feeling like they disappointed our fans.”