By the time Tennessee pitcher Ashley Rogers took a step back, rocked her hips forward and uncorked a pitch in the circle, Jocelyn Alo had already begun the process of taking off her gear and heading to first base.

It was an all-too-familiar feeling for the former Oklahoma Sooners superstar slugger, who became college softball's home run queen last season when she surpassed Lauren Chamberlain's 95 career home runs and finished with an unheard-of 122 long balls, setting an NCAA record.

NCAA softball's dinger queen was undoubtedly the greatest female athlete in the country this year for the way she dominated her opponents, which is why she was the obvious choice for our best female athlete pick. 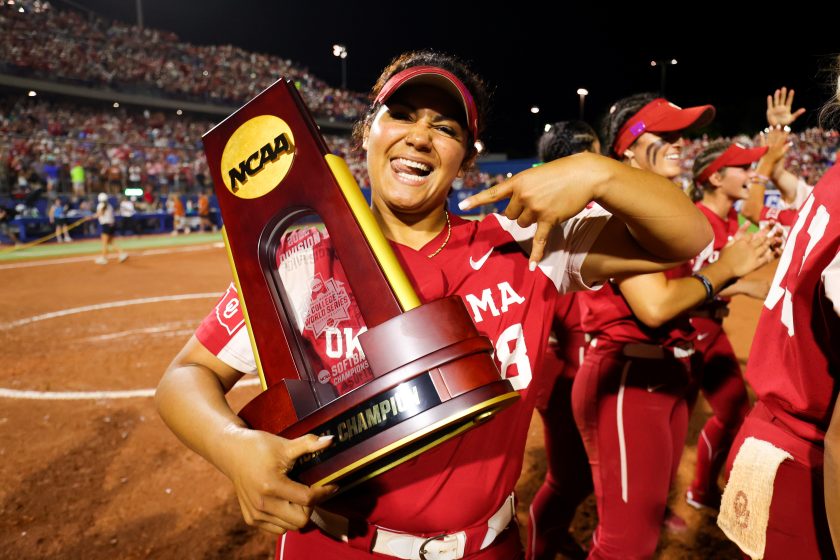 The Hauula, Hawaii native led the Sooners to one of the greatest seasons ever -- a 59-3 mark that began on a Division I record 38-0 run. It was capped by a national championship, one that was captured in convincing fashion: the Sooners blew out Texas 16-1 and 10-5 in the Women's College World Series finals, leaving zero doubt who the best team in the country (and maybe ever) was. Oh, and the MVP of the tournament after hitting five home runs? I'll let you guess.

Yes, Alo had incredible teammates like 2022 breakout star Jordy Bahl, Tiare Jennings and Jayda Coleman. But Alo was always the engine behind this juggernaut.

She was the first player in NCAA history to hit 30 home runs and bat .500 in the same season, finishing with a .512 average. She also finished her senior season holding the NCAA all-time records for home runs (122), slugging percentage (.987) and total bases (761), en route to winning just about every award possible. Not even Babe Ruth could come back from the dead and do what Alo did last season.

Numbers aside, Alo's performance last season helped push the sport of softball forward. The WCWS is now one of the NCAA's most-watched events, and players like Alo are a big reason why. Oklahoma's national title-clinching win against Texas peaked at 2.1 million viewers, according to ESPN, while the Men's College World Series highest-rated game between Ole Miss and Oklahoma peaked at 1.9 million. Everyone tuned in to witness greatness.

Alo was so scary during her 2022 campaign that pitchers like Rogers were afraid to pitch to her. Nobody wanted to be the one that served up the record-breaking home run, and yet there was no way it could be avoided.

Dropping your bat and flipping your arm band before the pitcher throws the ball is so goddamn cool. Jocelyn Alo is such a badass. pic.twitter.com/6TXUCCx4o6

On Feb. 19, 2022, Alo crushed four home runs -- two against McNeese and two against Houston. The next day, she hit one against Texas State, tying her for the all-time home run record.

She went homerless over the next six games and was walked a whopping 15 times (two of which were "intentional," though some would argue some of her other walks were too) over that span. Against Tennessee alone, she was walked four times. At one point during that home run drought, she was walked 21 times over a 12-game span.

She tossed her bat before the pitcher even released the ball ? pic.twitter.com/T1YqJD38aW

Pitchers respected the heck out of Alo, but they also didn't wanna be the one to give up the monumental home run.

Oklahoma head coach Patty Gasso even chimed in to say it was frustrating to watch:

"There's frustration because she's been waiting to swing for a while," Gasso said.

Swing she has, ever since she was a freshman.

Alo has put up some of the more incredible offensive seasons in NCAA history.

As a freshman in 2018, she hit .420 and walloped 30 homers, tying the NCAA Division I single-season freshman record and leading the nation.

In 2021, she was undoubtedly the best player in the sport, winning the 2021 USA Softball Collegiate Player of the Year after hitting .475 and 34 home runs. Think about this: she hit a home run in 32 of Oklahoma's 60 games. Oh, and she hit four in the Women's College World Series to help the Sooners become national champions. Then in 2022, she matched that season total and hit five dingers in the WCWS. Talk about consistency.

After Alo propelled the Sooners to a championship, she was drafted first overall in the inaugural Women's Professional Fastpitch draft by the Smash It Sports Vipers. She signed with the team in June 2022 but was fittingly traded to the Oklahoma City Spark and signed a three-year deal there, where she should only continue growing the professional sport. There might not be a better choice to do so.