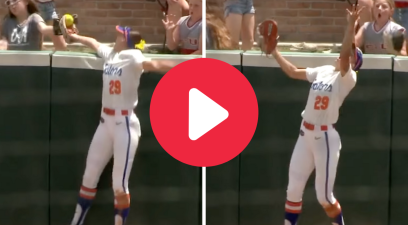 College softball fans are going to want to keep outfielder Sydney Chambley’s name on their radars. The freshman plays for the Georgia Bulldogs and she is already showing that she more than belongs at the Division I level.

Chambley was a star hitter and pitcher for Mount Paran Christian High School (Kennesaw, Ga.) before joining the Dawgs. She posted video game-like numbers there; as a freshman, she hit over .600 and struck out an incredible 214 batters. This kind of dual-threat player doesn’t come around very often.

The UGA softball team is trying to reach the NCAA Women’s College World Series for the fifth time in school history, and Chambley is doing all she can to make sure that happens.

Chambley’s statistics for the University of Georgia softball team speak for themselves already.

She started her career on a torrid pace, homering and driving in six runs in her first two collegiate games against South Alabama and Longwood. The power heroics continued against Kent State just a few games later, when Chambley hit two more out of the park.

Sydney Chambley gives the Dawgs a nice insurance run in the sixth with her sixth home run of the season!

Through her first 26 games and 75 at-bats, Chambley totaled seven home runs and nearly 20 RBI. She is clearly comfortable in Athens and at Jack Turner Stadium. she does nothing but light up the box score nearly every game.

Plus, she can field her position pretty darn well:

Missouri gets on back in the fourth but Avant and the defense limit the Tigers to one as the inning ends on another great play from Chambley!

The Bulldogs have put together some memorable moments in 2021, including multiple walk-off victories. In addition to Chambley, fellow freshman Jayda Kearney has looked impressive to start her career. The Southeastern Conference is full of great teams like Arkansas, Florida, Alabama, and Texas A&M. Georgia’s team is hoping players like Chambley will ensure that they have a fighting chance every single year.

Sydney Chambley is a legitimate power threat in the heart of Georgia’s lineup. The great thing for Bulldogs fans is that she still has three years to get even better.