“Blizzard World” is available to play now on the Overwatch PTR 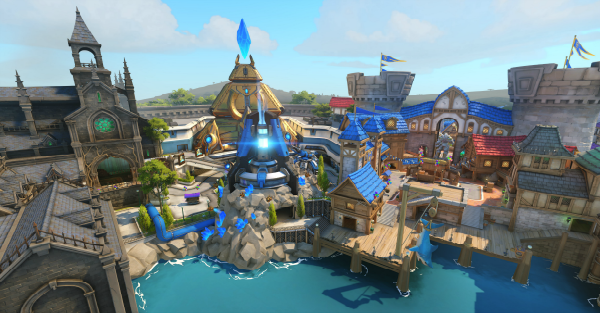 While it may not have earned quite the same level of attention that Blizzard’s announcement of World of Warcraft: Classic did, Overwatch generated its own excitement at this year’s annual BlizzCon. The villainous, Irish-born character Moira made her debut as the game’s 26th playable hero, while the reveal of the amusingly-named “Blizzard World” map promised of yet another setting for players to do battle in.

RELATED: Monday Recap: Everything that happened at this year’s BlizzCon

Moira may have reached live servers last week, but Blizzard World itself has eluded players until quite recently. According to a recent post over the game’s website, Overwatch’s latest map is now playable over the Public Test Realm (PTR) for PC users.

The setting is described as “an amusement park celebrating the universes of Warcraft, StarCraft, and Diablo,” and will fill the role of a hybrid Assault/Escort map. If you haven’t seen it already, check out the trailer for Blizzard World below:

Other changes in the latest PTR patch include a number of fixes regarding visual bugs for some of the Overwatch heroes’ skins. Doomfist’s Seismic Slam, for example, will no longer cause performance drops when used with no cooldown, and Moira’s Biotic Orb shouldn’t take the appearance of her Biotic Grasp’s healing spray effects. Sound effects should now also play appropriately when navigating the Options menu with a controller, too, while Ana’s ammo clips will now remained attached when wearing the Captain Amari skin.

As is usually the case with Blizzard’s test servers, the PTR is only accessible for Windows PC users from eligible regions (specifically: anywhere but China). Progress on the PTR isn’t kept between servers, either, meaning that players who obtain ranks or cosmetic rewards will not retain them when returning to live Overwatch.

To download the PTR, simply navigate to the Overwatch tab of the Battle.net desktop app, select “PTR: Overwatch” from the REGION/ACCOUNT drop-down menu, and select “Install.”

For more information Blizzard’s latest PTR patch, check out the full summary below, or read through the developer post on the official blog.