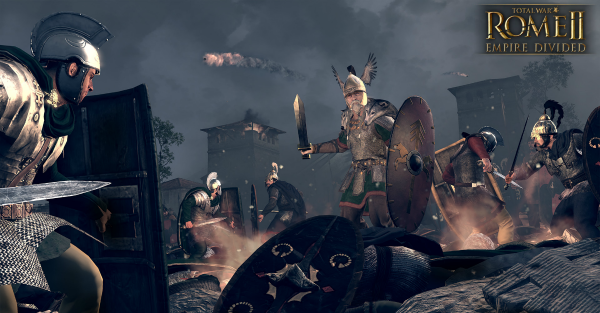 If you’ve been following the news on the Total War franchise lately, then you’ve probably heard by now that the studio’s got a lot in development. Following the immense success of its Warhammer series, Creative Assembly (CA) would recently reveal that three separate titles are currently in development: the first installment of the Saga franchise, a full title set in a historical era, and an expansion to a previously released game. Just yesterday CA announced over Twitter that this last title would be an expansion for the 2013 sequel, Total War: Rome II – and today, the studio revealed its name: Empire Divided.

Click here to view the Steam page and get further information: https://t.co/XBklqQcq0C pic.twitter.com/S4G269dgN0

Total War: Rome II – Empire Divided visits once again the ancient Roman Empire on the brink of collapse. Greedy barbarian tribes to the north combined with the hostile Sassanids to the East represent a culmination of threats eager to capitalize on the Empire’s weakness, itself brought on by “inept emperors and usurpers vying for power.” To save Rome, the player will have to fend off these threats for as long as possible – but time is not on their side.

Features in Empire Divided include:

A separate Q&A on CA’s website elaborated on these Heroic Factions, which seem to have taken inspiration from some of the newer races in the Warhammer series; not only do they have to fulfill specific conditions in order to “win” the campaign, but their leaders are reduced to a “wounded” state when slain in battle and can be re-recruited later on. “These create rich, narratively-focused campaigns to build your empires around.”

Alongside the expansion will also be the “Power & Politics” update, an overhaul designed to completely revamp Rome II’s politics system to bring it up to speed with the studio’s more modern titles. According to the Q&A, the intent behind this update is to “give a far greater meaning” to how politics shapes the campaign, as well as how the player can affect it. Political influence can now be gained by completing missions and securing battle victories, and can then be used to increase the faction’s control over its own territory.

Total War: Rome II – Empire Divided launches later this month on November 30 for $16.99. The Power & Politics update, meanwhile, will arrive on the same day as a free update for all owners of Rome II. For more information on either of these developments, check out the full summary of patch notes over the Total War website.