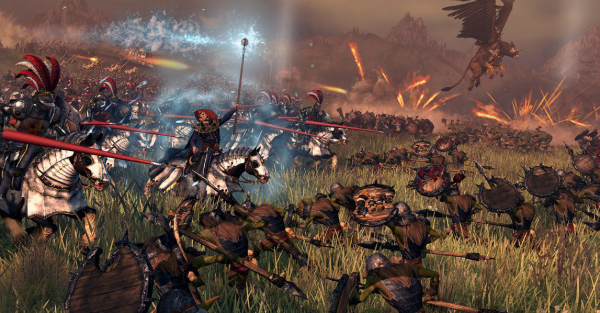 Shortly after Total War: Warhammer launched in 2016, the developers over at Creative Assembly (CA) unveiled a roadmap for all of the game’s future content. The announcement detailed additional factions, upcoming legendary lords, and a wealth of free updates that would roll out steadily over the next year. Today, CA just revealed the final installment of this campaign; for the studio’s 30th anniversary, players will receive 30 free “Regiments of Renown” for Warhammer. Check it out:

These units have actually existed in the game for some time now, albeit in a different form; Regiments of Renown were initially released as an optional DLC that added a host of new troops to the game’s default factions. By purchasing The Grim and the Grave, players could instantly recruit high-tier, lore-specific units to their armies. To balance the strength of these troops, they aren’t actually able to rank up, and can be outclassed by experienced, default troops in the late game.

Despite this handicap, the DLC is arguably one of the least-popular releases for Warhammer. The units gave an undeniable advantage to players on the campaign map who owned the pack, and those who didn’t were still subject to AI factions utilizing the instantly-obtainable units on the battlefield.

This commonly-held criticism probably had a lot to do CA’s decision to release more Regiments of Renown for free for all of Total War: Warhammer’s other factions. This final free DLC will do a lot for balancing out the campaign by adding these special units to the Wood Elves, Beastmen, Warriors of Chaos, Bretonnians, and even the upcoming Norsca race.

RELTAED: Winter has come to Total War, and with it a new faction has arrived

The new Regiments of Renown will be available for Total War: Warhammer on August 10, when it will launch alongside the Norsca DLC. Players will be able to access the units by signing up for Total War Access on the series’ website.