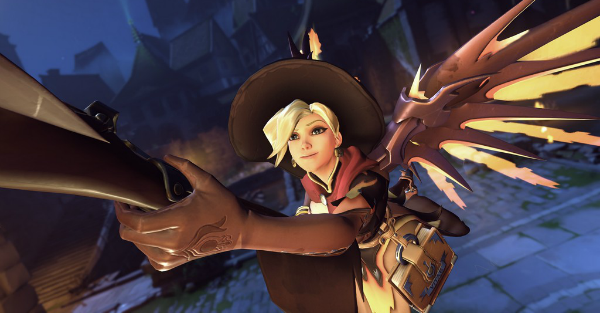 We could probably create our own category for Mercy alone after all the changes Overwatch’s angel-themed hero has undergone in recent weeks, and for good reason. Blizzard’s recent updates to Mercy may have been intended to bring the character’s effectiveness back in line with the other healers, but the reality was anything but. According to a report by OmnicMeta, Mercy quickly rose in popularity following the changes, resulting in a near 100% pick rate across all competitive games and a healing efficiency 50% higher than any other hero.

After nearly two weeks of complaints regarding Mercy’s increased role in Overwatch competitive play, Blizzard is seeking to address its blunder with another series of changes. For starters, Mercy’s “Guardian Angel” ability received somewhat of a nerf; the cooldown no longer resets immediately following usage of “Resurrect,” meaning that players can no longer dart in to revive a teammate and immediately escape danger by flying back to another, safer position. To make up for this, Guardian Angel now allows for a bit more freedom of movement by introducing the ability to glide past targeted allies by hitting the jump button.

More noteworthy, however, is the change to “Valkyrie” – a newer ability introduced last patch that allows Mercy unlimited flight capabilities, increased survivability and healing, and a reduced cooldown to Resurrect. Now, Mercy’s ultimate no longer affects the cooldown to Resurrect, which previously allowed for players to quickly chain two revivals upon activating the ability. The developers explained this change in the following comment:

Valkyrie no longer resets or reduces Resurrect’s cooldown. Instead, it now provides an extra ‘charge,’ allowing you to revive an ally even if it is still on cooldown. If the bonus charge hasn’t been spent when Valkyrie ends, it will be removed.

This method makes Resurrect more flexible when used with Valkyrie. For example, in the past if you wanted to resurrect two teammates, you had to revive the first target, then activate Valkyrie (causing the Resurrect’s cooldown to reset), and then revive the other target. With this change, you can now activate Valkyrie and fly in quickly to resurrect both targets instantly.

However, this still reduces the overall number of Resurrects that Mercy can provide, since Valkyrie no longer reduces its cooldown.

While only time will tell us how effective these changes will be, players can at the very least expect Mercy’s effectiveness to be somewhat reduced. That said, Resurrect is still an extremely powerful ability in that it allows the enemy team to negate one death every 30 seconds, and Mercy will likely remain a popular pick unless that ability is either significantly nerfed or the other healers are brought up to scratch.

Other changes to Overwatch include an increased speed boost to Lúcio’s wall ride, which now grants players a boost of 65% and should (hopefully) contribute to the aforementioned increased viability of the character. There’s also a mildly interesting note near the bottom about Zenyatta’s new cultist skin. A number of extra voicelines have been added for the outfit, which has proven to be one of the more popular additions during this year’s Overwatch Halloween event.

For a full summary of the patch, check out the full post on the Overwatch website. Feel free to follow the developers on Twitter for instant updates about any news related to the game, or browse our selection of previous articles, which have covered everything from the competitive eSports scene to rumors regarding new characters.