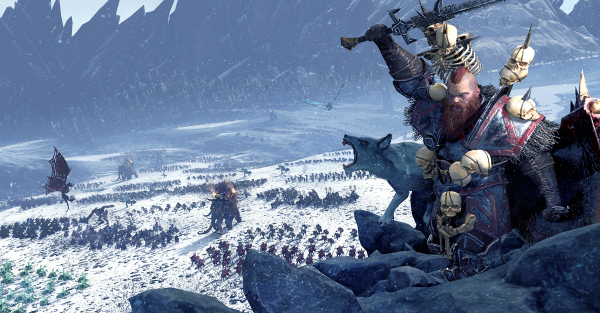 A chill has settled in the hearts of the inhabitants of the Old World. The long-adversarial Norscan tribes of the far north will soon be playable, thanks to the efforts of the developers at Creative Assembly, and the many factions of the south will have to band together if they hope to survive the impending onslaught of invading marauders.

RELATED: Winter has come to Total War, and with it a new faction has arrived

In anticipation of this upcoming race pack, CA just released yet another trailer showcasing the faction. This one follows the efforts of the enormous ice troll Throgg as he attempts to subjugate the other Norscan tribes. Take a look:

There’s quite a lot going on in this trailer; the mechanics of Norsca naturally differ greatly from the other factions of Total War: Warhammer, and even the narrator seems to struggle with remembering all of the details at times.

For starters, let’s talk about the King of the Trolls: Throgg. Born with an unnatural intelligence that manifests itself in a cunning, murderous character, Throgg is gifted both with the perks of being a troll – such as the ability to project acidic vomit over his foes – and the abilities that go hand-in-hand with leadership. Ice trolls following Throgg’s banner can be gifted with superior stats in their defensive and offensive capabilities, should the player invest skill points in that direction, and are less likely to break formation and flee while under the Troll King’s banner.

Unsurprisingly, the Norscan tribes are heavily dependent on sacking and raiding in order to generate income. As a result, their armies are able to enter raiding stance even with no movement points remaining. Similarly, players who capture settlements have extra options to deal with them; they can follow the natural routes of occupying and sacking, or they can raze it and erect one of four totems over the ruins.

These monolithic structures provide points toward one of four gods, with each god providing a unique bonus to their loyal champion. A player who devotes himself to the Hound, for example, will gain increased unit experience and access to a unique, as-of-yet unspecified unit, while followers of the Crow can bring a plague (to which their armies are immune) down upon the Old World.

The most interesting detail for me however came when Throgg finally tracked down and defeated Wulfrik the Wanderer in one of the latter’s settlements. Although the battle wasn’t shown, we know that Wulfrik suffered a bitter defeat at the hands of the Troll King. His loss was so shameful, in fact, that Wulfrik was unable to refuse a confederation request from the player, and the Norsca faction was quickly absorbed into the dominion of Throgg.

This is noteworthy if for no other reason than the fact that players will be able to reach a succinct point from which they can confederate with members of their race. Previously, such an objective was vague and frequently frustrating, as the AI never seemed to specify why they would refuse the request.