We finally know why Ronda Rousey hasn’t fought this year, and it makes complete sense 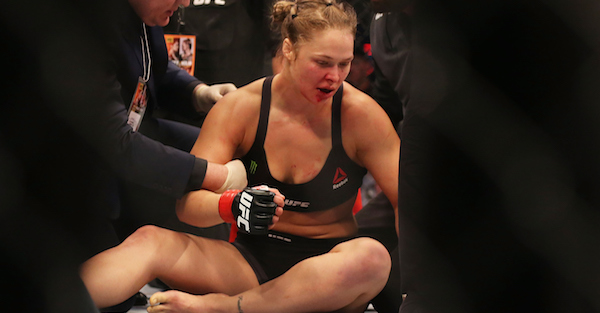 Quinn Rooney/Getty Images
MELBOURNE, AUSTRALIA - NOVEMBER 15: Ronda Rousey of the United States receives medical treatment after being defeated by Holly Holm of the United States in their UFC women's bantamweight championship bout during the UFC 193 event at Etihad Stadium on November 15, 2015 in Melbourne, Australia. (Photo by Quinn Rooney/Getty Images)

When Ronda Rousey lost to Holly Holm in UFC 193, it was easy to wonder when we would see the dominant Rousey return to the octagon.

RELATED: Report: We have a date for Ronda Rousey’s “most likely” return to UFC

Ten months later, Rousey has yet to step foot into the octagon and now we may finally have the reason for her absence.

On Colin Cowherd’s “The Herd,” UFC president Dana White clarified the reason behind Ronda’s sabbatical, blaming it on “minor surgeries” sustained during her bout with Holm.

?Ronda had a bunch of minor surgeries and they?re healing up and when they are, I?m assuming she?s going to fight,? White said.

We all knew Holm had demolished Rousey like no other, causing her to be placed on a six-month medical suspension by UFC after the fight, but the fact that she’s had surgeries after she would have been cleared shows just how injured she truly was.

Rousey’s possible return to UFC has been marked as Dec. 30 against current bantamweight champion Amanda Nunes.