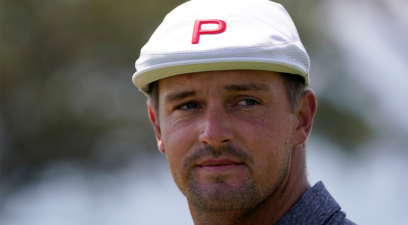 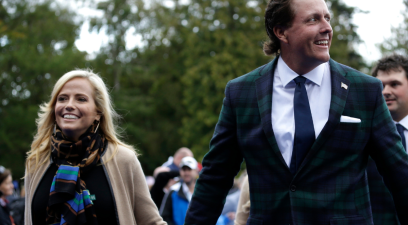 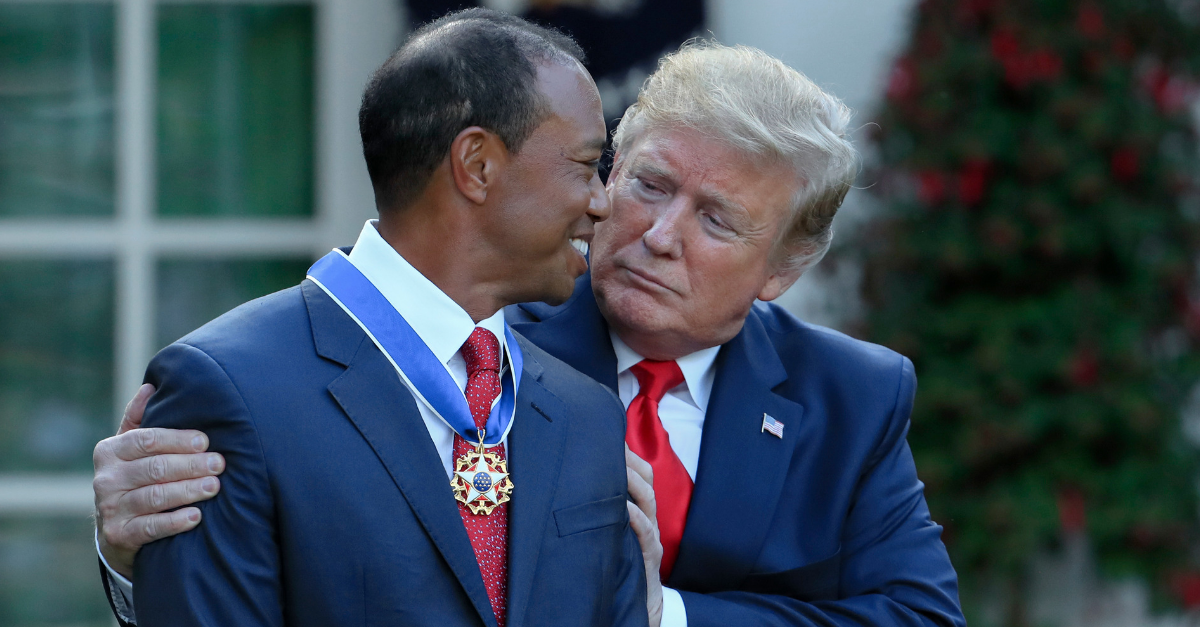 WASHINGTON (AP) — President Donald Trump awarded golfer Tiger Woods the nation’s highest civilian honor on Monday, describing the 43-year-old as a “true legend” who transformed golf and then fought through years of injury to return to the sport’s summit.

Trump awarded Woods with the Presidential Medal of Freedom. He’s the fourth golfer to earn that distinction and certainly the youngest. While Woods dominated the sport for more than a decade, he won his first major in nearly 11 years at last month’s Masters Tournament, a comeback that captivated the sporting world.

“Tiger was back on top,” Trump declared during the Rose Garden ceremony.

It’s an incredible privilege to be awarded the Presidential Medal of Freedom. Considering the recipients, history, and what this means to me and my family, it’s also very humbling. Thank you all for your support and I hope this inspires others to never give up on their dreams. pic.twitter.com/33CJIHwQvz

RELATED: Tiger Woods Was All Class When Asked About Donald Trump

If there were a Mount Rushmore for golfers, Woods would almost certainly be on it. He ranks second in PGA Tour wins and in major tournament victories. But the president’s decision to award the nation’s highest civilian honor to Woods also raised scrutiny about whether the president should be boosting the profile of a business associate of The Trump Organization.

Trump understood the importance of Woods comeback to golf and its fans, tweeting shortly after the Masters win that he was awarding Woods the medal because of his “incredible Success & Comeback in Sports (Golf) and, more importantly, LIFE.”

Trump has been using Woods’ cachet to attract fans to his properties for decades. Trump got Woods to show up at his Taj Mahal casino in Atlantic City, New Jersey, a day after the golfer’s first Masters victory in 1997. The place was mobbed. Two thousand fans showed up as Woods walked down a 320-foot red carpet, some of them storming steel barricades to get a closer look.

Pres. Trump called golfer Tiger Woods "a global symbol of American excellence, devotion and drive" before presenting him with the Presidential Medal of Freedom to Tiger Woods in a ceremony in the White House Rose Garden. https://t.co/r2dYZ8bBW3 pic.twitter.com/T0v7E65Zvo

Golfers at Trump’s club in Doral, Florida, can stay at the Tiger Woods Villa. At a ribbon cutting ceremony in 2014, Woods lavished praise on the future presidential candidate, calling changes he made to the club “phenomenal.”

In Dubai, Woods designed an 18-hole course to be managed by The Trump Organization.

Ethics officials have criticized Trump for not selling off his assets completely and holding the money in a blind trust. Instead, he set up a trust to hold his assets, handed day-to-day management responsibilities to two sons and hired an ethics lawyer to vet business deals. Trump can draw money from the trust and can benefit if his properties increase in value.

“You have to ask whether it’s his true belief Tiger Woods deserves this award or whether he’s doing it to help his business,” said Jordan Libowitz, communications director at Citizens for Responsibility and Ethics in Washington, a left-leaning public policy group.

Christopher Devine, an associate professor of political science at the University of Dayton, said Trump may have a business angle, but when he stacks up Woods’ accomplishments against other recipients, he believes Woods deserves it.

“If President Obama or Hillary Clinton had given the award to Tiger, no one would have batted an eye,” said Devine, who has studied the history of the award, established in 1963.

President George W. Bush presented the Medal of Freedom to Arnold Palmer and Jack Nicklaus. Obama presented it to Charlie Sifford, sometimes referred to as the “Jackie Robinson of golf.” Woods noted that he named his son after Sifford. “He was like the grandpa I never had,” Woods recalled.

Devine also noted that previous presidents have presented the award to supporters and political donors. For example, Obama awarded the Medal of Freedom to Bruce Springsteen, who performed in concerts to support Obama’s election efforts. He also awarded it to his vice president, Joe Biden.

"It's my privilege to award our nation's highest civilian honor to one of the greatest athletes in the history of sports," President Trump said on Monday, introducing golfer Tiger Woods pic.twitter.com/e9nZvCizBx

Woods became emotional as he spoke of his parents, and he thanked those who have supported him over the years, saying, “You’ve seen the good and bad, the highs and lows, and I would not be in this position without all of your help.”

The Presidential Medal of Freedom is given to individuals who have made “especially meritorious contributions to the security or national interests of the United States, to world peace, or to cultural or other significant public or private endeavors,” according to the White House. Presidents have complete discretion over whom they honor with the medal.

Some athletes and sports champions have resisted visiting the Trump White House because of their differences with the president.

Rick Reilly, who wrote a book about Trump’s golfing entitled “Commander in Cheat,” said Woods has brought golf to people of color all over the world, while Trump has promoted it as a sport for the rich. He said Woods has not been one to take stands on political issues, but should have declined the award in this case.

“I can see how it would be hard to resist, but I still think it’s hypocritical to do it,” Reilly said.

READ MORE: Remember When 5-Year-Old Tiger Woods Was on This ’80s TV Show?