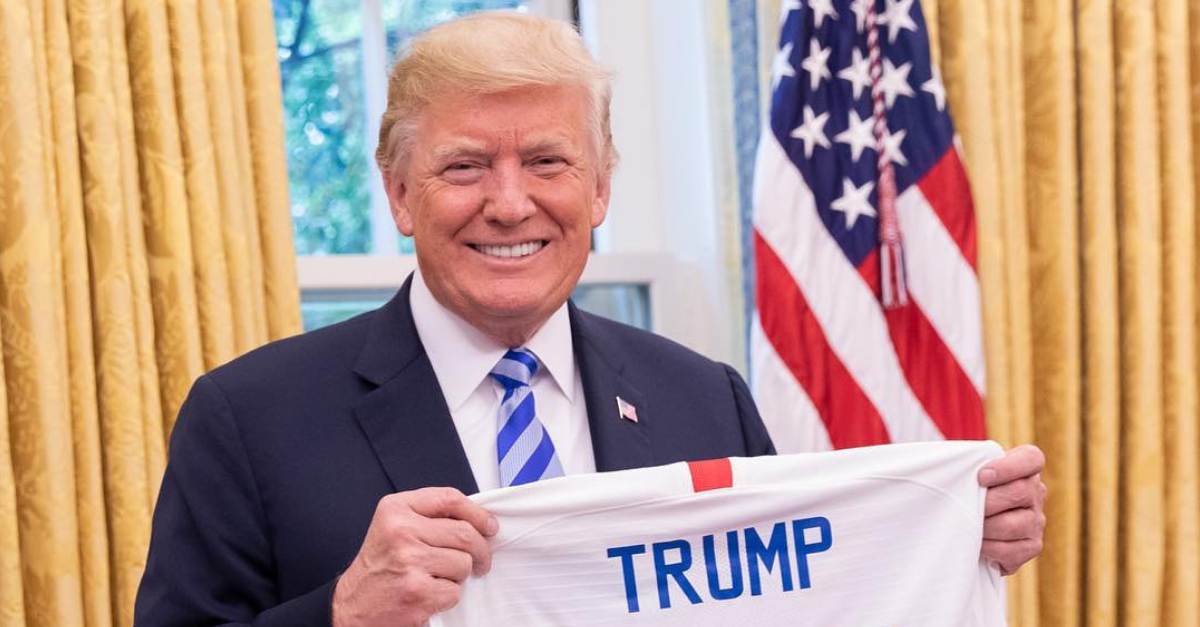 Sports jersey collections are the pride and joy of so many hardcore fans. Wearing their favorite player’s likeness on game day, and keeping it long after they’re gone, holds a special place in many closets. However, during a time where national anthem protests don’t seem to go away, a huge contingent of fans have turned away from the National Football League. Now, the opportunity to support America, and pretend like America actually has a national football team, has finally arrived.

The same popular online Trump website that produces the iconic red “Make American Great Again” hats worn by President Donald Trump himself, as well as thousands of people across the country, has added a new article of clothing to their website. Available for $99 a pop, you can be the proud of owner of a “Stand Up for America” football jersey.

Available in both men’s and women’s sizes up to 3XL, the red, white and blue jerseys are embroidered with “Stand Up For America” on the front, labeled with the No. 45, which signifies the number of Trump’s presidency, and of course, tagged with “TRUMP” on the nameplate.

Of course, they are “proudly made in the USA” and emblazoned on the sleeve with an American flag.

According to Fox News, the jerseys first went on sale on September 7, just in time for the kickoff of the NFL season and just two days after the unveiling of the Nike ad campaign lead by former NFL quarterback Colin Kaepernick.

?Our theme originated out of President Trump?s love for the American flag and his fervent belief that Americans should always stand for our National Anthem.? — Lara Trump, Senior Advisor for Donald J. Trump for President Inc., via Fox News

The merchandise is paid for by the Trump Make America Great Again Committee, an organization composed of Donald J. Trump for President Inc. and the Republican National Committee.

With an original anthem protestor, safety Eric Reid, back playing in the NFL as a member of the Carolina Panthers and continuing to kneel during the national anthem, the jerseys are sure to continue flying out of stock now that the protests are being put back into the spotlight.