The Eisenhower Tree: A Presidential Pain for Ike’s Golf Game There’s always that one thing that messes with a golfer’s game. Driving, chipping, putting, hitting the ball straight. Those are the things that mess with me at least.

For President Dwight D. Eisenhower, the one thing that drove him crazy was a tree.

Ike’s arch nemesis lived on the left side of the fairway of the 17th hole at Augusta National Golf Club. You’ve probably seen it before if you’ve watched The Masters Tournament. It was the huge loblolly pine that sprouted about 210 yards away from the tee box. Its branches clouded the left side of the short grass, creating a narrow corridor for the rest of the fairway.

It was once golf’s most iconic flora, but Eisenhower almost prevented history from happening by lobbying for it to be removed.

What was it about the tree that caused the 34th President of the United States so much frustration? 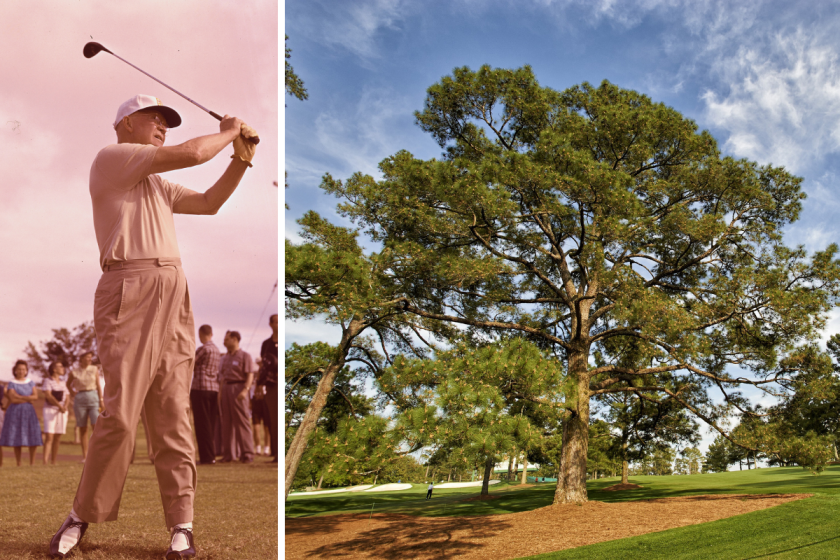 RELATED: Tiger Woods’ Son Could Be A Golf Star Like His Dad

Eisenhower became a member at Augusta in 1948. I imagine the first 16 holes of his first round were delightful. Then, as he walked up to the 17th tee box, he laid eyes on what would become his mortal enemy.

Unlike his political leanings, Ike’s golf stroke curved left. He had trouble with the tree again and again and again. So much so that the tree was dubbed “The Eisenhower Tree.”

Eisenhower’s frustrations boiled to the point where he lobbied for the tree to be removed in 1956 after it interfered with his tee shot yet again. Club Chairman Clifford Roberts ruled him out of order. He denied Eisenhower’s request while he was the sitting president by the way. Ike could sign a bill into law but he couldn’t get the bane of his golf game removed.

Thankfully, Roberts’ decision helped preserve what would become golf’s most recognizable tree. It grew in fame due to its iconic look and players having similar troubles as Eisenhower. Tommy Aaron once hit his ball into the tree and was forced to drop after he couldn’t find it. The next day, he was walking by the tree and a ball fell out. Jack Nicklaus hit the tree a lot, too, and would sometimes mumble ?Why didn?t they listen to Ike?? Tiger Woods injured himself at the 2011 Masters while hitting from the pine straw underneath the tree, but would tip his cap in the direction of the shrub each time he walked by to show respect.

Eisenhower was an Augusta National member until he died in 1969. He was 45 years away from seeing his dream come true.

In February 2014, a brutal ice storm hit northeastern Georgia and significantly damaged the tree. The damage was beyond repair and sadly, the tree was removed. A cross-section of the tree remains on display at Augusta while another now resides at the Eisenhower Presidential Library in Abilene, Kansas. It was more than 80 years old.

The famous tree is gone, but it’s not dead. Augusta kept two grafts and a seedling from the original tree in hopes of replanting it one day.

It’ll take about 50 years for the tree to fully grow. Eisenhower will turn in his grave with each new inch.

MORE: Ronald Reagan Was a Cheerleader Before Becoming President