Tiger Woods was a golf prodigy from a very young age, having started playing the sport as a toddler with his father, Earl Woods.

It seems that Woods, in turn, has passed his golf talent on to his own son Charlie Woods.

His 13-year-old son went viral on social media in 2020 after a video of his swing was shared online (with Tiger caddying). Charlie already looks like he has a long future as a golfer, boasting an incredibly impressive swing for his age. 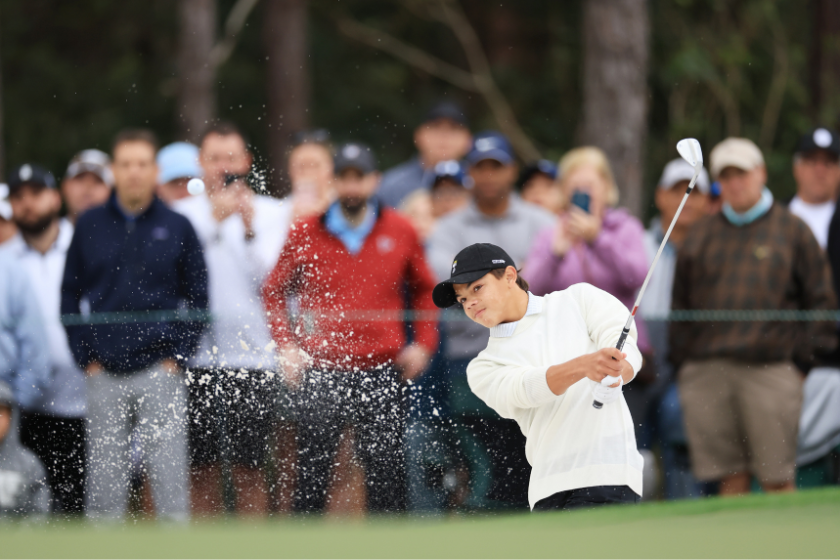 Well, fans were able to see Charlie Woods live in action on the golf course for the first time at the 2020 PNC Championship, a two-day golf tournament at the Ritz-Carlton Golf Club in Orlando, Florida. Charlie was the youngest-ever contestant at the event.

The PNC Championship, formerly known as the Father-Son Challenge, pairs each contestant (all major-winners from the PGA and LPGA Tour) with a family member. After a seventh place finish in 2020 and a second-lace finish last year, the fahter-son duo is back once again in 2022.

This will mark Woods' first tournament action since the 2022 Open Championship.

As for Charlie, well let's just say he's inherited Tiger's appetite for winning. At the 2020 Mayakoba Classic, fellow major championship winner Justin Thomas revealed Charlie has an obsession with trying to beat him, sharing the competitive edge that made Tiger so great.

If the intangibles weren't enough, Charlie's demeanor on the golf course is just like his dad as evidenced by the PGA Tour video Charlie and Tiger. Mannerisms.

Charlie mirrors his father in everything from the timing of his twirls to picking up his tee after hitting a drive. They take "like father, like son" to a whole another level.

But even with all their similarities, Tiger encouraged Charlie to model his swing after Rory McIlroy opposed to his.

"I told [Charlie], 'Don't copy my swing. Copy Rory's,'" he said. "Have you ever seen Rory off balance on a shot? No. Not ever. You can swing as hard as you want, but you need to have balance."

Which golfer does Charlie Woods? swing resemble the most? ? (?: @nb3jgnc) pic.twitter.com/Bko9hgAlxG

While Charlie is a long way off from becoming a professional, the 13-year-old has impressed at junior tournaments in Florida. And from the looks of it, Charlie has the potential to one day win the Masters in Augusta and become a major champion like his father.

Charlie Woods has been a spectator for many of his father's career victories, including wins at the U.S. Open and Open Championship. Now, he'll be looking to putt home some birdies alongside his old man as the pair look to impress again at the PNC Championship.