Look, the umpires at the Little League World Series and the regional events leading up to the Williamsport showcase are volunteers. That's terrific, but maybe Little League should reconsider that idea and pay up for umpires who know what they're doing.

One of the worst calls I've ever seen watching these games took place in the Northwest Region Championship between Oregon and Washington last night. The team from Washington was all but gifted a trip to the LLWS because of a confusing call (or non-call?) the third base umpire made on a play to end the game. The result? One team was shafted.

Washington advances to the Little League World Series because umpires say they called fair even though there was a foul ball signaled pic.twitter.com/rsFURks1Y5

Let's dive into this play from the beginning.

The Washington hitter hits a ground ball down the third base line with one out and a runner on first in the bottom of the seventh inning. The third base umpire IMMEDIATELY throws his hands up to signal it's a foul ball. Because that's his call, and he can see the line clearer than any other umpire on the field, the play should have been dead on the spot.

Instead, the runner on first kept running all the way home. The fielders clearly stopped playing because they saw the third base umpire's foul call, as one would expect them to. But according to the broadcast, it appeared the home plate umpire called a fair ball. Thus, for some reason, the official call was fair.

That led us to the most absurd image on the broadcast:

How can the call on the field be both fair and foul? Does anyone know what they're doing here?

Once the umpires reviewed whatever needed to be reviewed, they awarded Washington the run and the team advanced to the LLWS. Here's what should've happened, in my opinion: because the one umpire signaled foul and fielders stopped playing, they should've simply counted it as foul and lived with that call. If they wanted to reverse the call after replay and call it fair, then just award one base to the runner.

My rant aside, this screw-up pissed off many viewers at home. I mean, how can you not feel some type of way looking at these confused and saddened kids after that call: 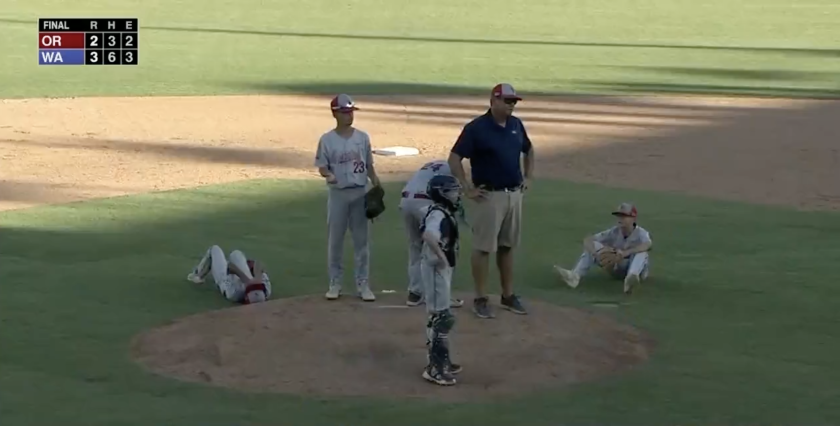 Here's what fans at home said about the call on social media:

Oregon be Washington regional #LLWS final was the worst ending to a game I?ve ever seen. Umpire puts his hands up calling a foul, defense stops playing it. Runner scores from first. Somehow it was called fair by another ump?? Run scores

LLWS Oregon vs. Washington game just ended on the worst call ever. 3rd base umpire raises both hands in the air and they called it fair ball. WOW!!

Pretty daring of you to post this so soon! Maybe put out a statement first apologizing to Bend North Little Legaue!? Definitely puts a damper on your World Series, what a shame....

Maybe it's time Little League revisit the idea of paying for competent umpires. If they don't, people will stop watching.