Moments like this don't often come about in sports, but when they do, they live for eternity. Bill Buckner's grounder behind the bag, Sid Bream's slide at home plate in the 1995 NLCS, JR Smith's boneheaded non-timeout or even UCLA's controversial exit from the 2017 Women's College World Series. These moments hang in the air for years. Which is why we're still discussing this call from 2021.

The Florida State Seminoles took down the No. 1 Oklahoma Sooners in Game 1 of the 2021  Women's College World Series Championship using some timely defense, a barrage of hits, and a very controversial play at home plate.

In the seventh inning, an obstruction call awarded a run (and an even larger lead) for FSU. The bang-bang play and decisive call made by the home plate umpire became a major talking point for both fanbases and the rest of college softball fans.

So, was obstruction really the right call?

A terrible obstruction call went against OU softball last night. What did Patty Gasso think of it? She gave a strong response. #WCWS pic.twitter.com/Gxtxuq85kA

Florida State led 7-4 in the top of the seventh inning inside Oklahoma City's Hall of Fame Stadium on Tuesday night.

?Meanwhile, FSU's Anna Shelnutt got caught in a rundown between second and third base. OU catcher Lynnsie Elam fired to second behind her. Then, Muffley sprinted home. Oklahoma Tiare Jennings quickly threw home.

Elam received the ball before Muffley slid, but was called for obstruction by home plate umpire Don Brown because she put her knee down before receiving the ball, thus blocking Muffley's path to the plate. Muffley was also injured on the play.

The call was pivotal. The Seminoles went up 8-4 and hung on to win after a Sooner rally in the bottom of the seventh.

What's interesting is that umpires missed what could have been an interference call when the FSU third base coach touched Muffley to send her back to third base on the play:

Before the obstruction. Unless you can touch the base runner. Always thought it was an out. pic.twitter.com/o6HM8NEOew

The obstruction call led to an outcry by Oklahoma fans on social media, but the NCAA stood behind the call.

NCAA Says Call Was "Made Correctly"

The NCAA stood by the umpire's obstruction call after the game.

"The runner has to be given an opportunity to reach the plate, and in this case with the knee down without the ball, that is why obstruction was charged to the catcher."

Was she blocking the entire plate? It looked to some like she gave the lower left half of the plate.

Another issue: Elam had no choice but to stand in the way of the runner because she was awaiting a throw that took her in the runner's path. She would've had to have caught the ball in front of the base path, but she didn't have time on a throw from the infield.

According to the NCAA Softball rulebook, obstruction "occurs when a defensive player, not in possession of the ball nor in the act of fielding a batted ball, impedes a batter's attempt to make contact with a pitch or impedes the progress of any runner who is legally running bases on a live ball."

The rulebook goes on to state that "defensive players must catch the ball, block the base and make the tag" rather than blocking the base before catching the ball.

It's a tricky call, and it encourages a runner to attempt to make contact to get obstruction called. Muffley could have just as easily slid slightly to her right and swiped the plate with her hand.

Oklahoma Head Coach: "It Hurt Us" 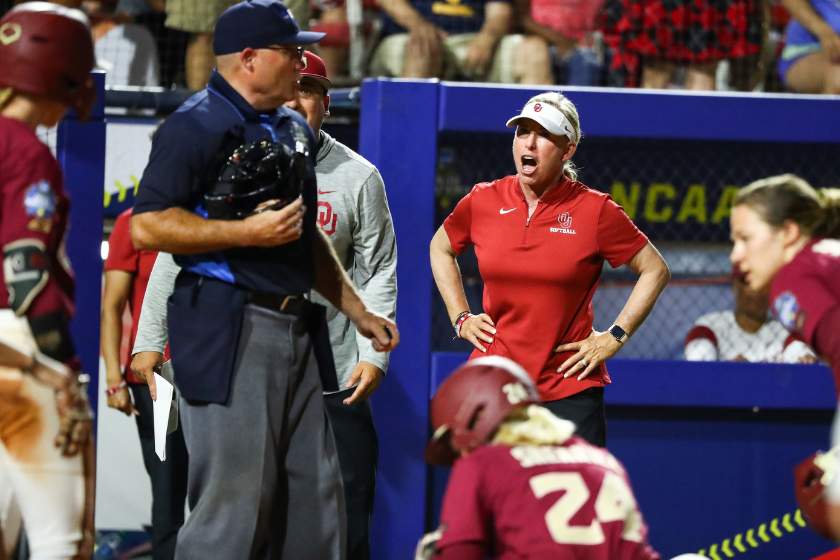 "It hurt us," Gasso said. "That call hurt us. And all I can say is that I wish that rule was looked at a little bit different because there's a lot of ways that you can look at it. And I guess I'll just leave it right there at that. I'm sorry that the young lady got hurt. That's not the intention whatsoever. But I just am going to leave it right there. It's a tough rule. It's a tough, tough rule for all teams who are trying to be aggressive and umpires are trying to do the right thing. It's something that is tough. And you just hate the fact that it's at home plate because it's going to lead to a run or cost a run, one way or the other. So it was a tough play."

The Sooners, despite back-to-back home runs and a late-game rally, ultimately fell to the Seminoles. FSU softball was then just one win away from a second national championship in the last three tournaments. 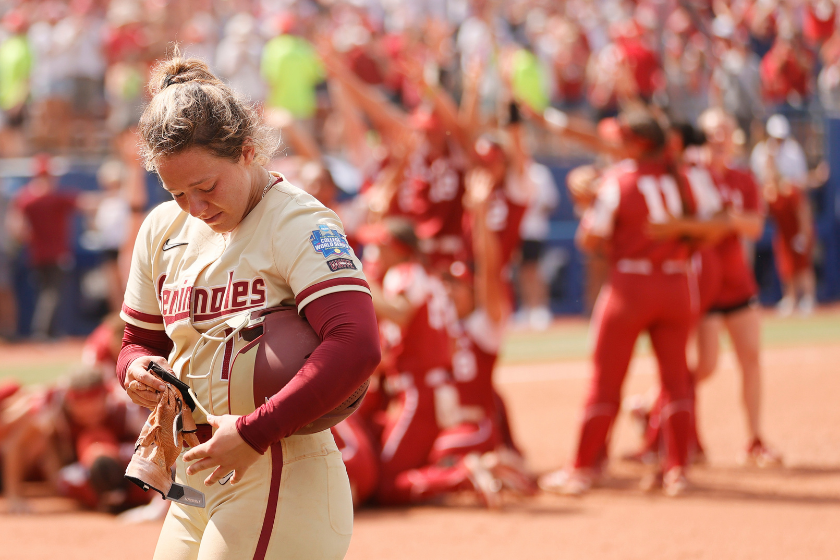 A year ago, it felt like FSU had all the momentum heading into Games 2 and 3, but that simply wasn't the case. As UCLA found out in 2022, if you beat Oklahoma, they'd don't let you do it twice. Over the final two games of the Championship Series, Oklahoma would outscore FSU 11-3 to win the 2021 Women's College World Series, adding to their already dominant resume.

Oddly enough, the Sooners found themselves in another controversy during the 2022 WCWS.

Regardless, let that be the lesson in all of this: if you fall off the horse, get back on. Bill Buckner's error in 1986 didn't lose the World Series for the Red Sox. That same team dropped Game 7 to the Mets a few nights later. They still had the chance. JR Smith and the Cleveland Cavaliers had the whole series in front of them and still got swept. Sure, the Pirates didn't have another chance to beat the Braves in 1995, but the message is still the same.

As Oklahoma's 2021 College World Series Victory proves, one loss does not knock you out of the tournament, but a losing attitude can definitely hurt your chances at lifting the trophy.