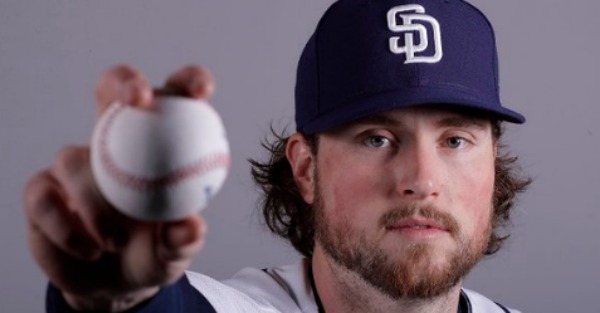 Major League Baseball announced a couple of rule changes recently, but there’s one that appears to be targeted at one specific player.

Under a pitching rule amendment, MLB says a pitcher can’t take more than one step toward home plate during his delivery. If a pitcher violates the rule, the pitch will be termed an illegal pitch and result in a “ball” call if there are no runners on base; if there is a runner on base, it will be a balk.

Enter Carter Capps, now with the San Diego Padres. MLB already had to rule on his delivery and declared it legal once before. But the new rule appears to change that.

Here’s the delivery and you can clearly see the hop:

Because the only way to truly appreciate Carter Capps' delivery is in slow motion 😳 #PadresST pic.twitter.com/uLZHfWlThr

Essentially, the video that went viral of Capps' first bullpen this spring was an illegal delivery. But he's self-corrected the hop since.

See for yourself .. whether the “correct version” shows much of a difference:

Here's video from Carter Capps' live BP Monday. The Padres feel his delivery here is well within the constructs of the new rule changes. pic.twitter.com/2joYEyvxBm

Capps told the San Diego Union Tribune he doesn’t think the rule will have any impact on him.

“They haven’t addressed me about it, so I’m assuming it’s not necessarily just for me.”  I’m sure I had something to do with it, obviously. But I haven’t been contacted or anything.”

It will be interesting to see how umpires interpret  his “new” delivery and the new rule.