Thirty years ago on April 26, 1992, a little boy by the name of Aaron James Judge was born. The next day, he was adopted.

As much as Judge has accomplished and will continue to accomplish -- including possibly breaking Maris' 61-year-old record (fitting, right?) en route to the contract of all contracts -- none of it would have been possible without his parents, Patty and Wayne Judge.

At some point during his childhood, Judge noticed he looked different from his parents. He was also significantly bigger than them -- or anyone else for that matter.

So he asked his parents what was up.

"Nothing really changed. I honestly can't even remember too much, because it wasn't that big of a deal. They just told me I was adopted, and I said, 'OK, can I go outside and play?'" 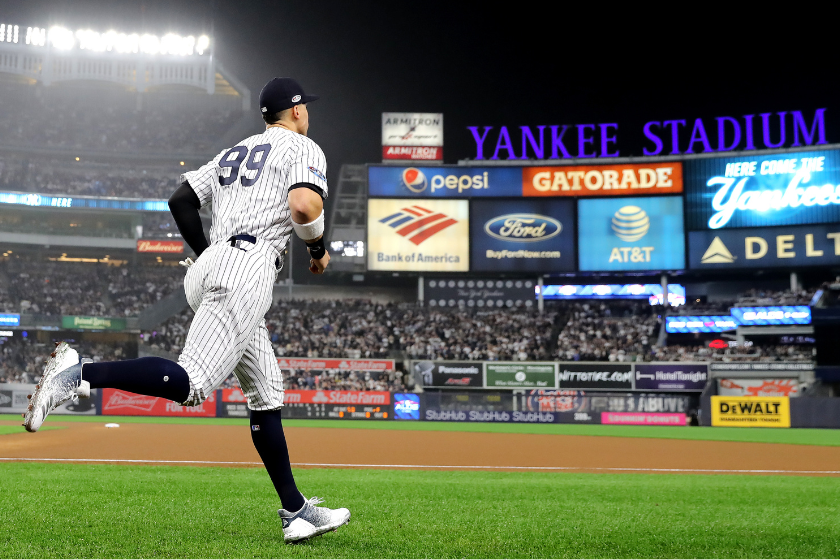 Both his mom and dad worked as school teachers in Linden, California. They had another son, Judge's brother, named John, who worked as teacher in South Korea as recently as 2017, per USA Today.

He Doesn't Know His Biological Parents, And He Doesn't Want To

Contrary to what you might think, Judge has never felt the need to know his birth parents. His adoption was a closed one. I gotta be honest, though, I want to know the pair that produced the 6-foot-7, 282-pound monster.

"I have one set of parents, the ones that raised me. That's how it is," Judge told Newsday.

Patty and Wayne raised one heck of a player and a man. On the field, Judge won American League Rookie of the Year in 2017, is a four-time All-Star and has blasted more than 200 home runs. Off the field, he's founded the All Rise Foundation, which "inspires children and youth to become responsible citizens by engaging them in activities that encourage them to reach unlimited possibilities."

And even Judge admits he's a momma's boy. He still calls her all the time, even while he's been busy chasing records.

#Yankees #AaronJudge is all smiles with him mom & dad, after getting the news that he was unanimously voted the American League's Rookie of the Year! (In case you were wondering - Judge was adopted by Patty and Wayne Judge the day after he was born back in April 1992) pic.twitter.com/fyNFZ0WX2Z

"I know I wouldn't be a New York Yankee if it wasn't for my mom," Judge said. "The guidance she gave me as a kid growing up, knowing the difference from right and wrong, how to treat people and how to go the extra mile and put in extra work, all that kind of stuff. She's molded me into the person that I am today."

As for dad? Well, that would be Judge's hero.

"He's always been my hero, always a guy I looked up to," Judge told People.com.

"Looking back on those childhood memories, I could tell he didn't want to do it," Judge said about playing countless games of catch. "I could tell he was tired. He'd had a long day of work. But he never said no. He never complained, nothing. So for me, that's why he's still the hero in my eyes."

Who's cutting onions in here? I need to go re-watch "Field of Dreams" now.

For Aaron Judge's parents, their son's 2017 season was like a magical dream that seemingly never ended. pic.twitter.com/lcNJOSMXEh

When Judge hit his 60th home run of the 2022 season, tying Babe Ruth's single-season mark, he was quick to embrace his wife, Samantha Bracksieck, as well as his parents inside Yankee Stadium. They're all expected to be in attendance every game until the outfielder ties and breaks Maris' home run record, if he does.

Judge and the rest of the baseball world may never know his birth parents, but it's pretty clear that doesn't matter. Because without Wayne and Patty Judge, there is no Aaron Judge.